I had a meeting with Kimberly Nightingale in Lowertown two weeks ago and, sure enough, we got invited to play around with a Hasbro toy from our youth. 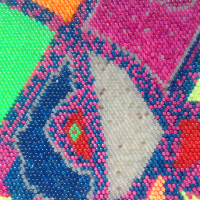 Lite-Brite was a simple toy that must have been heavily advertised on TV because I can still conjure the melody from the early ’70s commercial, “Lite-Brite, Making things with light…”:

Lite-Brite is basically a lightbulb in a box with holes punched in it. Tiny, colorful plastic pegs are plugged in, usually with the guide of a black paper template, to make a pointilliste picture that shines.

Ta-coumba Aiken is the talent behind the Largest Picture Made of Lite-Brite world record attempt planned for the Union Depot. Upon his invitation this morning, we joined a few other volunteers, Duncan and the Rehm family, Phira, Vince and young Devvin, at the Depot in sorting Lite-Brite pegs from their multi-color bags into bins of single colors. A surprisingly soothing activity. 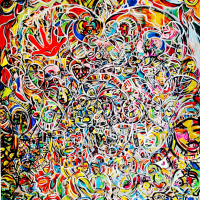 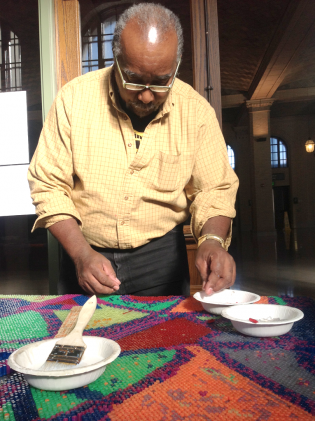 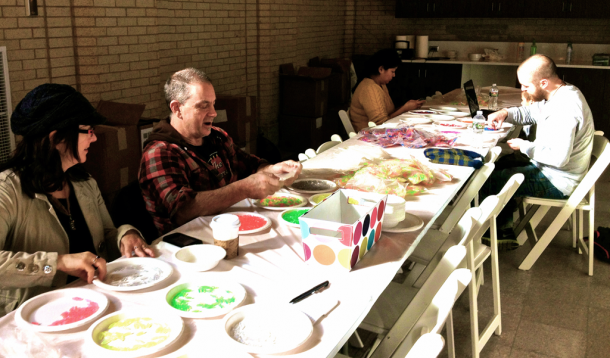 I am told that the bright sculpture will measure 9 x 27 feet and illuminate some 520,000 tiny blue, green, pink and red transparent pegs. Ta-coumba unrolled a canvas study of his design to give us some idea. It was a rollicking dance of color that played like a trompe l’oeil image; words and creatures emerged from the swirl. The longer we gazed at it the more we were drawn in. 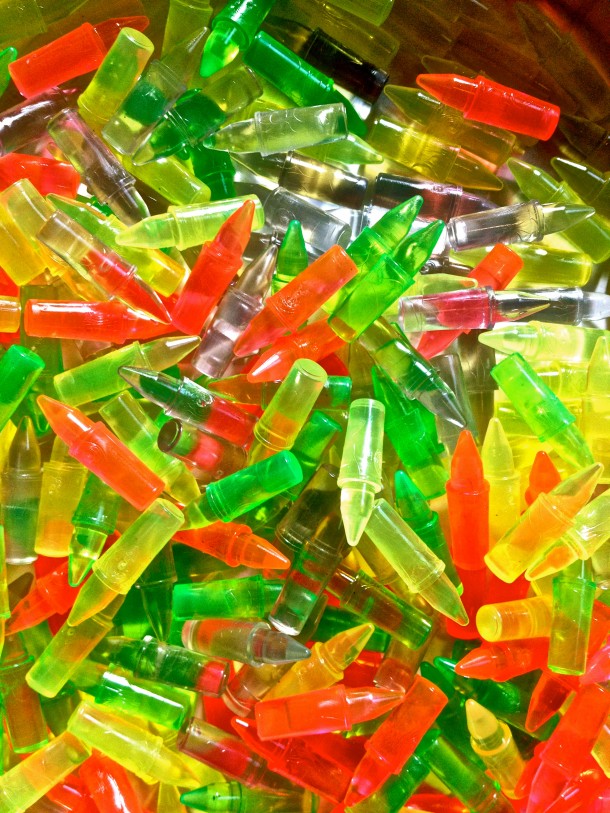 Time-lapse of volunteers working on the Lite-Brite project

The sculpture is set to be unveiled on the Depot concourse February 16 and is a Saint Paul Foundation project. I don’t know more than the word on the street, folks. I am looking forward to something quite beautiful.

A kindly update from Heidi M. Smith at Grassroots Solutions. The Lite-Brite project is part of a launch event for The Saint Paul Foundation’s Forever Saint Paul Challenge, a grant program that funds–to the tune of $1 million–ideas ” to make Saint Paul great!” 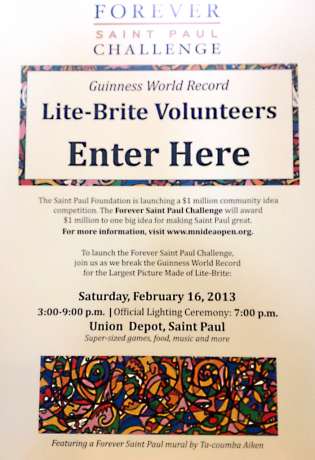 Right: Roll up, roll up! Volunteers needed to help get the project finished before the February 16th unveiling.

The Saint Paul Foundation is partnering with Minnesota’s Idea Open, which distributes philanthropic funding in a way based on the latest trends in community engagement: using technology (think digital suggestion box), competition (think junior high science fair) and the reality TV show model (think American Idol where the winner is determined by viewers). Unlike the usual grant process, this creative idea competition gets lots of people thinking and participating in issues affecting St. Paul. For more information, including guidelines and criteria for sharing ideas, visit Forever Saint Paul Challenge.

The “Lite-Brite” event launch for the Forever Saint Paul Challenge will take place Saturday, February 16. Everyone is invited to attend. If you have not yet visited the newly renovated Union Depot in downtown Saint Paul, this would be a good way to see a great idea that has come to fruition in Saint Paul recently. Nothing says, Forever Saint Paul like our historic Union Depot. Here are the details:

Friends and family are invited to join in as an attempt is made to break the Guinness World Record for the “Largest Picture Made of Lite-Brite.” This giant art installation will be 12-feet tall by 24-feet long and filled with more than 520,000 Lite-Brite pegs. It will feature a mural created by award-winning Saint Paul artist Ta-coumba T. Aiken. 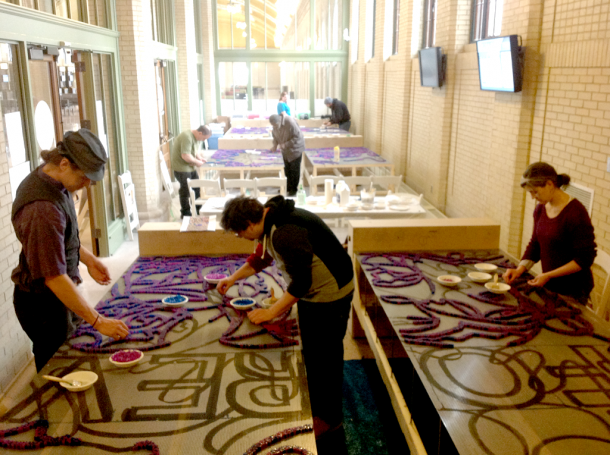 Lisa Steinmann contributed to the 2013 Saint Paul Almanac, has just began her second year as a Community Editor, and recently started serving on the Almanac board. A Saint Paul–based writer, teacher, and artist, Lisa’s work spans both sides of the Mississippi river and other divides as well.