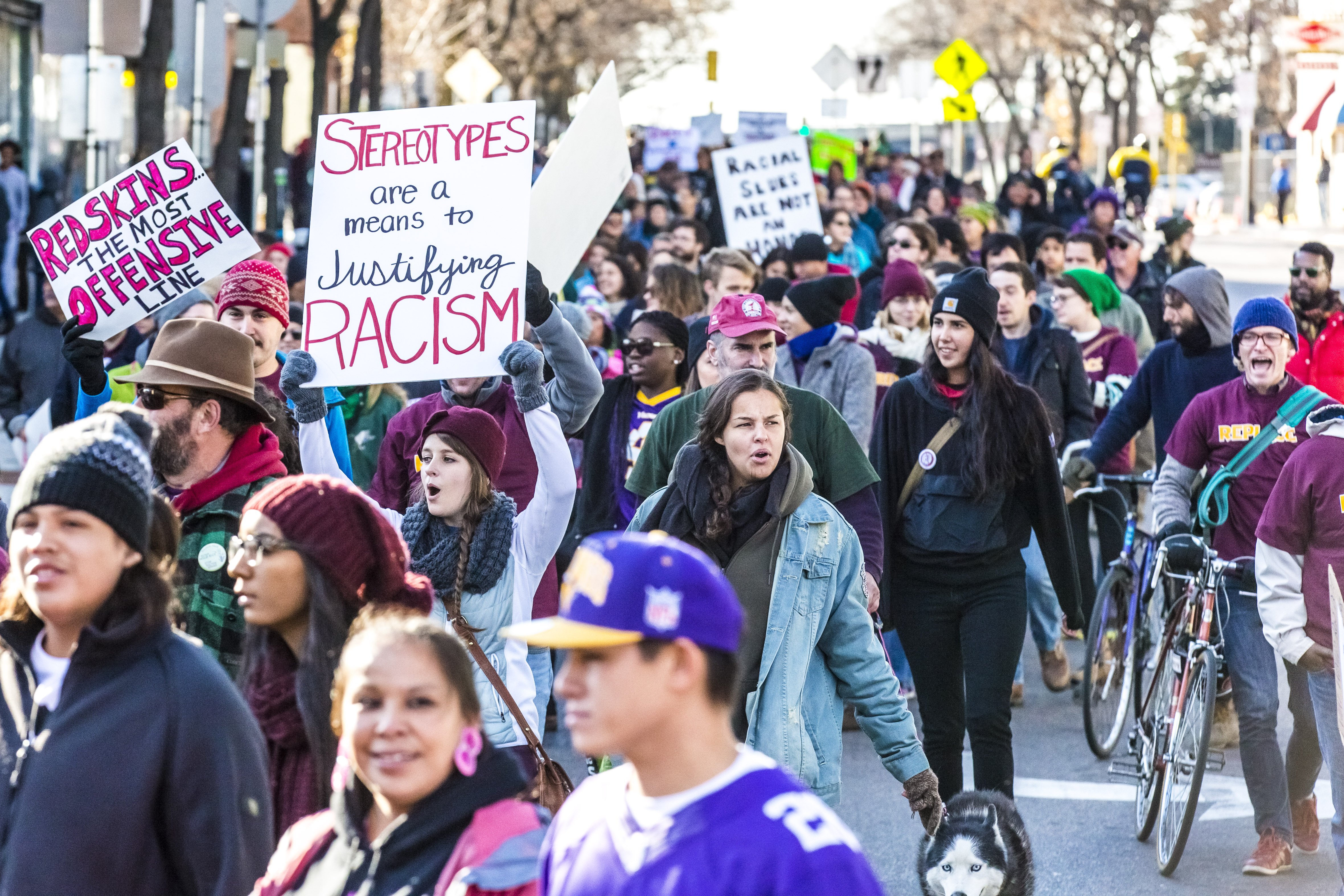 Thousands of protesters gathered at TCF Stadium at the University of Minnesota on Nov. 2 to protest the Washington football team name, which they call offensive.

Native leaders, artists and community members were joined by a host of politicians- including former Governor Jesse Ventura, Minneapolis Mayor Betsy Hodges, Congressman Keith Ellison, Winona LaDuke and many more in what some are calling the largest protest over a sports team name ever.

While numerous sports teams have been targeted over the years for showing images of American Indians as mascots, The Washington football team has born a particular amount of criticism in the last year due to the racial slur of the team’s name.

Rhonda Reese, who walked with protesters from the American Indian Opportunities Industrialization Center (AIOIC), said she was there because “Redskins” is a racial slur. “It’s a bounty they put on the Native people for their scalps,” she said. “It’s negative and it’s derogatory.”

The gathering that started at AIOIC was organized by 14 different local groups including AIM of the Twin Cities, Save the Kids, OccupyMN, Protect Our Manoomin and the Minnesota Two Spirit Society. Besides speakers, hip hop artists Mic Jordan and Tall Paul performed.

“I’m a modern day warrior,” Mic Jordan rapped. “You’re damn right/ I was built to fight/ so I stand up with my people/ and I stand up cause we’re equal.”

Robert DesJarlait, from Protect Our Manoomin, spoke of protesting the Washington football team’s name 22 years ago, when the Washington team played the Buffalo Bills for the Superbowl title at the Metrodome. “I can see these fans at the Washington game running around with phony headdresses on,” he said. “They are so ignorant. They don’t understand what they’re doing. That’s insulting, not just to us, but to our children.”

Rapper Tall Paul said in an interview that the protest was about educating the masses and our kids about what it is to be Native. “There are a lot of people that don’t know that we exist and when they get their imagery of us they get it from people who are not us,” he said. “Only we should get that power to control who we are and I think that’s what this is about. This is about taking back that power.”

There were some amidst even the protesters that wore Vikings shirts, and a few Vikings fans in front of the fraternity houses at the University cheered the protestors on. Not all the Vikings fans, however, were supportive. “The redskins have been a football team for 40-50 years now and I don’t feel that it’s a big deal,” said Bennie Carter, who was dressed in a Vikings costume complete with horns. “It should be an honor.  Just like the Vikings.  The Vikings aren’t disappointed, are they? Dolphins aren’t disappointed for being a dolphin.  It should be an honor.”

The group that started at AIOIC marched over two miles toward TCF Stadium, escorted by Minneapolis police. The march took about an hour, as protesters waved signs such as “No honor in Racism,” a slogan, which also served as a hastag for the protest. “We are people, not a Mascot,” the marchers chanted.

The protest was a culmination of two separate marches. Another group organized by the National Coalition Against Racism, also had arrived from a separate march from Northrop Auditorium.

Among them was U.S. Congressman Keith Ellison, who declared solidarity with the group. “I want to speak directly to my brothers and sisters who are of the original people of this land,” he said. “I want to say to you that the black, the brown, the white- all of us are here with you.  We are here together. We are standing with you and if you are insulted we are insulted. If you are offended we are offended. If any harm comes to you, it’s coming to us too. We are going to fight this thing alongside you until it changes.”

U.S. Congresswoman Betty McCollum also spoke. “Dan Snyder, Roger Goodell and the NFL team owners are exploiting for profit a racial slur, the same racial slur that was used by those who murdered Dakota and Ojibwe brothers and sisters and Native people all across the country,” she said. “If there is any decency in the NFL, the time is now to change the mascot.”

Clyde Bellecourt, one of the founding members of the National Coalition Against Racism in Sports and Media, said he’s been fighting racist team names for 45 years. “All of these mascots have to go,” he said. “Black Sambo is gone, John Wayne is dead. It’s time for America to let it go.”

Former Minnesota governor Jesse Ventura said that he knew something about discrimination as an Independent Governor amidst Democrats and Republicans in the legislature. “You do not state that a name honors genocide,” he said. “We don’t want to honor genocide. Dan Snyder you’re a rich white guy- what the hell would you know about any of this?”