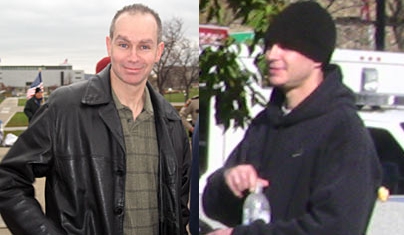 Via an APNewsBreak at the Winona Daily News, Amy Forliti of the Associated Press reports in Minn. man targeted Mexican consulate:

A Minnesota man with suspected ties to white supremacist groups planned to attack the Mexican consulate in St. Paul, believing it would stir debate on immigration amnesty issues ahead of the 2012 presidential election, according to a federal affidavit obtained Thursday by The Associated Press.

Joseph Benjamin Thomas also told an undercover FBI agent he considered himself a “domestic terrorist” instead of an American and would risk his life for the white supremacist movement in the event of a “race war,” the FBI affidavit said.

The document, recently unsealed in federal court, provides new details about the investigation into Thomas’ alleged plan. He was indicted in April on drug charges, though authorities had been watching him and another man since 2010 as part of a domestic terrorism probe.

As Bluestem Prairie noted in a long post when news of the affidavit first broke in late April, Thomas’s interest in neo-nazi and xenophobic activity didn’t begin in 2010. In 2009, Indymedia contributor Jaime Hokanson captured the photos at the top of this entry, writing in Anti-Racists Steal the Show at White Supremacist “Tea Party Against Amnesty”:

That one guy from the Nazi rally!  He’s always there, and he’ll tell you that he’s carrying weapons.  At the raucous Austin rally last month, local police identified him as Joseph Benjamin Thomas, 38, of Mendota Heights.  After trying to join the Nazi rally but being detained when a Mower County Deputy noticed he was wearing body armor and carrying a knife, he was questioned and stated he also had an expandable baton and a stun gun, according to the police report.  He was disarmed but allowed to pick up the weapons later.  At Saturday’s rally at the Capitol, he appeared to pull some kind of weapon in the scuffle after another rally attendee knocked a protester off his bike. (Photo: Thomas at the State Capitol on Saturday (left) and at neo-Nazi rally in Austin, MN on October 17 (right).

In addition to the planned bombing of the Mexican Consulate in St. Paul, Forliti notes other focuses of Thomas’s interest, as well as his engagement with Sam Johnson, who led small neo-nazi rallies in Southern Minnesota in 2009 and 2010:

n addition to the plot against the consulate, the FBI alleges, Thomas had collected license plate numbers of people with Barack Obama bumper stickers and had asked an associate to volunteer at a left-leaning bookstore to obtain customers’ addresses.

The affidavit alleges that Thomas and another man arrested in April, 31-year-old Samuel James Johnson, were trying to form a supremacist group with a militant wing. . . .

The affidavit alleged Thomas wanted to carry out the attack on May 1, a day used in recent years by activists in the U.S. to hold rallies for immigrant rights. But he later said the attack couldn’t happen that day, blaming personal reasons and noting more police were in the area, the affidavit said. . . .

Thomas also suggested placing hoax explosive devices along the May Day parade route in the Twin Cities, saying he had video of prior parades so he could identify parade participants.

As Bluestem noted in April, I spotted Johnson along the parade route of the May 2010 parade, and Craig Stellmacher captured video of the Austin neo-nazi for The Uptake.

Marchers told me that they knew a neo-Nazi named Sam Johnson was following the march video taping it. I fell back and went up to him and asked him if he was with the National Socialist Movement, but he denied it. But I’ve since Googled up his photograph and I’ve positively identified the man as Sam Johnson. He’s repeatedly posted on white supremacy websites, gone before the Albert Lea City Council demanding they do something about immigration reform, and he’s called a rally in his home town in a month too. I imagine we’ll soon see his video of today’s march on his NSM website. I noticed, he never engaged the crowd but always hung back 50 yards or more. Why–he was afraid of them. Craig Stellmacher

Afraid? Or do we learn in hindsight that Johnson was capturing the videotape footage that Thomas mentioned to the undercover FBI agent? Johnson and his videocamera turn up at the 8:44 point in the Uptake/Stellmacher video below:

Bluestem try to get a copy of the affidavit to learn more about what these men had planned and who they identified via parades, licences and bookstore patronage. Stay tuned.