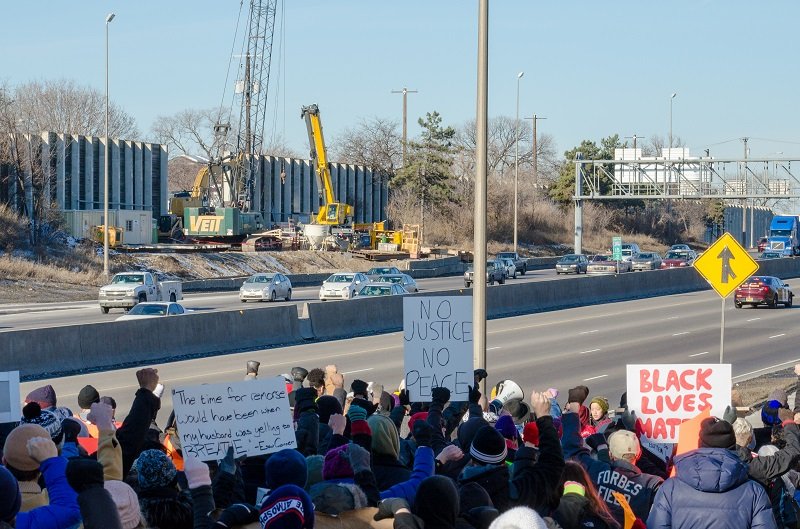 The largest highway in Minneapolis was brought to a standstill on Dec. 4 after protestors marched down a two-mile stretch of I-35W from Uptown to downtown Minneapolis to rally against several recent, high-profile cases of police brutality and racial inequality in the United States.

For more than an hour, northbound I-35W was reduced to foot traffic, with cars backed-up for miles behind the barricade of police cars separating protestors from oncoming traffic.

Thursday’s “Black Lives Matter” protest was part of a national movement to denounce police brutality, racial inequality and a lack of accountability, sparked most recently by the decision to withhold charging police officers responsible for the deaths of two unarmed black men in New York and Ferguson, Missouri.

Around 200 protesters joined the march from Uptown to Minneapolis City Hall.

“People are tired of the opposition, people are tired of police not being held accountable and we’re deciding to take a stand,” said Nekima Levy-Pounds while walking down the onramp near 34th Avenue toward the main stretch of I-35W.

Protest organizer Michael McDowell said the group’s goal for Thursday’s protest was to create change and “not just looking to get a bunch of media.”

The protesters’ goals include a structural audit of the Minneapolis Police Department, quarterly progress reports to the community on racial diversity issues and police misconduct in the city, and body cameras on officers. The group presented them to Minneapolis Mayor Betsy Hodges in an open letter published in the Star Tribune in September.

Hodges, who spoke at a fast food labor rally on 33rd and Nicollet Avenue earlier that day, did not attend the Black Lives Matter protest stating she was unaware of the second protest until she had already arrived.

The two protests began and ended at that same location — a Burger King on 33rd and Nicollet Avenue — and overlapped by a few minutes.

Levy-Pounds said that Hodges has “indicated a willingness” to address issues of racial inequality in Minneapolis, particularly in the police department, but that it would “take a bigger push in order to address the structural inequities that we see,” she said.

Holding signs and chanting rally songs, protesters made their way onto I-35W for the more than two-mile walk, their chants echoing to a fever pitch with each bridge they passed under toward downtown Minneapolis.

Behind a large megaphone, Mica Grimm, one of the organizers behind Thursday’s protest, yelled the names of those recently killed by police officers.

Brown and Garner were two unarmed black men recently killed by police officers during separate events in Missouri and New York. Both officers are white.

The protest was guided down the interstate by a wall of a dozen or so squad cars, which encapsulated the group of walkers from the front and back of the group. Protest organizers wearing orange safety vests walked next to the squad cars and directed walkers from meandering too far from the group.

“This is all one movement,” Grimm said to the crowd. “This is a bunch of people getting together in little pockets and if we can all connect them, we’re unstoppable right?” The crowd cheered in response.

At one point, police officers did instruct protesters to exit I-35W via the Lake Street off-ramp near Uptown, but activists ignored those instructions and continued down the Interstate.

Dorian Harris, a passerby, took photos of the rally with her two teenage children.

“I didn’t know [about the rally] but I appreciate it. I really do,” Harris said. “I really appreciate it because there’s so much going on and it’s not going to stop. So I’m with this.”

Eventually, the rally entered Minneapolis City Hall with additional protesters joining the crowd along the route into downtown.

Gathering in a City Hall rotunda, organizers took turns speaking to the crowd and encouraged them to continue participating in future rallies. Above the crowd on the third floor of the building, another group of activists demanded to speak with city council members, several of whom appeared to discuss racial inequality issues with the crowd.

Almost six hours after the event began, protesters staged one additional “die-in” to mark the recent killings of Brown, Garner and others. Some chanted, “I can’t breathe, I can’t breathe” — the last words Garner said before he died.

“We can’t breathe in this system,” Levy-Pounds yelled to the crowd at City Hall. “Enough is enough.”

Protesters enter 35W via an onramp near 34th Avenue