African Americans in Minneapolis with family members in prison had an opportunity last week to express their anger and frustration over expensive phone charges that make it difficult for them to stay in touch with their loved ones behind bars.

Officials from the Minnesota Department of Corrections (DOC) were invited Thursday to New Salem Missionary Baptist Church in north Minneapolis to answer questions about prison phone regulations as well as payment for court-ordered restitution and fines.

The Rev. Jerry McAfee, church pastor and forum moderator, asked the officials: “Why are the phone rates so expensive, and who benefits from that money?”

Compared with the previous rate, Carlson said, “We’ve a very low debit call rate — that’s when the offender pays for the call by buying phone time through the prison system.”

Carlson defended the phone system and said that the cost generated from telephone calls comes back to pay prison bills:

The money that’s generated from collect calls and the debit calls is used to cover the costs of the phone service that we have, and also it pays for our phone monitoring systems and other security of the system. When those costs are paid for, and if there is still money to use for other purposes, the money has to be used for the benefit of the offender population. And some facilities are able to use that money to pay for that basic television that offenders have available to them. Also it can cover costs for the library and some recreational equipment. Again, it has to be for the benefit of all the offenders.

The DOC contracts with Global Tel Link, a private company that provides telecommunications services to correctional departments throughout the country. The current contract is in effect until March 2015.

Some felons receive money from families and friends as they do their time. Some use the money to buy phone services, others use it for restitution fees they owe to victims.

Sixty-three percent of inmates have court-ordered fines and restitution, Carlson said. Since 1999, the DOC has collected a 10 percent service fee on those moneys received. “The money that’s generated from that cost of confinement fee is used to pay for our library services, laundry service, the offenders’ mattresses, inmate clothing,” Carlson said.

But since April 2013, inmates who owe court-ordered restitution and fines have seen another 10 percent cut in the money sent by outside sources.

About $36 million in court-ordered fines and restitutions has been assessed against those incarcerated in our prisons. One of the things that we have an offender do while incarcerated with us is save money … [for] when they get out of prison. And there is a minimum of $100 that they have to save. But for offenders who have been in for a longer period of time, we’re obligating them to save $500. When they get out, they have at least something in their pocket to make it into the world. So once the offender has saved that gate money, we reduce the amount collected from their wages. 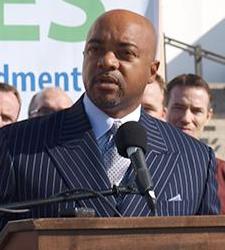 “That speaks volumes to our commitment to victims,” Carlson said. “And we really have not had a lot of complaints from the offenders. A lot of them said, ‘I know I had that hanging over my head, and I’m glad to get it taken care of.’”

McAfee, who is also the president of the Minneapolis NAACP, said the restitution fee, a department issued policy, is unfair to family members assisting their inmates.

“All of us, I’m sure, are sensitive to victims,” he said. “But it seems like those of us who are on the outside giving money to our loved ones to help them, we’re paying the victim and we had nothing to do with it.”

Sharon Brooks, president of Peace of Hope, and organization that helps prisoners’ families, asked DOC Commissioner Tom Roy about what contributes to disparities in the state’s justice system.

Roy told the crowd that longstanding racism, and education and employment disparities, among other things, have contributed to the large minority population in Minnesota’s 10 prisons.

“We’re the receptacles of historical and institutional racism,” he said. “I’ve likened our prisons to slave ships run aground — and that’s a sad comment for me, but it’s such a history in this country. Unfortunately the Correctional Department reflects a lot of failed systems.”