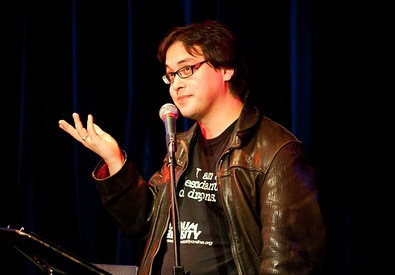 Name: Phillip Andrew Bennett Low
Twitter: “I have a (mostly abandoned) Twitter at @maxverbosity, though it’s worth noting that I found maintaining it so intimidating that I actually hired someone to do so for me for several months.”
Website: “My website is at maximumverbosityonline.org. I’ve written for several blogs on a variety of topics, crawling from one to another like a hermit crab between shells, but movement on all of them is tracked at penner-pott.livejournal.com. Considering where this profile is appearing, courtesy dictates that I first mention my review blog at tcdailyplanet.net/partners/womb-view—frequently updated during Fringe time and only occasionally so year-round—but lately I’ve been hanging my proverbial hat at maximumverbosityonline.blogspot.com.”

What’s your job?
“Clinging to being a full-time writer/performer by my fingernails, which—as anyone who’s attempted this knows—is essentially stitching together a Frankenstein’s monster of part-time jobs and projects such as reviewing, voice acting, et cetera.”

Other than your job, what are your claims to fame?
“If I can reasonably said to have earned any title in my career thus far—er, other than ‘pompous douchebag’—it’s that of a storyteller: I’ve toured about a half-dozen one-man shows across the country and one to Australia, been nominated for numerous awards, produced one reasonably bona-fide hit—Descendant of Dragons—and co-founded the Rockstar Storytellers, serving as its Chair for the two years that position existed. It’s a local supergroup of best-selling solo performers. I was also playwright and producer of a local theatre company, Maximum Verbosity, from 2003-2011, a company that managed to be somewhat well-regarded despite no one attending any of its shows.”

What’s your relationship status? (We can leave this one out if you’d prefer.
“I’m currently in a relationship with my high-school sweetheart, a woman I’ve entered a wrist-slashingly consistent cycle of breaking up with and getting back together with for well over a decade now; she’s a classically-trained vocalist and a frequent behind-the-scenes collaborator on most of my projects. My involvement with her is absolute and unquestionable proof of the fact that we live in an absurd and unjust universe, since Allah knows I don’t deserve her.”

Where are you most likely to be seen?
“My favorite conversation bar is probably the Leaning Tower in Uptown, though I’m also fond of the nearby Herkimer’s. I’m a frequent performer at both Kieran’s Irish Pub and the Bryant-Lake Bowl. After mournfully observing two comic book stores fold in the space next to the latter, I’m delighted to see that an old-school arcade, Rusty Quarters, has set up shop, and I’m cheerfully doing my best to support their business. Gauntlet! They have Gauntlet now!”

Where are you least likely to be seen?
“Warrior needs dives, badly. I have whatever the gastronomic equivalent of anti-intellectualism is, and a consequent dislike of the hip, the trendy, the crowded, the expensive. I go out to drink and to talk, and as far as I’m concerned, the removal of anything that gets in the way of that is exactly what we have a Second Amendment for.”

With whom are you most likely to be seen?
“Lately I’ve been palling around with Ben San Del, a frequent collaborator—we’ve written two top-five best-selling shows at the Fringe together—and stand-up comic. He won the “Funniest Person in the Twin Cities” contest a few years back, and has been apologizing for it ever since. We apparently make a convincing enough gay couple that we’ve been seated in romantic, candlelit booths when seeing shows together.”

Where were you born?
“I was born in Rochester, Minnesota, at St. Mary’s Hospital. I came into this world naked and surrounded by nuns, and imprinted on that scenario like a frightened duckling.”

What neighborhood do you live in now?
“I live in St. Louis Park, on the very cusp of the Minneapolis border; I can and frequently do walk right into Uptown.”

What’s your ride?
“I do own a car, but my loathing of traffic, parking, and paying for gas means that I generally only use it for touring, relying on public transit or my own two stubby legs for getting around in town. In other words, I’ve gone green for purely selfish, not altruistic, reasons; I still loathe this Earth and long for its destruction.”

What’s the best way for someone to start a conversation with you?
“Show me a picture from your collection of images of my face cut out and pasted onto the bodies of various naked celebrities, male or female. This will set in course a series of events that will almost inevitably end with one of us in prison, the hospital, or the morgue. This is, of course, for a given value of ‘best.'”