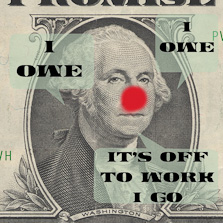 Speaking as both an armchair economics geek and a political comedy writer, I have a great interest in the problem of writing jokes about economics. The problem, I find, is that so much of comedy revolves around shared knowledge and shared experience, and the vast bulk of audience doesn’t give a shit about macroeconomics. You can find yourself in the strange position of having to give almost a mini-lecture to an audience to educate them on a subject to a sufficient level of being able to grasp a given joke. The alternative is doing the glib and superficial thing (e.g. making a joke about how paying taxes sucks, versus trying to build some riff on the whole underlying system and the invisible gun and the audience’s eyes are glazing over…)

So there’s a strange tension, in a show of this nature, between conveying information and telling jokes. What was the major event for our species in the cradle of civilization ten thousand years ago, he asks? The agricultural revolution, I think, and everything that came with it – construction of stable cities, specializing of individual professions, et cetera. Beer, is the answer he gives, and proceeds to riff on it for about five minutes. And, wait – I’m prepared to consider your premise, but I need more information than this. I mean, the brewing of beer occurs in relatively isolated tribal societies as well, yes? So there’s a part of my brain running off and wanting him to cite sources. And, of course, that would be the absolute death of a comedy show.

Likewise, later on, he jokes about our crazy Uncle Sam, who doesn’t let us swear or look at naked women, but buys us guns. And while the rest of the audience is laughing and having a great time, I’m thinking, wait – who is Uncle Sam in this scenario? The government? That doesn’t make sense. The government’s never given me guns, or tried to stop me from swearing or looking at naked women. Unless he means some sort of collective cultural force that does those things, but Lord knows I don’t live and work in a community like that. I can’t laugh at the joke, because the metaphor doesn’t make sense to me.

And on it goes. A red flag goes up for me when he claims that trickle-down economics has been “thoroughly debunked”, because it’s always a red flag when people claim there’s no debate to be had in hotly-debated issues. And he’s off on another metaphor, ridiculing a trickle-down paradise of capitalist deer and corporate rabbits, and I’m still five minutes back.

(Saying in my head, no, the very reason that both sides can argue economics indefinitely is because economics is a complex system, and while trends within complex systems can be mapped over time, it’s extraordinarily difficult to accurately correlate cause and effect, despite how confidently both Republicans and Democrats claim to be able to do so, and once again even pausing to *consider* these very problems would kill the show dead. But the problem I find myself having is that by *not* engaging with these complexities, the jokes often come off as manipulative – at their worst, becoming the very thing that they’re ridiculing – and I’m intensely resistant to that in comedy.)

So I’ve once again composed a review picking apart my frustrations, and I’ve probably made it look like I hated it, which isn’t at all true. In fact, I think that the very reason that all of these issues leap out at me is because of how admirably ambitious the whole thing is. He proposes a history of freakin’ money at the top of the show – so, yeah, it comes off as meandering and disjointed. It’s easy to be focused when you’re doing a storytelling show deconstructing your own sex life. So, did I find it wholly satisfying? No – but, man, I’ve just got admire the damn testicular fortitude of the thing.