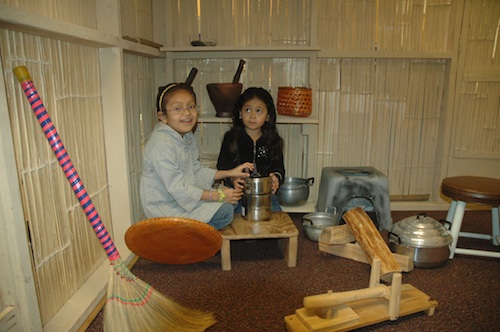 About five years ago, Phalen Lake Hmong Studies Magnet, which was previously Phalen Lake Elementary, responded to the needs of their high population of Hmong students and parents by introducing programming that focused on Hmong culture. Like other schools that we’ve profiled here at TCDP in the past few months, the cultural programming was chosen as a means to improve the achievement gap. At Phalen Lake, that effort has succeeded. The school’s math and reading scores have gradually increased, and the school is doing especially well for their EL learners.

The Hmong Studies program began in 2008 as a result of interest from parents and community members, according to principal Catherine Rich.

“We began our first year as a Hmong Studies magnet with professional development provided by experts from the community, “talking about different aspects of Hmong culture and the Hmong community from a variety of perspectives,” she said. The training sessions involved different stakeholders sharing what they had to offer. “You could hear a pin drop,” she said of the sessions. “It was extraordinary.”

The school pulled together a team made of largely Hmong staff, elders from the Hmong community, and experts from the University of Minnesota and Concordia.

Much of the curriculum for the school has actually been translated by staff at Phalen. Unlike French, Chinese, Spanish, or other language immersion schools, where educators can obtain curriculum from countries where the language is spoken, obtaining Hmong curriculum is a little more difficult.

Since the school began the Hmong Studies program, it also adopted a Hmong Dual Immersion program in 2011, as a means to close the achievement gap. The program began with one Dual Immersion kindergarten class the first year, with one kindergarten and one first grade dual immersion class this year, out of five classrooms for each grade. 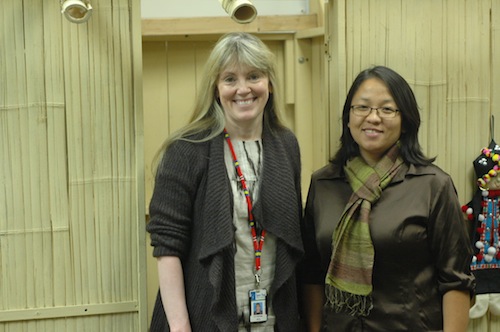 Both the dual language and the Hmong Cultural Studies program help students “move into a multicultural global world,” Rich said, and help them gain “multiple perspectives in communities.”

For Hmong students, the program allows them to “see themselves in the curriculum,” Rich said. To see the language prominently displayed “affirms their place in the community,” she said.

Ying Vang has been a parent with Phalen Lake nine years, even before the school had a Hmong focus. Her eldest, an eighth grader, went to the school a number of years ago, and two of her children attend the school now. She said she’s more involved with the school these days, and loves the staff and believes in the principal, Catherine Rich. Vang said Rich is always open to feedback from parents.

While Vang works full time, she attends as many community events at the school as she can, which happen about once a month. From Carnival, the big fundraiser for the PTO that happens each spring, to Math Night, to Showcase, where the students show off their talents, she’s gotten to know all the teachers and likes feeling part of the school’s community. 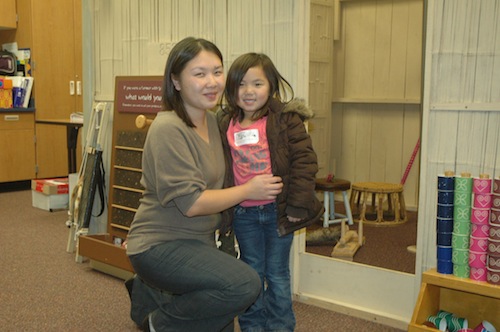 Though she’s Hmong, Vang says she has a neutral feeling about the school’s cultural programming. Because she teaches her children her own traditions at home, anything they learn in school is a bonus, although sometimes her students learn some of the things more deeply when they are in a school setting.

What she also likes about the school is its Gifted and Talented program. When her eldest went to the school, there was only one GT teacher, and now they have two, so her third grader, who is very fluent in English and prefers to speak it, is getting the challenges that he needs in the classroom.

For parents who want their children to receive additional Hmong language education, there is a Hmong Literacy program, which happens for roughly 30 minutes a day in reading and writing, available for students in third through sixth grade. The demand for the course is fairly high, Rich said.

Hmong Culture for Everyone

For students who are not Hmong, the program helps them deepen their understanding of their own culture, Rich said. The school has 77.5  percent Asian students, according to the Minnesota Department of Education, nine percent Hispanic, nine percent African American, four percent white and .1 percent American Indian students. 82 percent of its students are English Language Learners, 11 percent are Special Ed, and 92 percent are eligibile free or reduced-price lunch.

Paul Mora and Maria Guevara, who are both from Mexico, send their two children, in pre-kindergarten and second grade, to the school. “I like everything about the school,” Guevara said. “The school is always teaching the kids to respect others.” She loves the school’s anti-bullying program, and believes her kids are learning fast academically.

They also appreciate that their children are learning about different cultures (and have gotten some Mexican cultural curriculum, too).

One of the main challenges that the school faces is closing the achievement gap, Rich said. “Our overarching goal is for all our students to become proficient in literacy and math,” she said, in addition to becoming global citizens who are present and engaged learners.

Both Dual Language and Hmong Studies are two tools in closing that gap, Rich said.

Another challenge, Rich said, is for students to get comfortable using academic language, so teachers spend a lot of time speaking and listening and engaging with the content and materials.

In math, the school’s scores for 2012 are similar to the city-wide proficiency percentage, at 39 percent for the school. That’s comparable to 40 percent in St. Paul Public Schools, although lower than the 61 percent statewide average, according to MDE.  That’s slightly higher than the school scored in 2008, when their math proficiency was 35 percent, although they’ve taken a dip since 2010, when their scores were at 52 percent proficiency. (Math testing has changed since 2010, resulting in lower scores statewide.) 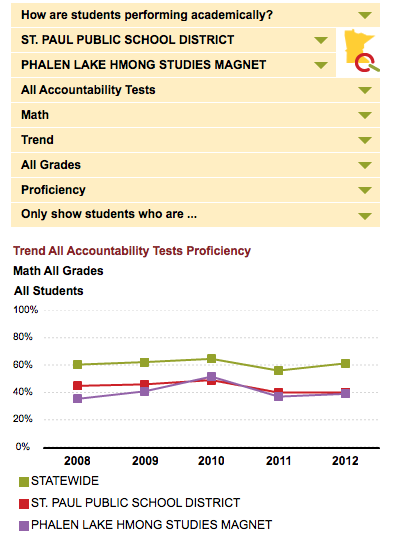 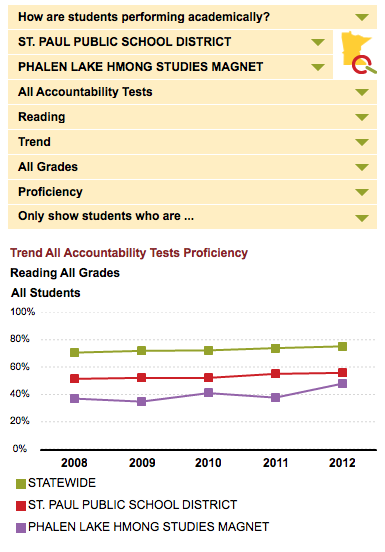 If you look at ELL learners, Phalen is actually doing better than the state average and the SPPS average. Phalen ELL students are 36 percent proficient in math in 2012, compared to 30 percent statewide and 29 percent for St. Paul Public Schools. 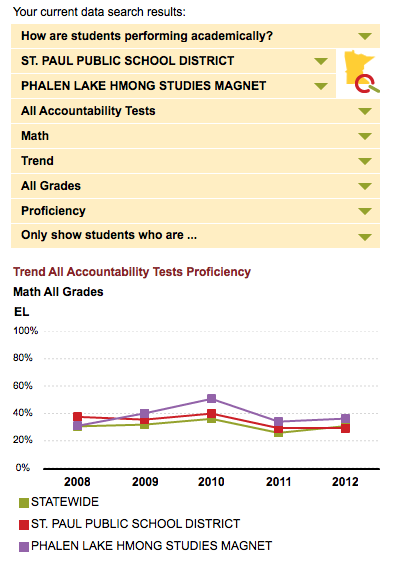 In reading, Phalen ELL students are 42 percent proficient in 2012, compared to the statewide average of 38 percent and the SPPS average of 39 percent. 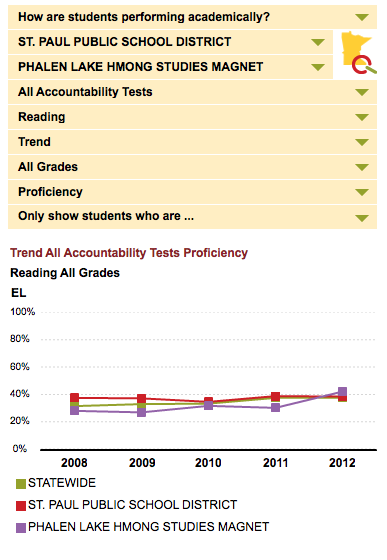 Black students also perform better in reading at Phalen than the state and citywide averages, achieving 58 percent proficiency in 2012, and above the city average in math in 2012, at 29 percent. 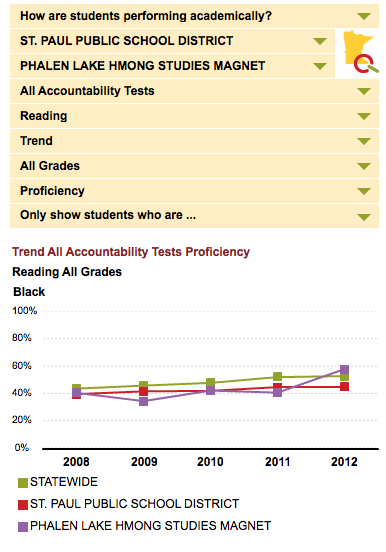 Neftali Ramirez, who works in the family room, says the staff works with roughly 4-5 parents a day, and talks to about three times as many over the phone each day.

The family room is also populated with volunteers, such as Lucille Sims, a “Folster Grandparent” through the Lutheran Social Services. A former teacher’s aide, Sims volunteers five days a week, mostly listening to students read to her. “I love the program,” she said.

The school also has two replicas of Hmong traditional housing. One of them is in the resource room, or “The Hmong Museum,” and contains pots and pans and other object that might be found in a traditional Hmong home. The resource room “can teach about cultural village kinship,” said Mai Lee Xiong, the Hmong Studies Curriculum Coordinator.

The resource room is also where monthly storytelling takes place. Some of the stories are traditional Hmong tales, while others come from other parts of the world, but they always start in the way that most Hmong stories begin, Xiong said.

The other Hmong traditional home is found in the school’s library. While the fire marshals made the school take down the thatched roof, the home is part of cultural programming that includes oral history DVDs created by Phalen Lake students and faculty.