For hours Maia Rumpho-Stellpflug scouted the alleys of Northeast Minneapolis in search of Willy, a wiener dog who’d escaped from his foster home.

It was early October and Maia, director of the Columbia Park-based nonprofit Pet Project Rescue, began to notice another species out on the loose.

“There were cats everywhere,” she remarked.

The author is a volunteer foster parent with Pet Project Rescue.

From dogs who have puppies because their owners can’t afford to have them fixed, to homeless outdoor cats that constantly procreate, there are more unwanted animals across the city than there are homes for them, Minneapolis Animal Care and Control (MACC) Manager Dan Niziolek said.

Between January and October of this year, 2,588 animals were brought into MACC after being surrendered by their owners, brought in as strays, or acquired for other reasons by Animal Care and Control officers.

Sixteen percent were adopted by new families or taken in by rescue groups, while 15 percent were returned to their owners, according to Niziolek’s figures.

Niziolek said the dogs who end up at MACC tend to fare better than cats in terms of finding homes. The exception are bully breed dogs, he said, which Animal Care and Control releases only to rescue groups and not individuals.

“When you look at the animals we’re taking in, it comes down to responsible pet ownership,” he said. “We can’t keep up with finding them new homes.”

On a chilly late October morning a crowd of pet owners from across the metro area huddled in the parking lot of Animal Care and Control. Their dogs tugged on their leashes and cats waited in carriers.

They were there for the low-cost spay and neuter clinic being provided by the Minnesota Spay Neuter Assistance Project, or MNSNAP.

The nonprofit, which has converted a fullsize motor home into a mobile operating room, provides an immensely popular service. A look at their website shows the events, which are held around the metro area and in other parts of the state, can be booked months in advance.

To be eligible, pet owners have to show proof that they’re participating in one of the state’s needs-based public assistance programs, such as Medical Assistance or food stamps, or that they have an annual household income of $40,000 or less.

Inside the narrow clinic, the waiting dogs whined, barked and peered from the cages
lining the walls. MNSNAP founder Veterinarian Kim Culbertson and her two assistants swiftly dispatched their work. The doctor, who lives in North Minneapolis, has performed thousands of spay and neuter operations.

Culbertson got into spay-neuter work because she wanted to attack the problem of
pet overpopulation at its roots. But like Niziolek, she places ultimate responsibility
back onto pet owners. In her travels to locations in South America and Europe, she
added, she’s seen people better prevent unwanted pet pregnancies.

“Intact [non-neutered] animals are on a leash,” she said. “They’re not running around
willy-nilly, reproducing.” 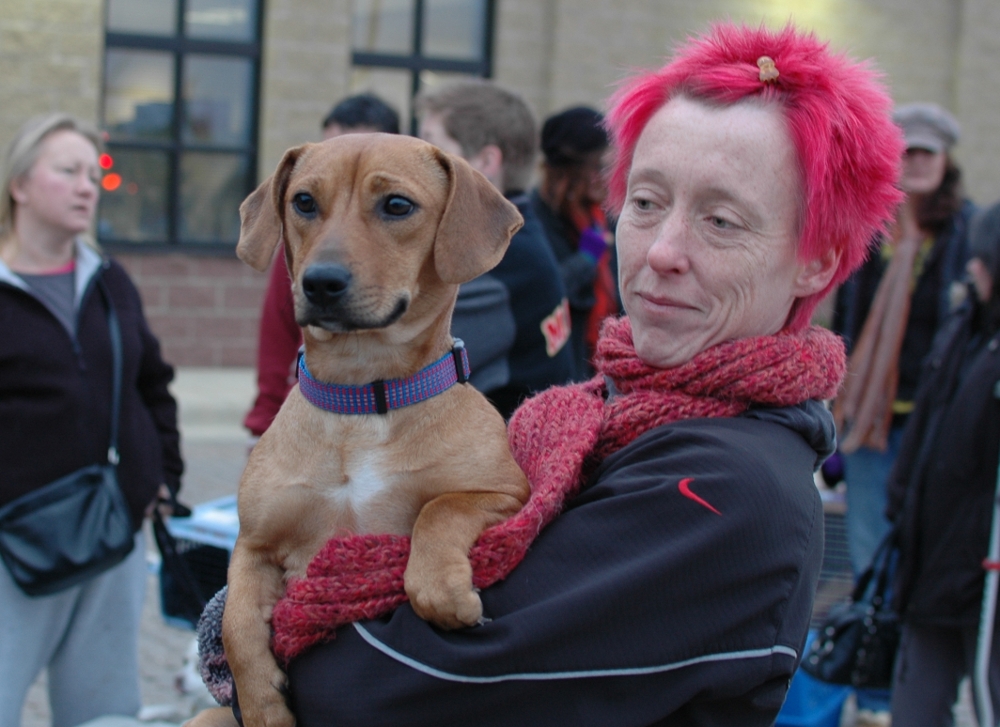 Anitra Francis of North Minneapolis holds a dog she fostered during the recent Minnesota Spay Neuter Assistance Project clinic outside Minneapolis Animal Care & Control. The dog was adopted by a NE resident and named Mitzy.

Several Northeast residents brought their pets in to the clinic, including Diane Sharbono, who lives in Sheridan. She was with Skooter, a trembling rat terrier/chihuahua mix. The little guy had sired a few litters in the past, and now, at 6 years old, it was time to have him neutered, she said.

Cynthia Hobley of St. Anthony West brought in her young cat Jazzy, who a friend
had discovered in a garbage dump near the Red Lake Indian Reservation. When he was found, his umbilical cord was still attached.

Hobley adopted Jazzy to help her friend, but the clinic’s $40 surgery fee and the additional charge for vaccinations were still too much for her tight budget.

The MNSNAP folks gave her a grant so that Jazzy could get the care he needed but she couldn’t afford, Hobley said.

And so by 5 p.m. that day, Jazzy was back in Hobley’s home, a bit groggy but fixed.

Willy the long-haired dachshund eventually made his way back to Pet Project Rescue, where he’s still waiting for someone to adopt him.

Pet Project Rescue took in the 5-year-old dog after his owner surrendered him to MACC. They’re one of 13 area rescue groups, Niziolek said, that takes in the city’s animals that could otherwise be euthanized.

Seeing all those loose cats while she searched for Willy – and all the MACC cages filled with cats and kittens surrendered from Northeast – made Rumpho-Stellpflug rethink her organization’s approach.

“We recognize that the rescue can be kind of a Band Aid to the problem,” she said. “We want to get ahead of the problem and prevent the numbers of animals that are going to Animal Control in the first place.” 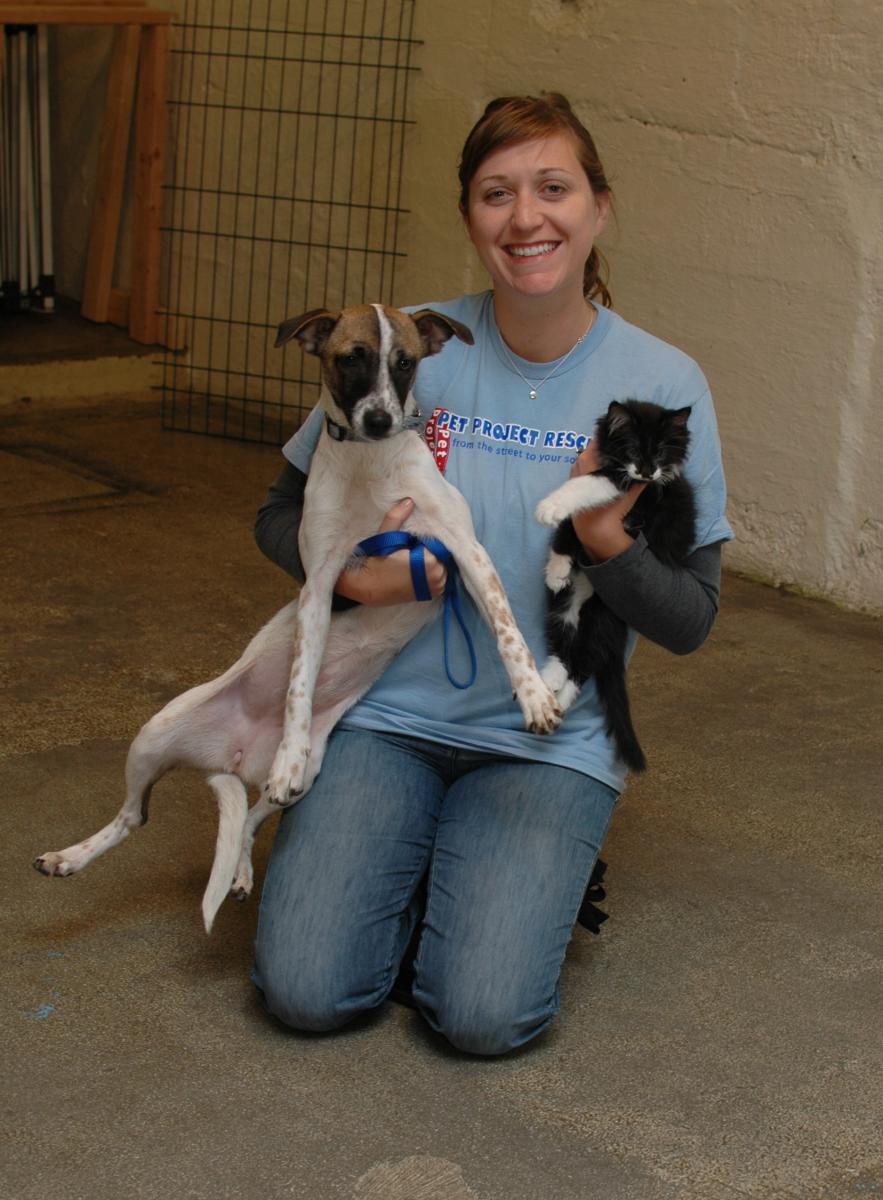 To that end, Pet Project Rescue is partnering with MNSNAP to host its first-ever free spay/neuter clinic for unowned, free-roaming cats. The event, which will be held Feb. 22 outside Animal Care and Control, will target cats from Northeast Minneapolis and the area of Southeast Minneapolis near the University of Minnesota campus.

Pet Project Rescue has already raised nearly $2,000 toward the cost of the clinic, which will alter and vaccinate at least 40 cats. Now it’s looking for volunteers to trap roaming cats, bring to them to the clinic and then care for them after surgery. Once they’ve recovered,
they’ll be released back into the area from which they came.

Within the animal welfare community there’s disagreement about this approach: Some, like Frieda Wilson of the Minnesota Spay/Neuter Project, think these feral or community cats shouldn’t be released back into the environment, because their presence can encourage other people to dump unwanted pets there.

But others, like Rumpho-Stellpflug, see it as an important step in the right direction.

“We want to make sure Northeast and Southeast Minneapolis are one, a better place
for the animals,” she said, “and two — that they’re an example of what can be done.”