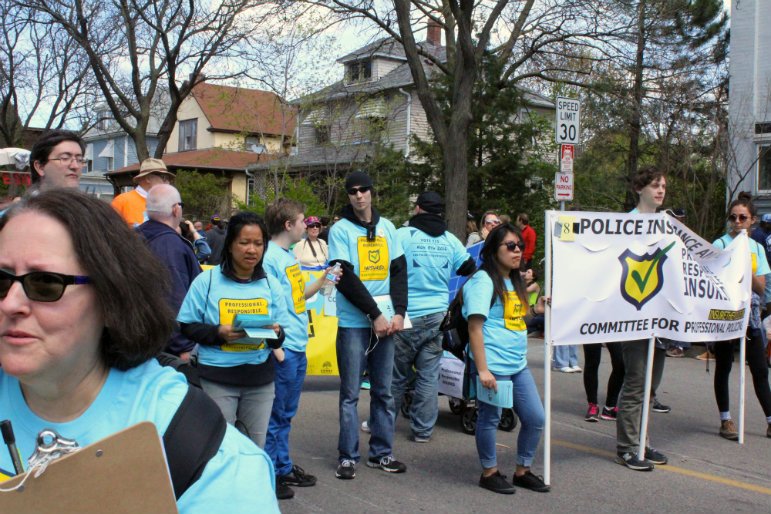 Volunteers with the Communities United Against Police Brutality march in the 2016 May Day Parade. Photo by Cristeta Boarini.

In November, Minneapolis could be the first city in the nation that requires law enforcement officers to carry their own personal liability insurance.

With cases like 24-year-old Jamar Clark, unarmed and fatally shot in the head by two Minneapolis officers, the majority of police involved in or accused of misconduct often get away without charges or consequences.

Committee for Professional Policing (CFPP) is campaigning to pass a liability insurance amendment, Insure the Police, to the Minneapolis City Charter in efforts to promote police accountability when it comes to brutality. This marks the second year CFPP has attempted a petition to get the measure on a city ballot.

Just as doctors are required to carry their own malpractice insurance, CFPP’s proposed amendment would require police officers to pay for their own liability insurance, rather than have the city foot the bill. CFPP structured their amendment with local advocacy group, Communities United Against Police Brutality.

CFPP first introduced their campaign in 2014. However, the group was unable to gather the estimated 7,000 signatures needed to be considered for the ballot at that time.

“It is very difficult to petition to get on the ballot,” said David Bicking, chair and one of the various founders of CFPP since the group’s formation as a political committee in 2013. “It seldom happens for any grassroots group to muster enough signatures.”

But now, along with having several more volunteers to increase outreach in the community, as well as the increased awareness and struggle against police brutality, has made the concept of holding police responsible for their own liability coverage seem more plausible.

“When we started three years ago, that was before the Michael Brown incident, and then Eric Garner,” said Bicking. “The nature of things have changed considerably in terms of people being aware of the issue and concerned about the issue.”

But as awareness for police misconduct grows, so have the costs of settlement cases and the push for change.

Since 2010, the city of Minneapolis has paid nearly $12 million to settle lawsuits of officer misconduct. In addition, a 2013 Star Tribune report stated that from 2006 to 2012, $14 million had been spent on alleged misconduct cases in Minneapolis, with police rarely disciplined for their actions. That’s a lot of money coming from the pockets of taxpayers–the very people the police have sworn to protect.

The CFPP amendment requires police to purchase their own professional insurance and allows the city to pay an agreed-upon base rate of the insurance. Any additional premium costs, due to any lawsuits or complaints against the officer, would be paid for by the officer him or herself.

“So far as we’re aware, no city in the United States or local police department has the requirement that officers have their own personal professional liability insurance,” Bicking said. “And that’s what officers need. It’s a personal responsibility.”

According to Lt. Bob Kroll, President of Minneapolis Police Officers Federation, it’s in their labor agreement with the city that Minneapolis provides liability insurance.

“This will not change,” said Kroll. “The only people not convinced of this are anti-police activists that are still trying to pursue this.”

The most updated language of the current labor agreement between the city and the Minneapolis Police Federation, found online at the city government website, is the 2012-2014 agreement period. Article 26 of the contract states when it comes to liability insurance, the city may at its discretion maintain a standard policy of liability insurance and shall pay all premiums for such coverage.

Cole Yates, campaign manager for Insure The Police, asserts there is nothing specifically in the union contract that requires the city to provide insurance.

“The union leadership is going to be against this because bad cops, for some reason or another, find themselves in leadership,” said Yates.

Bicking said the great majority of officers never have a lawsuit or a complaint, and will have no trouble receiving insurance at the base rate under the CFPP amendment. But officers with a bad history, it will hurt them.

“If officers are too high [in cost] to cover, it weeds them out so that they can’t work in the city,” said Bicking.

According to Yates, that is precisely the reason why officers like Kroll want the amendment petition to fail to make the ballot.

“There’s no way he’d be able to get insurance coverage based off his record,” Yates said.

Various reports have highlighted Kroll’s history of lawsuits and disciplinary records regarding civil complaints, the use of excessive force and racial comments.

The Insure the Police amendment “is not an anti-police measure,” said Yates.

“This is an anti-police brutality, police accountability measure. And that’s a really important distinction to make,” Yates said.

The national nonprofit advocacy group Cop Crisis states on the scale of accountability in America, only one percent of cops are indicted in less than one percent of killings, while the indictment rate for citizens is ninety percent.

“I do see when there’s a pattern of this happening with officers how insurance can help slow down some of that abuse of power,” said Michaela Day, St. Paul resident and local activist. But “having insurance alone is not going to be enough to prevent more deaths at the hands of police officers that react to communities of color.”

Day has been involved in activism since the 1990s as a teenager in high school. Currently, she works with the Twin Cities Coalition for Justice for Jamar while supporting various St. Paul and Minneapolis Black Lives Matter movements involving police brutality.

Although supportive of the amendment, Day is concerned the law could pacify some of the current movement and momentum toward having police accountability without completely addressing the root problems.

“I understand the argument of why that could help prevent some of the cops that are allowed to abuse their power and authority over and over and over again,” Day said, “But I don’t think it will help enough unless we actually address the culture coming from the top down.”

For CFPP, making the ballot in November would be a crucial step towards addressing those larger issues of police misconduct.

“That will give us an easier time campaigning. Knowing that it’s something people will be voting on,” Bicking said. “The sooner we do that, the sooner we gain that boost to the campaign really, knowing you’re on the ballot.”

The deadline to submit the petition is mid-July. CFPP states they already have more than the amount of signatures needed. Still, they plan to continue their outreach as much as possible, such as attending this month’s May Day Parade and other community events.

“Petitioning is a great way to get out and talk to people. We’re spreading the news about it every time we go out,” Bicking said.

The full text of the proposed amendment to the Minneapolis charter is as follows:

“Each peace officer appointed in the police department must be licensed as required by law. Each such licensed officer may exercise any lawful power that a peace officer enjoys at common law or by general or special law, and may execute a warrant anywhere in the county. Each appointed police officer must provide proof of professional liability insurance coverage in the amount consistent with current limits under the statutory immunity provision of state law and must maintain continuous coverage throughout the course of employment as a police officer with the city. Such insurance must be the primary insurance for the officer and must include coverage for willful or malicious acts and acts outside the scope of the officer’s employment by the city. If the City Council desires, the city may reimburse officers for the base rate of this coverage but officers must be responsible for any additional costs due to personal or claims history. The city may not indemnify police officers against liability in any amount greater than required by State Statute unless the officer’s insurance is exhausted. This amendment shall take effect one year after passage.”

A successful ballot measure would not only help address root problems of police brutality in the community and in law enforcement leadership, but act as a pathway towards other grassroots campaigns fighting against police misconduct across the nation.

“It’s a project beyond the scope of just one group, the CFPP or anybody to do something like this,” says Bicking. “I think it just takes, especially when you have a new concept, a small group of dedicated people who really believe in it and who are putting forth a tremendous amount of work to get it out there.”