We haven’t had a Peruvian restaurant in the Twin Cities since Machu Picchu closed four years ago, so I was delighted to discover Uchu Peruvian Cuisine recently in Plymouth. From what I can tell, Peruvian cuisine has a lot of similarities to Ecuadorian, and some of the dishes on Uchu’s menu seem pretty similar to what you can find at places like Guayaquil, Los Andes and Cocina Latina – dishes like cebiche con mariscos –  shrimp, calamari, octopus and scallops marinated in lime juice ($12.95), shown here; and lomo saltado, strips of beef tenderloin sauteed with tomatoes, onion and soy sauce ($14). (What’s soy sauce doing in a South American dish? Chinese restaurants are quite popular in South America, and a version of fried rice called chaufan or chaulafan is a staple dish in Ecuador and Peru,) 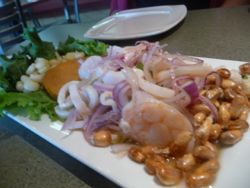 But Uchu does have some distinctive features that set it apart from its Ecuadorian counterparts. Uchu means chili pepper in Quechua, the native language of Peru, and several of Uchu’s dishes features distinctive varieties of capsicum that are native to Peru – the uchu amarilla, and the uchu panca. I am not sure I could distinguish these from other chili varieties, but the dishes I sampled were robustly flavorful – especially the arroz con mariscos, a rice and seafood dish seasoned with a blend of both peppers ($15), and the parihuela, a seafood chowder in an uchu panca broth ($15) that has a distinct resemblance to cioppino. 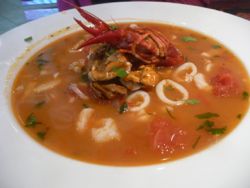 The other difference between Uchu and the Ecuadorian cafes in Minneapolis is largely a matter of style and gastronomic refinement. While places like Guayaquil and Cocina Latina are no-frills cafes that cater largely to an Ecuadorian clientele, and serve up traditional staples in big portions at low prices, chef-owner Jorge Sarmiento at Uchu operates more of the amenities that a suburban clientele is likely to expect – a  more stylish contemporary decor (or as much style as you can muster in a suburban strip mall location), and more attention to presentation.

There is a lot more on the menu I would like to try, including the cau cau de mariscos, a dish with African roots traditionally made with beef tripe, but prepared here with mixed seafood, uchu amarillo potatoes and mint ($12.95), and the tacu tacu, a rice and bean dish served with steak, fried egg and plantain ($14). 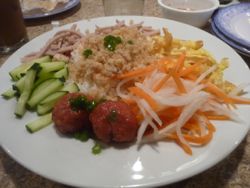 A reader tipped me off to the Blue Lagoon, a Vietnamese restaurant in St. Paul that features regional dishes from Hue, the ancient royal capital, along with an extensive menu of other Vietnamese and Chinese dishes. Some of the Hue specialties are only offered on weekends, and then only some of the time. A couple of interesting-sounding items were not available on either of my weekend visits.

I did enjoy the dishes I sampled, including a signature bun bo Hue, a spicy pork and beef noodle soup ($6.95), the mi quang, a soup prepared with egg noodles and roast pork in a savory broth with roasted peanuts and sesame rice crackers ($6.95); and the com am phu, (Nite Time Rice) an attractively presented plate of rice garnished with cucumbers, marinated strips of carrot and radish, omelet, meatballs, Vietnamese ham and ground shrimp, accompanied by nuoc mam, the pungent Vietnamese fish sauce. banh bot loc, little dumplings of crunchy baby shrimp encased in glutinous tapioca flour and wrapped up in pieces of banana leaf. I wouldn’t rank the Blue Lagoon in quite the same league with the Twin Cities’ best Vietnamese restaurants, but if you are curious about regional specialties and live nearby, it’s worth a try.