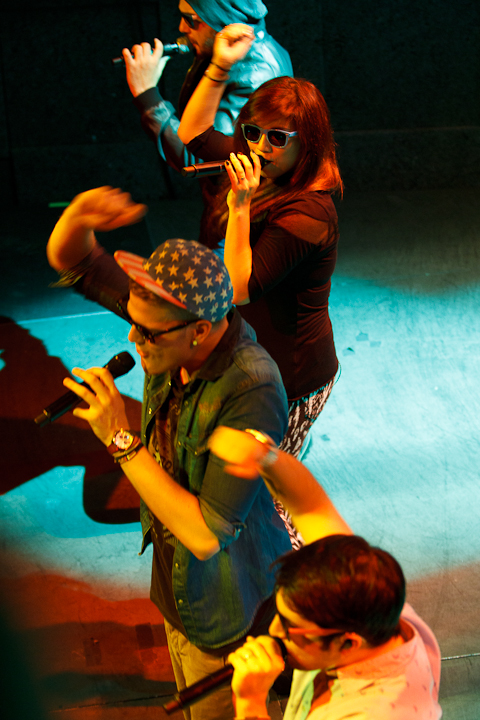 As seasons come and go on the seemingly endless selection of reality TV singing competitions, many of the winners don’t end up doing much and are simply forgotten. The a capella vocal group Pentatonix, on the other hand, is doing all the right things to expand their exposure and grow a fan base. It seems Minnesota has been paying attention judging by the size of the crowd that showed up for their performance at Mill City Nights November 7.

Although rival show The Voice claims to be designed around finding the best vocal talent, Petatonix competed and won on The Sing Off, arguably a tougher test considering it requires all of the music to be produced by voices only—no instruments. Tragically, the show has since been canceled, spurring the creation of an online petition signed by over 36,000 people so far requesting a fourth season.

Fans at Mill City Nights packed every corner of the venue trying to get the best view of this unique show. Aside from a small riser, the stage was completely empty and there wasn’t even a banner bearing the group’s name, leaving no distraction from the clear star of the show—the singing. The lead vocals sung by Scott Hoying, Kirstie Maldonado and Mitch Grassi are exceptional and worth hearing on their own. However, it’s the low end that seems to set this group apart with Avi Kaplan’s rich vocal bass and the mind blowing beat boxing of Kevin “K.O.” Olusola.

The set was respectable in length, a pleasant surprise since the bands only release is a six song EP titled PTX 1. Much of their material is comprised of clever and complex arrangements of popular material released by other artists. Some of the obvious crowd favorites that evening were Starship (Nicki Minaj), Somebody That I Used to Know (Goyte), Aha (Imogen Heap) and Psy’s Gangnam Style.

A nice opening set was provided by rising acoustic artist SJ, based out of Florida. Material he released in 2011 earned him a nomination on The Coffeehouse satellite radio as “Discovery of the Year.”