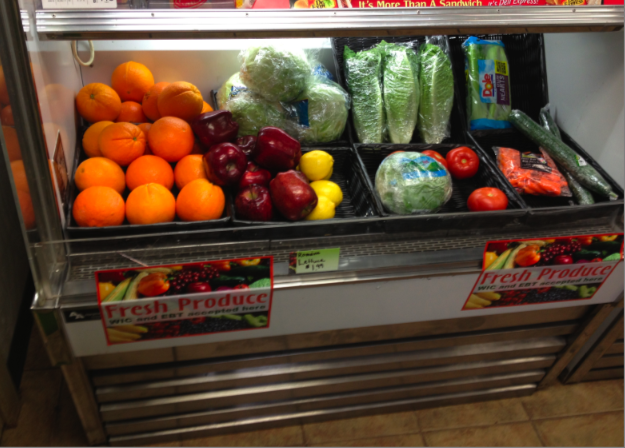 If you look closely between the two ‘No Trespassing’ signs on the outside of Penn Gas Stop, an improved addition is advertised on another sign — fresh produce. As a part of the Healthy Corner Store Project, the station located on the corner of Penn and 26th Avenue N. in Minneapois has just ramped up its supply of healthy “grab and go” options.

“We wanted to do this for a long time and I just think we needed a little push, “ said store manager Fouad Bazzine. “There was an incentive too, because most people ask for fruits and vegetables all the time anyway.”

Penn Gas Stop is one of more than a dozen corner stores in North Minneapolis taking part in the project, which kicked off January 4 at this location. The Minneapolis based Appetite for Change program, the City of Minneapolis Department of Health and Family Support and the West Broadway Business and Area Coalition teamed up to create the initiative, which encourages healthy eating in communities with minimal access to healthy foods.

“Now we have things that we haven’t had before. It’s like a store. So far the customers like it. They’ve never seen anything like it,” Bazzine added.

When he started working at Penn Gas Stop two years ago, there were no healthy options. Gradually the station added fruit, selling oranges, bananas and occasionally apples when shelf space was available. Now that the deli is open, Bazzine says the station orders less readymade sandwiches, opening up more space for produce.

Aside from oranges, apples and bananas, Penn Gas Stop now carries lettuce, carrots, tomatoes and other common veggies. On the launch date, the organizations backing the project visited the station, placing much bigger signs inside the store. Part of the Healthy Corner Store project includes an appealing makeover of the produce section or front counter. It is their hope that blending fruits and vegetables with other snacks will influence better decisions.

“It’s all about what people ask for,” Bazzine said.  “Sometimes they don’t see it, but once they start seeing [and taking advantage of it] they’ll come back for more.”