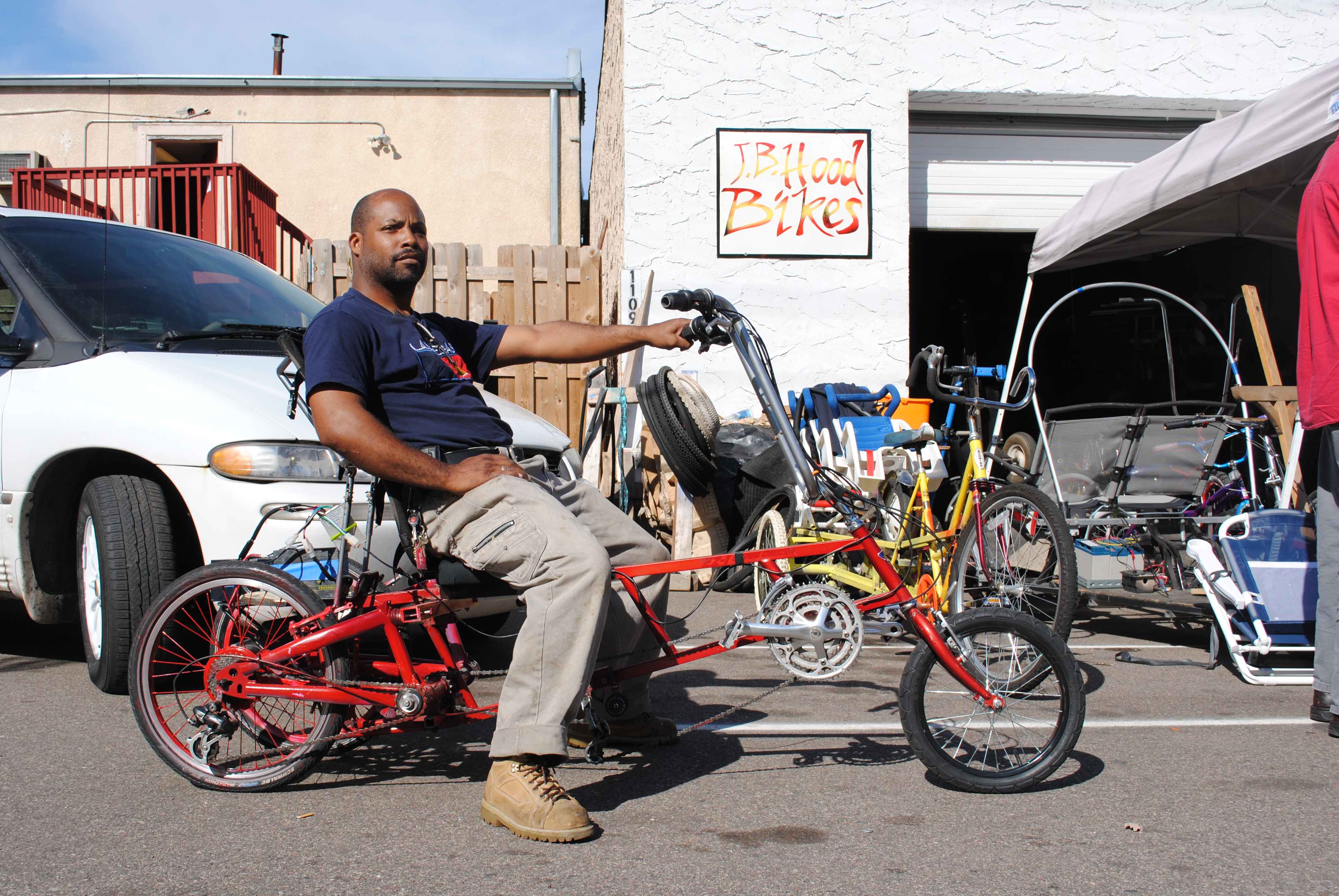 UPDATED 3/21/2012 (see below) — For 10 short months JB Hood Bikes, a small bike shop with big dreams, worked out of a garage on the south side of West Broadway, between Fremont and Emerson.  JB Hood was a for-profit bike shop; a part of 29 Facets LLC, the corporation started by founder Jon Nygren to oversee what was to be the first of many “facets,” JB Hood bike shop.  The shop became an informal community hub, taking on apprentices, doing custom jobs, teaching impromptu bike mechanic lessons, all while beginning to dream in so many directions about the future of a community-driven bike culture in North Minneapolis.

The shop closed at the end of December because of zoning violations with the city.  They were not allowed to operate on electric bikes without breaking city ordinances, they could not display bikes outside their garage in what is otherwise vacant parking lot space, and they couldn’t post a sign for their business without paying a fee and having the sign approved by the city.

While JB Hood lacks the power and political influence to challenge or work around these zoning laws (as many in the Vikings stadium camp are doing now), they were not lacking in unique vision.  From business practice to bikes, JB Hood was thinking outside the box, imagining strategies that focused on ownership and empowerment rather than charity.

While Jon founded the business, he aimed to take on a 49% owner who lived in the north side community the shop called home.  This dream was realized when Larry Winston came on as 49% partner investing only his labor and technical skills as a mechanic into the business.  This was to be the plan for each spin-off facet, which would focus on a specific aspect of bike manufacturing, repair, or other industry.  Community members could become owners investing only their hard work and knowledge, providing access to ownership and self-employment otherwise denied to many skilled people with few financial assets to call their own.  Jon wanted North Minneapolis to become a hub for an emerging biking industry.

It is unclear if JB Hood itself became financially profitable for its owners, but their model of ownership remains powerful.  It goes beyond the talk of “creating jobs” to creating opportunities for people to take back control over their own lives by directly engaging in their community.

Besides business structure there was the effort to do biking in a specifically north side fashion.  In their tiny garage, Jon, Larry, and others like supporter and intern Alicia Taylor worked to create unique bikes that responded to specific needs in the community.  One bike, a trike with an extended frame that supported three child seats, would allow carless caretakers to make it to doctors appointments, the grocery store, or other spots that would otherwise be cumbersome to access with crowded buses running on infrequent schedules.

While Jon cited an MPD stat that only 5% of NoMi residents have a driver’s liscence, he wondered why more folks weren’t biking.  While there is no definite answer to this question, for JB Hood, city bike planners, and other north side bike advocates the idea that biking and its associated businesses needed to become more responsive to the demonstrated needs of residents should be a no-brainer.

Without JB Hood only one bike shop now exists on the north side, the newly opened Venture North Bike Walk and Coffee, a bike/coffee shop selling new and used bikes, and running a variety of community programs.

Other community efforts like the Major Taylor Bicycling Club hope to form community partnerships that will improve biking access (and access to other healthy lifestyle choices) for communities of color.  They are present at health and wellness events across the city including Rondo Days in St. Paul and the Juneteenth Ride in North Minneapolis.  Members are participating in a national effort to organize African-American cycling organizations through the National Brotherhood of Cyclists (thenbc.org).  Other efforts both locally and nationally continue to focus on increasing access and equity in biking utilizing a community based approach.

Venture runs apprenticeship and earn-a-bike programs where youth can learn mechanical skills and come away with a bike of their own.  JB Hood had similar roles for local youth, but they were not as formalized.  No application process besides attending school and showing up in the afternoons ready to learn and work.  Both programs are useful and effective, but I wonder if the flexibility of JB Hood is powerful in a way that Venture’s program may not be able to realize.

Where else can a kid wander by, become intrigued, and right away start wrenching on a bike?  Will Venture have the organizational flexibility to offer “neighborhood adjusted pricing” to low-income residents as JB Hood did?  Will they hand someone wandering in with a broken brake cable a wrench and show this person how to fix their bike at no cost rather than ask a fee for labor that the person cannot afford?  I hope so.

The point for me, as a relative outsider to all this, is to look for truly community driven answers.  Change needs to happen within to be effective in the long-term.   This is not a claim that JB Hood was the “right” answer.  There is no such thing.  What they did provide, in their short tenure off of Broadway, was an interesting alternative, a dream for a community-driven bike industry in North Minneapolis.  A network of bike manufacturing, creative biking solutions, and everyday on the street engagement that would create lasting jobs and a bike culture that emerges from within.

While these biker’s dreams were certainly big, so are the underlying problems that destabilize communities like North Minneapolis.  Maybe these big dreams should be embraced?  If entrenched institutions like city zoning boards, churches, and granting agencies cannot change their ways then it will be up to creative residents, who may lack political and economic clout to put their support behind other alternatives.  JB Hood was a flash in the pan, but perhaps some of the ideas behind it have only just seen the light of day.

Note: The following paragraphs were published in the original version of this article.  In response to comments that put some of this information in doubt the decision was made to remove them from the body of the article.   The following distracted from the more important story about JB Hood bikes, but is being preserved below to maintain journalistic integrity.  Thanks, Aaron.

Venture is a non-profit group run by the Redeemer Center for Life, a church organization.  They formed part of a consortium of local organizations led by the Pohlad group, that may have bullied its way into a $350,000 federal grant that helped open the bike shop.

In an initial application process it seemed an application from Major Taylor Bicycle Club, an African-American led bicycling club, was the favorite.  In what is still a confusing sequence of events the panel awarding the grant was dissolved and a new panel was formed, without any application from Major Taylor, who were being pushed by the city to collaborate with the Pohlad group.  This new panel awarded the grant to the Redeemer group.

The Major Taylor plan would have seen a two-story bike shop/coffee shop at the corner of Lowry and Penn, selling new and used bikes and bike accessories.  The first floor would have contained the shop and the second the mechanics area and a spinning studio.  They had a deal lined up with local parts distributor QBP, and were working to build strong connections with local community leaders who would help determine how to make the shop an asset to the community.

Amid all this controversy, few would argue that a bike shop on the north side is a bad thing.  What is concerning is the process in which a church group historically focused on charity was chosen over a long-established, community-led biking organization who would possibly be more connected to what local biking needs really were.

I spoke with the current President of Major Taylor Bike Club, Louis Moore, about the process and he confirmed the confusion, dissolving of the first panel, and subsequent requests from the city for Major Taylor to join forces with the Pohlad group.  They were worried however, that a collaboration like that would ultimately mean people from Pohlad running the show, with little input from Major Taylor and the three other community partners they were working with (Cultural Wellness Center, Emerge, and NEON).   Forced into this corner, Major Taylor decided to let it go and focus their efforts elsewhere.