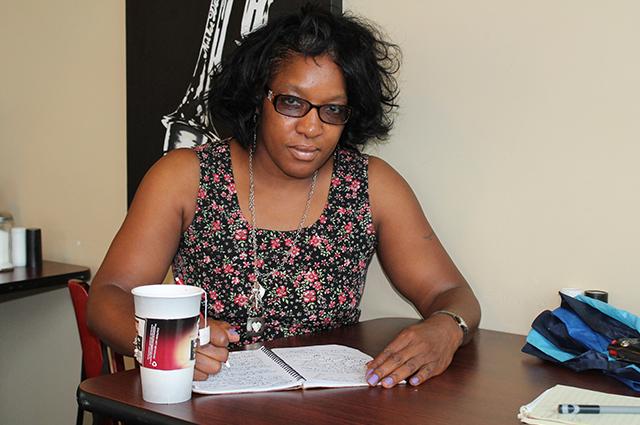 Sharon Brooks, founder and president of Peace of Hope, has increased services in north Minneapolis through her 2-year-old nonprofit organization. (MinnPost photo by Ibrahim Hirsi)

Sharon Brooks was only 12 years old when she thought of becoming an advocate for African-Americans with family members in prison.

Gradually the idea took shape as Brooks came of age watching her mother, Shirley, wrestle with the pain and frustration that came with the incarceration of Shirley’s brother. She also witnessed Shirley’s battle to seek fairness in the justice system, a lesson that would later become valuable to Brooks.

Later, when Brooks was herself a mother, her son was put behind bars. “He made some mistake. He committed a crime. He went to prison,” said Brooks, who was born in Chicago in the ‘60s and moved to Minnesota about two decades ago.

As her son served time, Brooks longed for assistance in coping with his imprisonment and understanding the way the prison system works. Brooks received none of that help, but like her relentless mother, she learned about the justice system — through trial and error.

Then came the year when Brooks’ childhood dream became a reality: In 2012, she founded Peace of Hope, a north Minneapolis-based nonprofit organization dedicated to serving Twin Cities families with members in prison.

“Peace of Hope started out of personal need,” said Brooks, president of the organization. “My son, cousins and some male friends were incarcerated — and a lot of times, I didn’t know what to do. I realized there are a lot of people like me who would use some help.”

Part of the organization’s mission is to provide affordable transportation to those who lack the means to visit their loved ones in prison.

Peace of Hope created an initiative that provides families with rides twice a month, thanks to local churches and organizations that lend vehicles used to go to 12 adult and juvenile jails in Minnesota. (There is an application process with the Minnesota Department of Corrections that takes about a month and a $20-$30 transportation fee that Peace of Hope charges riders to pay for gas).

Since it was established, Brooks said, Peace of Hope has served about 600 families in Minneapolis.

Anthony Tunstall, a local filmmaker and community advocate, has been the volunteer driver for Peace of Hope since it was founded two years ago.

“It feels good to help out in a way you normally wouldn’t help out,” Tunstall said. “Giving a ride to people isn’t that big of a deal. But it means so much to these people to get that ride and to go see their loved ones.”

Brooks said she believes that her transportation system could result in a positive relationship between offenders and their loved ones, a sentiment supported by research.

Research has found that inmates who receive regular, positive visits from immediate family members tend to do better in life after prison.

Here is what a 2011 study, “The effects of prison visitation on offenders recidivism,” concluded about Minnesota inmates:

Consistent with the results from prior research, the findings reported here suggest that prison visitation can significantly improve the transition offenders make from the institution to the community. Any visit reduced the risk of recidivism by 13 percent for felony reconvictions and 25 percent for technical violation revocations, which reflects the fact that visitation generally had a greater impact on revocations.

The findings further showed that more frequent and recent visits were associated with a decreased risk of recidivism. The results also suggest that the more sources of social support an offender has, the lower the risk of recidivism.

The results also showed that visits from siblings, in-laws, fathers, and clergy were the most beneficial in reducing the risk of recidivism, whereas visits from ex-spouses significantly increased the risk.

Brooks said that resources should be made available to families and former prisoners to help them cope with life after prison.

“The hardest thing that families could go though after receiving someone who has served time is to be able to deal with that new person,” she said. “That person experiences something dramatic and a lot of change.”

Peace of Hope was initially established to deal a recurring problem facing poor families with loved ones in prison: The hardship of traveling to prisons 90 minutes to four hours away from the Twin Cities.

In recent months, however, Brooks has intensified her organization’s community involvement. Peace of Hope now hosts regular events, which bring music and food to north Minneapolis streets. Motivational speakers are invited to the events, trying to prevent the youth from becoming involved in violent activities.

Brooks’ message to the youth: “Stop going to jail. Stop falling into the obvious trap. I think we’re smart people. And I don’t think we’re born inherently evil, or born to go to jail, or to kill or to get killed.”

Peace of Hope’s services include organizing informational forums about the justice system and teaching skills to deal with incarcerated persons.

Peace of Hope also provides support to individuals in courtrooms. “Courts can be very intimidating,” Brooks said. “We’re not lawyers. We don’t give legal advice. But we are a strong support team.”

Although Brooks says she would like to see her organization disappear and not be needed, criminal activities loom large in north Minneapolis, especially in recent months. Last weekend, separate shooting incidents killed two people and injured three others in the area.

“I can only imagine how those families must be feeling,” she said. “We need to re-evaluate where we stand.”

With Peace of Hope services increased and expanded, Brookes said she hopes to help bring down crime and other violent activities in the community.