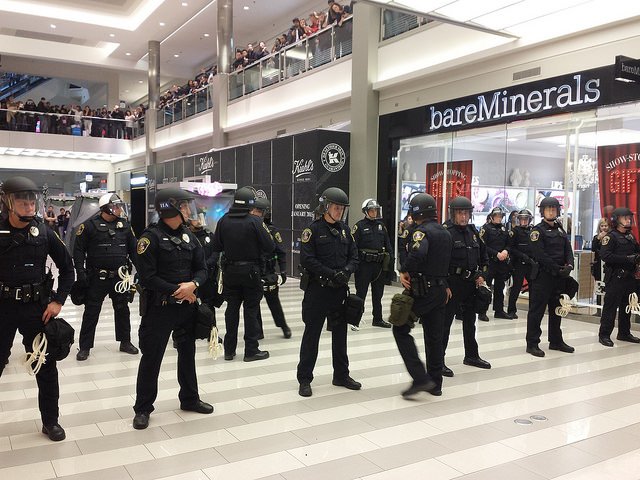 I thought law enforcement officials were supposed to be public servants. Like teachers, police and other law enforcement serve the citizens of a local area and are paid by taxpayer dollars. The latest threat to ten organizers of the December Black Lives Matter protest at the Mall of America, however, purports a different view. By charging these organizers with the cost of riot police and extra security ordered by the Mall of America, Bloomington City Attorney Sandra Johnson shifts our relationship with the police to extreme anarchist libertarianism, where citizens are individually charged for the “use” of these public servants, even when they didn’t request them.

Imagine if parents were sent a bill any time their child had to stay after school for detention, or needed extra attention from their teacher. The idea is absurd, of course. Teachers are paid with tax payer dollars. As citizens, we elect school board members who in turn hire a Superintendent, who lays out policies about how the school district spends resources.

Riot police shouldn’t have been called in for the protest at the Mall of America in the first place. The reason they were called was not to protect the shoppers from harm, but instead because the Mall of America is terrified that location might become an attractive option for other protests in the future. The excessive fines in this case are being used to deter future protests in the interest of a large corporation. It’s a case where the rights of a private entity take precedence over the rights of citizens to practice free speech, even if the local courts deep the mall to be private property.

But as citizens, we have powers too. In New York, the citizens elected a mayor who promised to reign in the discriminatory practices of the local police, such as Stop and Frisk. In Minneapolis, Mayor Betsy Hodges ran on a platform of racial equity. Her enthusiasm for policies such as body cams for police officers has caused its own kerfuffle which can be seen in such incidents as #pointergate.

If citizens don’t want unnecessary funds to be spent on draconian crackdowns of people speaking up against injustice, we must make our voices heard to the elected leaders who have the power to say how these funds are allocated.