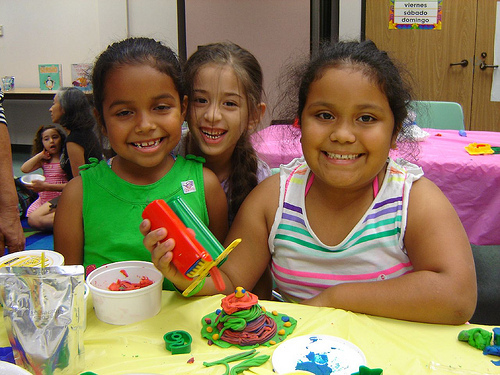 If preschool and child care are so important, why are they some of the worst-paid jobs you can have? Finally, political will has started to turn toward recognizing the value of early education, which is great. Copious amounts of research has shown that early child care and early education for children before they reach kindergarten benefits them not only during their time at school, but throughout their whole lives. But where are the proposals to pay the people who provide this crucial educational preparation?

“Child care (especially quality child care) isn’t all that profitable,” says Nicole Frethem, director of a National Association for the Education of Young Children-accredited child care center in St. Paul,  “Most teachers make $20k-$30k per year (if they’re lucky). Directors, a little more. People do it because they love it. But it is a challenging job and very under-appreciated for the importance of the work that these educators are doing.”

When a worker can make more money as a bank teller ($11.91 an hour average), as a janitor ($11.65 an hour average), in a restaurant, or in the service industry, that contributes to higher turnover and makes it difficult for childcare jobs to attract the highest talent.

Of course, most people in the early childhood care and education fields aren’t in it for the money. Valerie Borey is a Norwegian speaker with a master’s degree, trained to develop lessons and work in a hands on way with 3-5 year olds. Borey works in a Norwegian Immergian pre-K program with Concordia Language Villages, and says that while she’s not making what she would in a high level corporate position, her employer “does a good job of keeping me happy in various ways.”

“While I think that the people I work with and the families I work with place value on what I do, I also think it’s true that society in general seems to undervalue the role of preschool educators,” she said. “The work is actually quite challenging and intellectually stimulating, but the perception is that it’s all about wiping noses and nap time. Not at all! It’s about long-term and short-term planning, attention to developmental needs, social needs, emotional needs, cognitive needs, physical needs, etc., and can be quite foundational in regards to social interaction and lifelong attitudes toward learning.”

On the other end of the spectrum, a young woman named Allison, who asked that her last name not be used, worked at a nonprofit day care almost two years. She was making less than $8 an hour. “I would love a union for day care workers so we can make a living wage,” she said. “I feel a lot of my co-workers were burnt out and didn’t care.”

Allison worked in the baby room of the center, and there was one adult to four babies. There was supposed to be a teacher in the room, but every once in a while, the teacher wouldn’t be present, which her employer said was allowed in the state of Minnesota. “I thought it was weird but when they tell you, ‘Oh, it’s one adult to four kids and that’s the max,’ they make it sound like it doesn’t happen a lot, but it does.” She believes the workers and money and even the buildings are stretched thin. “It just got very stressful so I quit,” she said.

This week, DFL state senators introduced a bill that would allow child care workers to unionize, according to the Star Tribune. While support for the measure may be greater than in last year’s GOP-controlled legislature, it seems unlikely to pass in today’s anti-union climate.

Heather Amos, who works at A New Dimension Child Enrichment Center, said she is actually making less money in the child care field now than she was seven years ago. “It’s not just a physically demanding job but emotionally as well,” she said. “Obviously no one goes into this field to get rich, but I feel given the amount we are investing in the lives of these children, we should earn more.” Still, she has mixed feelings about unions. “A lot of it comes down to who is running the unions, but I feel childcare workers are underpaid for the amount of work we do.”