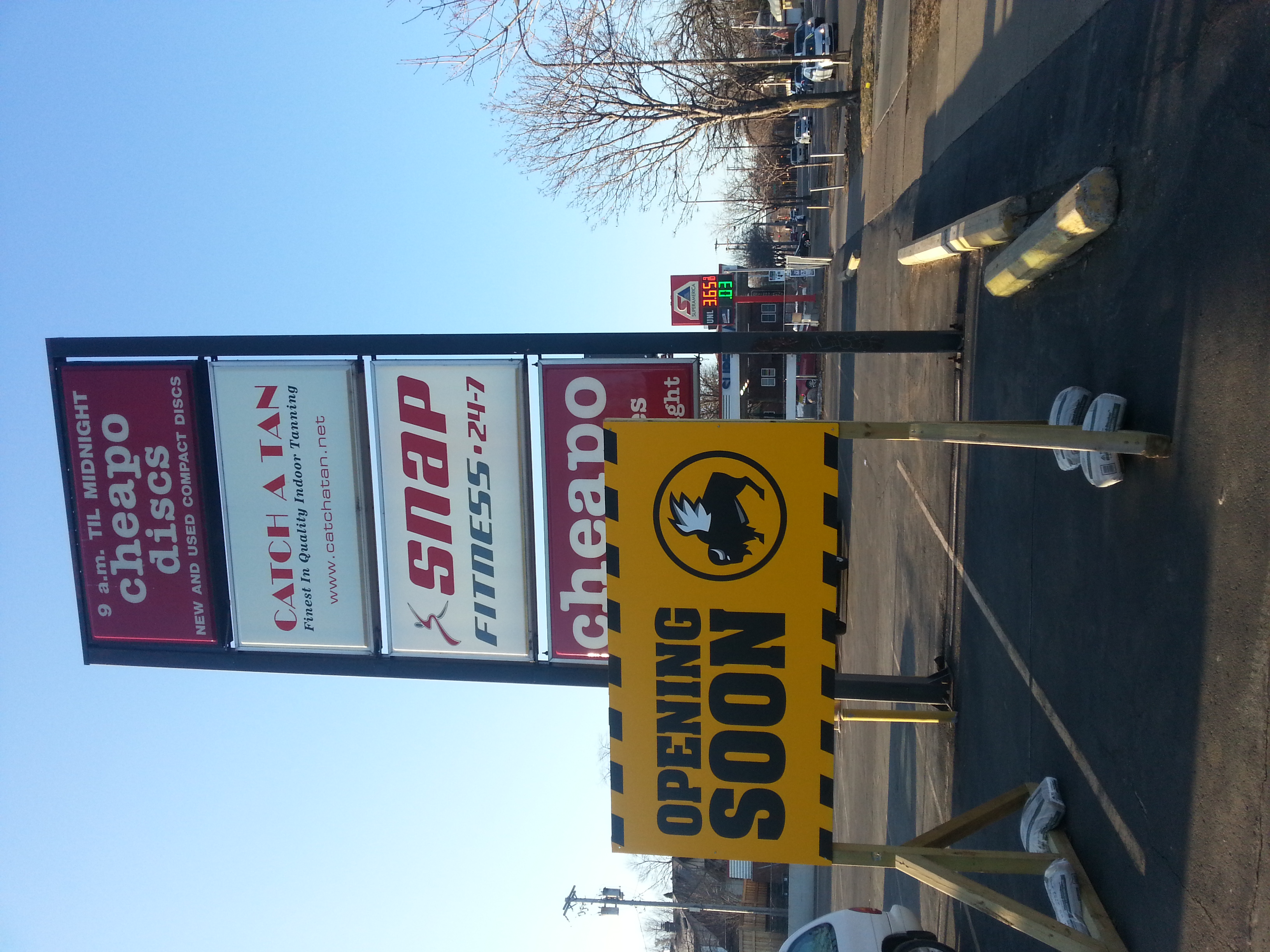 UPDATED 6/13/2013 (at bottom of article) | Will a Buffalo Wild Wings restaurant on Snelling cause problems of traffic, noise, and “student bacchanalia?” More than 30 opponents who packed the March 12 Union Park District Council Land Use Committee meeting raised these and other concerns. The restaurant has started construction at the former Cheapo Records storefront at 80 N. Snelling, having received city approval for the site plan and zoning last year. The liquor license application that was before the Land Use Committee is the last remaining hurdle to the planned May opening.

Heated discussion at the meeting followed Facebook debate at Citizens for A Better Snelling Avenue, a Facebook group created by Brian Quarstad on February 25.  Opponents and advocates of the chain have engaged in conversations on the pages of dueling Facebook groups that have been spirited and cutting at times, featuring personal attacks and controversy over the deletion of posts.

Buffalo Wild Wings (BWW) representatives at the meeting took questions and responded to proposals by members of Citizens for A Better Snelling Avenue to alleviate the impact of a development that they acknowledge is now inevitable.  Key measures included a fence along Ashland to discourage parking on that street, limiting the planned hours of operation (currently until 1 a.m. on weeknights), and furnishing the phone number of an on site manager to nearby residents — a longtime practice of nearby O’Gara’s.

The company made some concessions, agreeing to nix a sign facing Ashland, install a soundproofing system and bike racks, and limit smoking areas.  The company’s attorney stood firm on the vast majority of proposals, arguing that many were the jurisdiction of the landlord or the city.

The refusal of key proposals, especially the request for a phone number, rankled neighbors who fear the $1.6 billion corporation may be immune to community concerns.

“This is corporate,” said Colleen Beagan, emphatically waving a flyer in the direction of company representatives who hoped it would help de-mystify the large company.  “I don’t trust it.”  Beagan was one of the presenters for the Facebook group, and proved one of the most passionate and consistently vocal participants.  Her impassioned arguments were twice overruled by committee chair Anne White.

Quarstad created the Citizens for a Better Snelling Avenue group on February 25 to provide a clearinghouse for information and opinions on the new development.  The group features concerns about the site, and posts supportive of independent businesses and healthy food options.  In part, the page is a response to a development process that left many feeling they had been blindsided.

“I’m the most angry that the City let it happen,” said Beagan in an interview.  She echoed a common frustration that city officials failed to adequately inform people about the application for the site plan before it was approved.  Quarstad acknowledged that “we got involved late in the game.”

While many commenters have expressed thoughtful disagreement in respectful Facebook posts, some have not.  Beagan said constructive conversations were tainted by what she described as negative posts and “Facebook trolls.”  She said things got so bad that she gave up and left the group.

The posts she is talking about have been deleted.  In a post dated March 23, Quarstad announced, “This is a place for civil debate.  If you are not civil, you will be blocked.”  Only the responses remain, many addressed to Jake Ingebrigtson.  None of his posts remain on the page.

“I was hoping for great dialogue, but it went down the tubes pretty fast,” said Quarstad in an interview.  He said he only deleted posts that included personal attacks.

On March 25, Ingebrigtson created his own page, Citizens for a Snelling Avenue Buffalo Wild Wings.  If the title leaves any doubt at whom the page is aimed, six of the ten posts by Ingebrigtson have explicitly named the original page, criticizing it for being anti business and arguing that the new location is a boon for St. Paul’s economy.

In a March 25 post that has since been deleted, Quarstad sarcastically thanked Ingebrigtson for creating the page, including a link and labeling it “a place to vent.”  In a slew of posts that day he also denied accusations his group is anti-business and challenged his critics to name what action they are taking to improve their community.

My interview with Ingebrigtson took place over two distinct periods of time.  In our initial, 20-minute conversation, he said objections to BWW are “liberal hotty potty” that stem from “a typical liberal anti-business mindset” that he “struggled to find words to describe.”

“I’ve tried to articulate what to say about it without pissing them off, but I guess I just can’t,” he said, referring to supporters of the original page.  What was it in his posts that pissed people off?  “Nothing but the facts,” he says.  “That BWW is a profitable, reputable, and well run business, that St. Paul doesn’t have enough money, and that we need them.”

Ingebrigtson admitted he has yet to go to any meetings over the development, though he plans to start.  At this point a customer walked into his South Saint Paul used car dealership, and our conversation was postponed for a few hours.  When he called back, Ingebrigtson was still stridently supportive of the restaurant and bar, but his tone was strikingly different.

He argued that the neighbors should have fought this when the property was zoned or should never moved into their homes in the first place, comparing it to moving next to an airport and complaining about the noise. When I mentioned the property was zoned more than 25 years ago and long held a grocery store, he paused for a moment.  “If I owned a house right by it, it would probably bug me,” he said, “but I don’t see very many homes being affected by this.”  (Ingebrigtson does not live in the neighborhood.)

Ingebrigtson is especially keen to stress that he genuinely cares about St. Paul and is not out to troll on Facebook.  “Where I draw the line is where your requests affect the bottom line of a business.  I lean as far right as possible fiscally,” he said.  “I’m going to be the vocal pro business guy.  Money makes the world go round, and Saint Paul is not doing great right now.  Sorry it’s loud, sorry it’s next to you, but we are better off as a whole with them generating revenue.”

Does he think discussions on Facebook were or can be at all productive in bridging differences with opposing views?  “The issue here is that you are dealing with different philosophie,” he said. “You can’t mix one existing foundation with another, or maybe you could, but it would be really hard.”

Quarstad admits to being stressed out by the whole affair and said he dislikes the conflict intensely.  The danger with the internet, he said, is that real emotions and real people are behind it, and that these things can hurt.  “When people feel they are anonymous enough, even on Facebook, they aren’t looking me in the eye and telling me this,” he explained.  “If they could sit down with me and discuss this, we may not agree, but there probably wouldn’t be this hostility.”

“Absolutely 100%,” said Ingebritson when I ask if conversations people have online are different.  “It’s human nature, you have to be civil face to face.  On Facebook, it can be so hard to understand the context, and it’s a lot easier to speak your mind from behind a computer.”

That much, at least, is agreed on by everyone involved.

Going forward, Quarstad hopes that the Citizens for a Better Snelling Avenue can serve a purpose beyond Buffalo Wild Wings.  A number of large projects are slated for the neighborhood in the near future, and Quarstad hopes to maintain a forum for information and discussion of major upcoming projects such as the MNDOT transportation project.

People who want to get involved in issues like this should sign uphere for Early Notification System (ENS) to automatically receive notifications of decisions and hearings, said Noel Nix, aide to city councilmember Carter.

Or keep an eye out on Facebook — whatever the issues, discussion is sure to stay lively.

This week’s new development: the City Council voted June 12 to approve Buffalo Wild Wings’ application for a liquor license for their new restaurant at Ashland and Snelling. An email from council member Melvin Carter enumerated conditions that BWW agreed to: