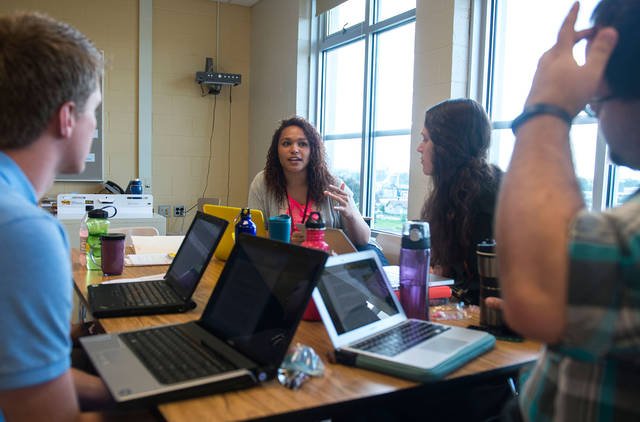 CEHD graduate student Clare Foley talks in a small group with other graduate students at Cityview elementary school in Minneapolis on June 24, 2014. (Photo by Chelsea Gortmaker)

At Cityview Elementary School in Minneapolis, University of Minnesota students with less than a month of instruction are assisting teachers as they begin their time in a new alternative teaching licensure program.

The program, a result of the partnership between the University’s College of Education and Human Development and Teach for America, is the first of its kind in the state.

Though the University graduate students will continue their teaching work this summer, the program is still on probation until the Minnesota Board of Teaching confirms it meets all standards for a teaching licensure program.

The University may recommend those who finish the program for a regular full-time teaching license after they complete a residency and two years of coursework and meet University and state standards.

Thirty-eight CEHD graduate students, who were also accepted as TFA corps members, began work earlier this month when the program was given a variance by the state teaching board to start work before it was approved.

But for now, the students will spend some of their summer in Minneapolis’ Northside Achievement Zone schools, assistant teaching while still earning credits at the University.

“I would recommend the comprehensive program because I think that affords you more scaffolding and a little bit less stress,” she said. “That said, I will say we’re making our alternative pathway program very strong.”

Jade Beauclair spends her nearly 10-hour days in the program rotating between assistant teaching, taking classes of her own and talking with her teaching mentors.

Because the program is focused on experience, Beauclair said, she feels she’ll be prepared to teach after the expedited residency.

“The [classwork] is definitely important, and I’m getting that every day,” she said, “but the best way to learn is just to do.”

Beauclair and fellow corps members have a good chance in Minnesota’s current job market because urban schools in the Twin Cities have a high turnover rate, she said.

TFA’s executive director in the Twin Cities, Crystal Brakke, said she’s confident that the program will be approved after the board has a chance to observe it.

The program falls under 2011 legislation that allows for a different pathway to teaching licensure, Brakke said.

But skepticism about the nonprofit organization has lingered in the Twin Cities for years. Some don’t see an intensive training program followed by a two-year temporary teaching job as the best approach to licensure.

When the University announced it was considering a TFA partnership, CEHD graduate students formed a petition opposing the idea.

The petition — which had more than 200 signatures last June and now has about 300 — states that there was a “lack of support” for the partnership from some faculty members.

But Dillon said there hasn’t been any backlash about the new program since it started and people are beginning to embrace the idea.

The University plans to partner with Minneapolis Public Schools to create a similar program, Dillon said, using the same structure.

The program will allow MPS’ teaching assistants and other staff without a teaching license a chance to earn one while still working, she said.