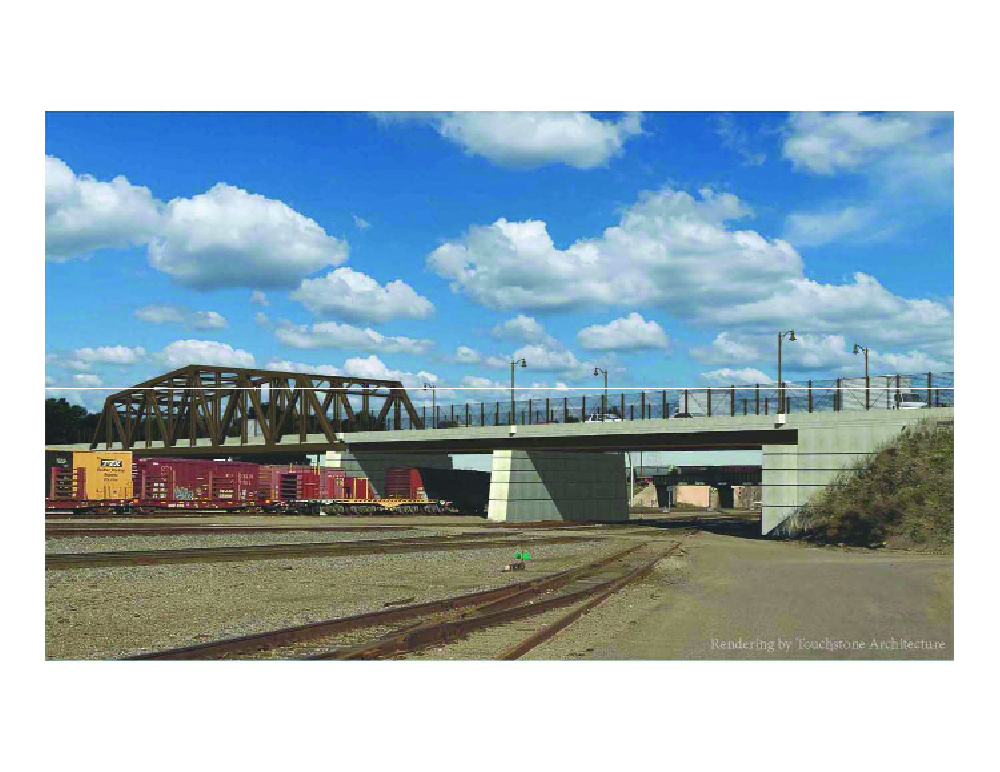 Thanks to drivers of big vehicles who ignored the three-ton load limit signs, the St. Anthony Parkway Bridge over the Burlington Northern Santa Fe Northtown yard, a bridge which is due to be replaced next year, is now closed to traffic.

At the May 22 meeting to unveil the final new design, detour information and plans for the historical plaza, attendees noted that though the city, as a result of recent inspections, had put a three-ton load limit on the bridge, they had seen vehicles weighing more than three tons still using the structure. Therefore, the City of Minneapolis has decided to close the bridge to all traffic until further notice.

According to a city news release, the closure affects all motor vehicle, bicycle and pedestrian traffic. However, depending on the results of further analysis, the bridge may reopen to pedestrians and bicycles in the coming weeks.

The 89-year-old truss bridge carries an average of around 4,200 vehicles a day over two dozen tracks of the Burlington Northern Santa Fe rail yard. While the replacement project has been in the works since 2008 with some false starts, city engineer Jack Yuzna noted that for the neighbors, it’s been an even longer process than that, “back to the late 80s.”

Graphics of the new bridge have a single, larger span that looks a lot like one of the old ones, flanked by a steel beam approach span on either side. There are two piers in the rail yard (fewer than current) and new bridge abutments on either side.

Kristin Petersen of SEH showed a fascinating animation (a few times), of how the construction will proceed. “The majority of the superstructure will be built offsite because we won’t have access to the yard,” she said. A steel structure that will eventually be part of the bridge will be shifted from side to side where needed as a “launching girder” to permit the old truss spans to roll out and the new to roll in. They plan to have a time lapse camera recording the real thing.

The real time process will be a lot slower than one might think. Utility companies have to come in and move their stuff. A contractor should be identified by late this summer with construction starting in late April or May. “They’ll be at it a year, in late summer 2016 they’ll be done,” Yuzna said.

Detouring traffic, especially trucks will be “a bigger deal because of other restrictions in the area. Every way out of there is load-posted or clearance-posted. We’re checking with MNDoT,” he said on May 22 when they had not yet talked to local police about enforcing the load limit. Late Friday, May 30, the city issued a press release about the closure. Traffic ends up going south on University to Lowry, to Marshall.

California Street will be relocated slightly, and the land under the original street will support an overlook and interpretive plaza, part of the mitigation process. It’s an exchange for removing a historic structure, a last remaining example of the Warren Truss system.

An extensive historical report will be posted on the website, www.stapbridge.com, soon, joining the maps and graphics copied in this article. 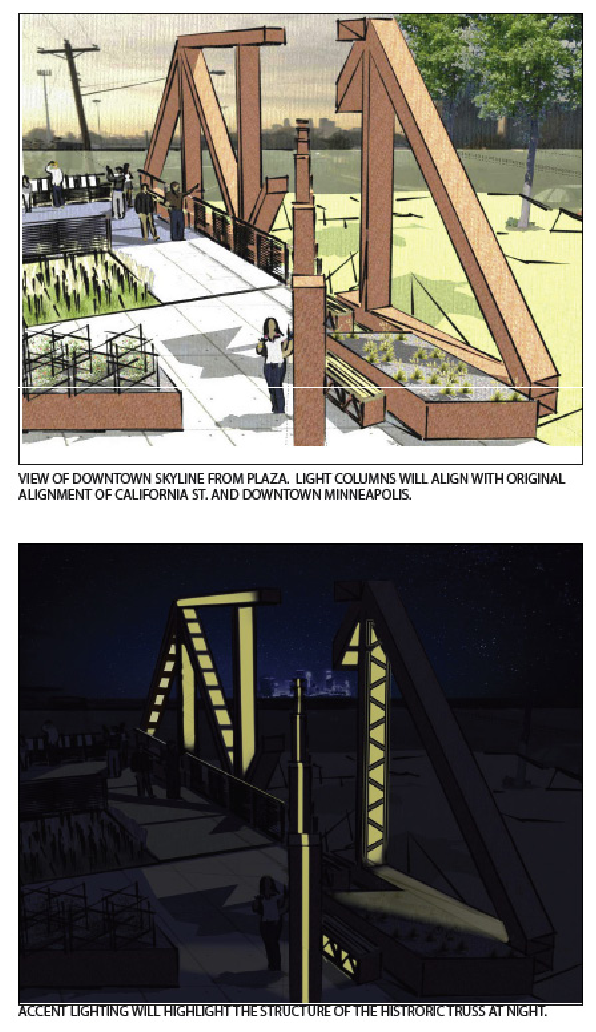 One of the old trusses, split, lit at night, will be used on an interpretive plaza that gives a view of downtown and the rail yard. The plaza railings will be lined with informational panels. An overview of the overlook is below. (Graphics by Bob Close Studio) 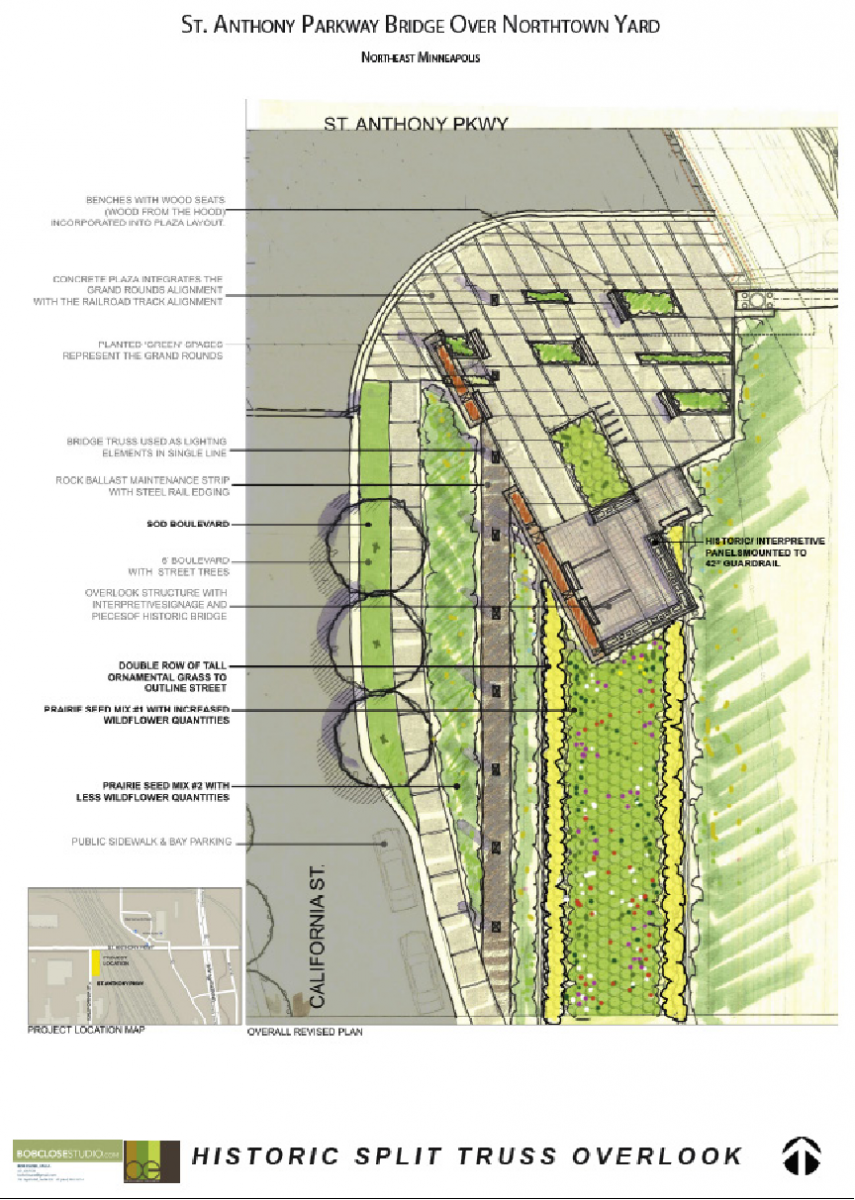