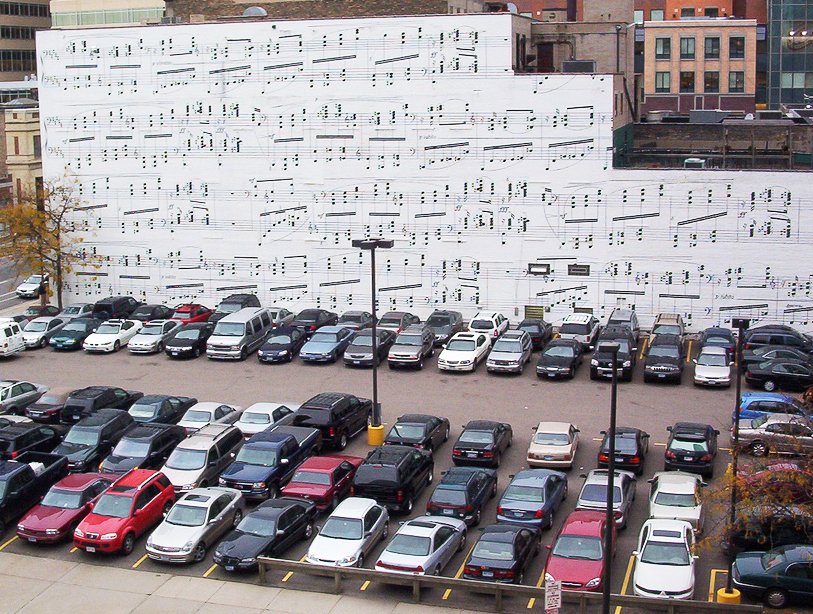 Parking. Parking. Parking. No matter what we’re talking about in the Twin Cities, it seems like we’re talking about parking. Debates about the future of Selby and Snelling are pivoting around the question of parking: when the new customers and residents come, where will all their cars go? Jeremy Iggers told me once that the single most important factor affecting the success of a restaurant in the Twin Cities is the availability of parking. My neighbor is helping to open a new restaurant, and sure enough, they’re worried about parking: how many spaces will the Dumpster take? Will 17 spaces be enough? What if there’s not enough parking?

It can be more than a little tiresome to return, again and again, to the question of what’s to be done with all our cars when we’re not using them. I was bike-only for a year, which made me even more impatient about Minnesotans’ perpetual obsession with cars and parking. Is it really that big a deal?

Well, right now, it is. Today I planned to have a meeting here at Café Bene on Cleveland and Grand, followed by a lunch at the adjoining Davanni’s. The establishments now impose an hour limit on their parking lot during lunch rushes, though, which meant that for a planned two-hour stay, I had to drive out past the permit-only zone necessitated by the University of St. Thomas. Ultimately, I had a half-mile walk from my spot on Sargent to the coffee shop. Will I be planning a coffee/lunch stop here again? Not likely.

I can’t complain about the parking lot time limit—or the parking restrictions. It’s smart urban planning: there’s obviously enough foot traffic here from St. Thomas and neighbors that car-driving Minneapolitans like me should be redirected to less-dense areas. While I walked the several blocks, though, I reflected on how I’d just assumed that parking would readily be available. I think a lot of Twin Cities residents tend to make that assumption, which is why restaurant proprietors are so frantic to make that assumption correct.

Eventually, of course, it won’t be: our driving culture is unsustainable for a number of reasons, and in the long term we’ll have to develop an infrastructure that will make driving a luxury rather than a necessity. (Despite the recent relative explosion of biking, the vast majority of trips in the Twin Cities are still made by car—at significantly greater per-trip public subsidy than light rail transit.) In the meantime, though, we’re in for a painful couple of generations of transition.

What will a denser, reduced-car Twin Cities look and feel like? It’s hard to imagine. The reason I’m in St. Paul right now is that I work for the Twin Cities Daily Planet, a publication seeking to serve neighborhoods across the Twin Cities. Do the “Twin Cities” as a unit even make sense without cars? Getting from Wakefield Lake in North St. Paul to the Minikahda Club in South Minneapolis is not only a cultural and economic leap but a geographic one, taking (per Google Maps) 30 minutes by car, 100 minutes by bike, 132 minutes by bus, and 328 minutes by foot. That’s without leaving the city limits—just imagine how those differentials translate to, say, a Hugo-Eagan commute.

Of course, enhancing sustainable transportation infrastructure will mean reducing that differential: when it takes longer to bus 17 miles than it does to bike them, that says something about the clunkiness of our public transit system. (It also, in fairness, speaks to our excellent system of bike paths.) Moving away from cars will naturally increase the amount of time we spend in our own neighborhoods, but it might also create surprising connections among neighborhoods. There are a lot of things it’s far too soon to know, but one thing’s for sure: we’ll finally be able to spend less time talking about parking, parking, parking.