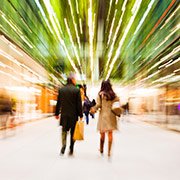 For most Minnesotans, a trip to the mall means getting in the car, driving through traffic, and navigating a crowded parking lot before even stepping into a store. But for residents who are moving into the new luxury apartments at One Southdale Place, a mall is just a short walk across the parking lot. These structures promote high-density, pedestrian friendly cities that strengthen community development.

Its no secret that American cities, including Minnesotan ones, were designed with car traffic in mind. Strong highway development provides access to the suburbs, but urban sprawl has repeatedly shown to hamper economic development. Southdale Place joins other developments in Eagan and Maple Grove as part of a growing effort to densify the sprawled suburbs of the Twin Cities metro area.

Historically, malls represent the auto-centric thinking of city planning: huge consolidated shopping areas with a sea of parked cars. Building homes near these centers can reinvent what these spaces mean. High-density cities reduce dependence on automobiles and oil consumption, according to Edward Goetz, professor at the Humphrey School of Public Affairs. They feature walkable areas that not only reduce car congestion, but increase feelings of community. Southdale Place is unique because of the way it incorporates mixed-use developments to increase density. Previously, property at Southdale was devoted to commercial use. Building residential units in these spaces is part of a growing trend to “retrofit” suburbs, says Goetz. Suburbs like Edina already have strong infrastructures, which makes densifying difficult. Re-using space, such as the Southdale Shopping Center parking lot, is one of the best strategies to grow communities without sprawl.

These apartment leases aren’t cheap—monthly rents begin at $1,345. According to Goetz, it was a missed opportunity to not include a few units of affordable housing. As city planners seek to retrofit suburbs, they should also be paying attention to diversifying housing stock in terms of affordability.

As cities and suburbs run out of empty developable land, any future growth will have to mean denser growth. Developments like Southdale Place demonstrate the potential of commercial areas to support residential housing. New apartment residents may have views of the parking lot, but they are also becoming part of a denser, stronger, and pedestrian-friendly city.