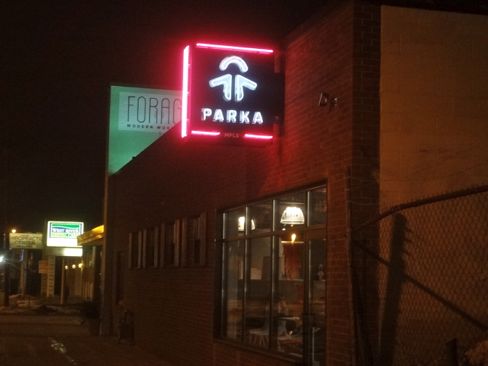 Tracing the genealogies of the local restaurant scene is a bit like sleuthing the vectors of STD transmissions: Chef A worked in the kitchen at restaurant B with sous chef C, who transmitted his technique of making dish D to chef E, who showed up six months later at restaurant F with a variant strain of that dish, which sous-chef G spread to cafe H…etc. etc.

At any rate, this interconnectedness of everything in the culinary universe struck me recently when I dined at three different restaurants: Parka, the Sample Room, and Borough (which I wrote about recently), and realized the web of connections among them.

Parka is the latest venture from chef Erick Harcey, owner of Victory 44 in north Minneapolis. A couple of years ago, several members of Harcey’s kitchen crew decamped and opened their own restaurant, the now semi-legendary Travail in Robbinsdale. Two former members of the Travail crew, Nick O’Leary and Tyler Shipton, are the founding chefs at Borough, while another, Geoff Hausmann, is now the chef at the Sample Room. (Dara Moskowitz Grumdahl reports that he has exciting plans for his new venue.)

The three restaurants are very different—there is a hipster playfulness to Parka, Borough is a bit more formal and sophisticated (but only a bit), and the Sample Room carefully balances culinary ambition with the welcoming aesthetics of a neighborhood tavern. But all three combine serious cooking with a lack of pretentiousness.

The playfulness of Parka comes across in its menu, and also its menu prose (“WE ARE HERE TO FOSTER A PLAYFULLY MODERN ATMOSPHERE OF HAPPY SATISFACTION AND ENJOYMENT THROUGH COFFEE, FOOD, AND DRINK.”) Parka doubles as a coffee house and bakery, with breads and pastries supplied by Rustica, and coffee from the Dogwood Coffee Co. 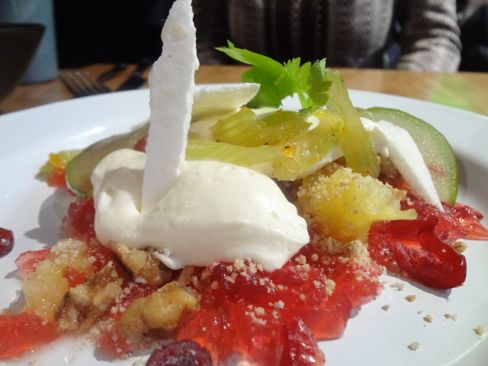 Menu highlights include a cranberry Jell-o salad (made with agar, not gelatin, $8), ham pickle tots (made with cream cheez whiz, truffles, pickes and chives, $9), goulash with tomatoes, corn and macaroni ($11);  and spare ribs glazed with root beer ($13).

Part of the playfulness comes in the presentation. The chicken and wild rice soup ($8) is poured at tableside from a chicken-shaped pitcher into a tilted glass fishbowl. Mom’s meatloaf sandwich comes with a mini fryer basket brimming with fries. The cranberry Jell-o salad, laced with chevre, pecans, apple, celery and pineapple looks like an abstract expressionist landscape. 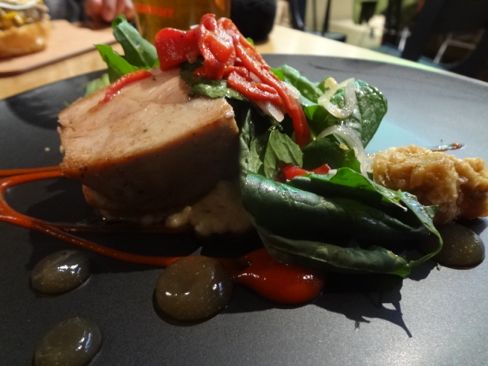 I’m not exactly sure how the beer can chicken ($13) was prepared—traditionally, it’s a whole roasted chicken impaled on an open can of beer, but this was a thick pressed square of deboned bird, as moist and tender as any chicken I have ever tasted. The meatloaf sandwich ($14) also won raves, as did the very light and delicate fish fry ($11).

It has been a couple of weeks since my visit to the Sample Room, so the details have faded from memory (and the menu has changed substantially), but what I remember is a starter of rustic and flavorful homemade Italian sausage with lentils ($7), a lively pappardelle putanesca with tomato, capers, olives and Parmesan ($9/$16); friendly service and a smart list of local beers on tap. 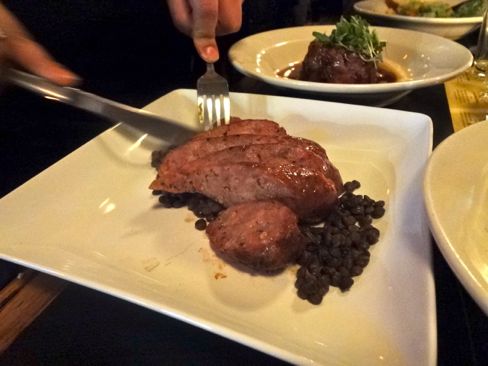 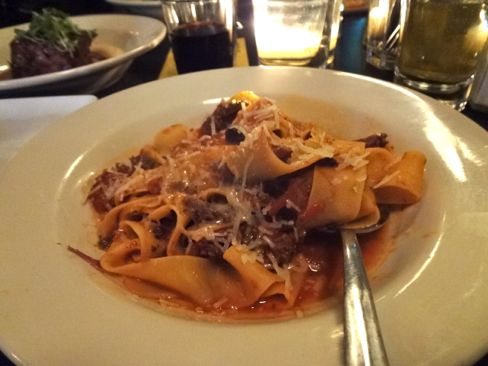