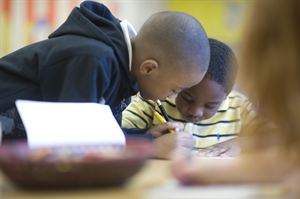 Cadara is one of 50 kindergarten students enrolled at Pierre Bottineau French Immersion school, which opened its doors in North Minneapolis this September. Her mother, Catina Patterson, heard about Bottineau at a kindergarten information session, and then attended monthly family and cultural events that the school hosted during the seven months before it officially opened.

“I chose to enroll her knowing that this was a newer school,” Patterson said. “A lot of people were not as interested and still don’t understand immersion schools, but I’m glad that my daughter could be a part of something so great to start.”

She liked the idea that Cadara would be learning a second language. After dealing with an overcrowded preschool, she also like the smaller class sizes.  “I like that everybody involved in the school speaks French, down to the secretary,” Patterson said. “They’re excited to teach our children and they try to be as consistent as they can be for a small-staffed school.”

The students at PBFI, two-thirds African-American and students of color, come from households where parents expect a straightforward quality education. A few students come from families with francophone backgrounds in places such as Togo or Canada. The school’s organizers hit the pavement throughout the spring and summer. The school has 50 kindergartners and 50 students in first through third grades combined. The plan calls for expanding to fourth grade next year, and fifth grade in the following year.

Bottineau is located in North Minneapolis, in the Jordan Park School, where it shares space with the Hmong international Academy. Though class lines often pass in the hallways, the two schools operate separately.

Volunteers for PBFI were at every Northside festival this summer, painting Mardi Gras masks on children in hopes to spark parent interest. School leader Christina Maynor explained, “It’s meant knowing my neighbors, going to meetings and finding out what’s going on in the Northside. We ask parents what their expectations are and we listen to them. The governing board has an intensive plan in place to connect with families and it’s working.”

A French learner since the age of eight, Maynor taught French at Patrick Henry High School for 10 years prior to taking on the head position at PBFI. “With my degree in French I knew I wanted to teach in MPS and in a setting of diversity,” said Maynor. “It’s possible for kids who come from all different backgrounds to learn a lot and get a lot out of a second language.”

Maynor was one of the proposal writers for the new school. PBFI is a Minneapolis Public School district school, but it’s a “site-governed school,” a new model developed collaboratively by the district administration and the Minneapolis Federation of Teachers.  It’s the first site-governed school opened since the legislature passed a law to authorize this kind of school in 2009. (See Pierre Bottineau French Immersion School plans to bring “je ne sais quoi” to North Minneapolis for more background on the development of site-governed schools.)

“My passion behind coming to the Pierre Bottineau project was to be sure that at this school every kid that comes to us gets an excellent education,” said Maynor, “and that we intentionally seek out, partner and connect with students who might not be thinking about French immersion but for whom this could really make a difference in their educational career and their opportunities later on. “

She said one of the tasks is to strengthen the community’s faith in the program. “We have to show them how French immersion is [effective] and isn’t as foreign as they think it is. It’s the official language spoken in 40 countries around the world and it’s the second-most spoken language after English.”

“It’s a very unique experience for the children to hear French all day, especially at a young age,” said Tyler Salkey, office specialist at MPS Office of New Schools. Early last week when the Daily Planet dropped by to tour the school, he was volunteering for the second time. “The teachers are very hands on and even when the students don’t understand what they’re saying, by action they see what the teachers want them to do.”

Those helping out at PBFI who aren’t seasoned francophone faculty are advised to speak as little English as possible, preferably not at all. Here, actions, definitely speak louder than words.

All parents are expected to read with their children for at least 20 minutes daily, as well as helping with homework. With kindergarteners and first graders, math homework comes in English. “That way when they’re doing it at home with their parents — in their brains, they’re creating hooks for both languages,” Maynor added.

Picking up and dropping off her daughter at school every day Patterson has noticed a change. “One thing that does surprise me is the amount of respect that she gives to adults there which means — to me as a parent — they’re showing her that they care. She’s not easily drawn in by adults, but she doesn’t show any apprehension with them,” Patterson said.

Though the specifics haven’t been worked out yet, Maynor says PBFI is looking to partner with the Alliance Française de Minneapolis to offer French classes to parents. Patterson says she will definitely take that opportunity.