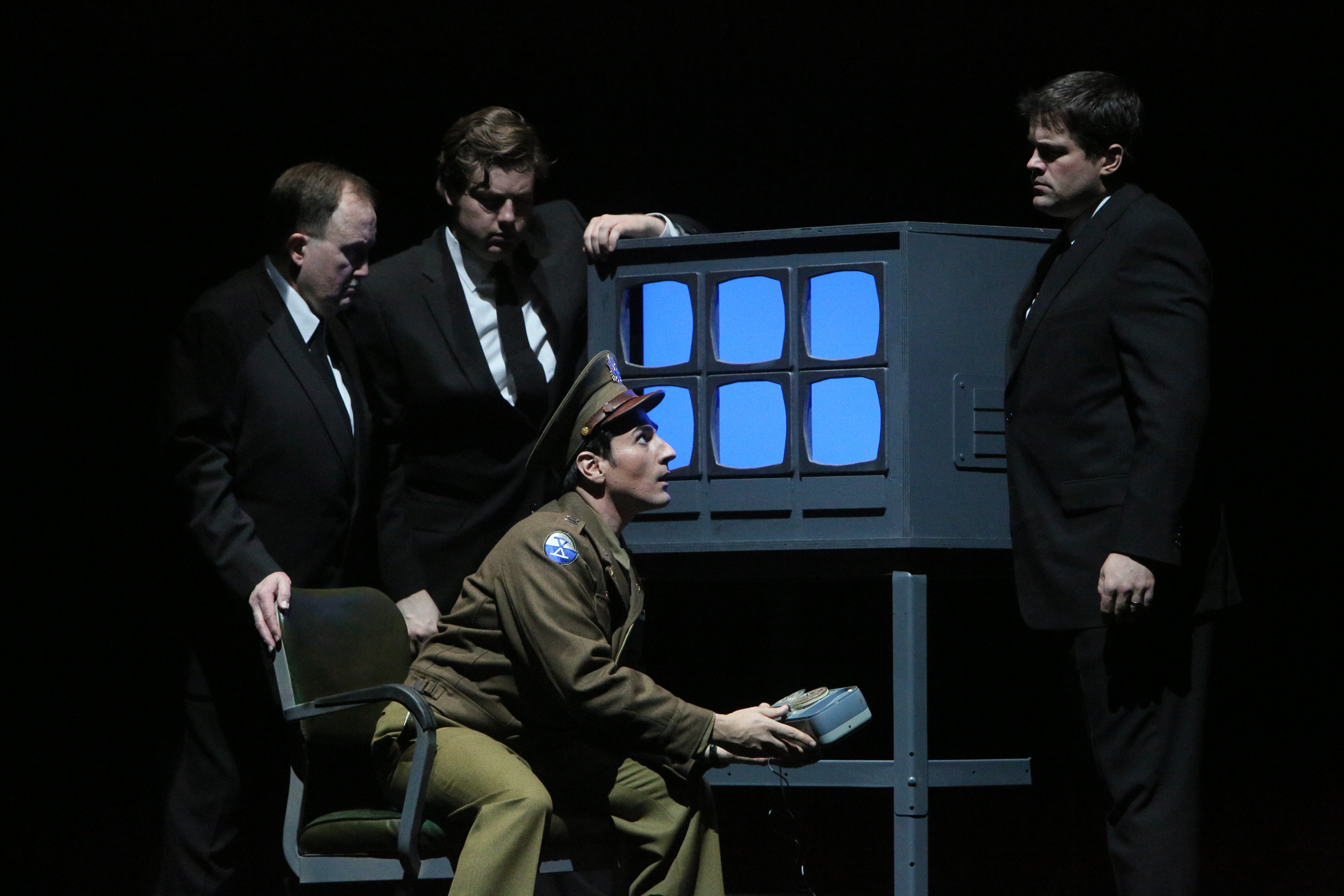 Leonardo Capalbo as Captain Ben Marco and Company in the Minnesota Opera production of The Manchurian Candidate, directed by Kevin Newbury. Photo by Michal Daniel.

The world premiere performance of the opera The Manchurian Candidate takes place this Saturday at the Ordway Center for the Performing Arts’s Music Theater. This new opera by Mark Campbell and Kevin Puts was commissioned by Minnesota Opera as part of the company’s New Works Initiative, and adapts the bestselling 1959 thriller novel by Richard Condon. The Daily Planet sat down with The Manchurian Candidate’s stage director Kevin Newbury to discuss the opera.

When were you first engaged to direct The Manchurian Candidate?

I know Mark Campbell and Kevin Puts fairly well, so as soon as I heard about it I started angling for the job. I have a long relationship with Minnesota Opera, so I read the first draft of the libretto and called Dale [Johnson] and said, “I really would love to do this,” and everything worked out. I was involved very early on – I could attend all the workshops, be part of the writing process, and really be involved from the beginning.

Is getting hooked up with productions that you hear about through the grapevine a normal process for you?

It happens in many ways – sometimes companies call me up and you’re involved at the genesis of it, sometimes I come in after the piece is already written…which is not what I prefer to do. I prefer to be involved from early on. In general, I’d get a call from the company saying, “Would you like to do this?” With The Manchurian Candidate, it just happened that I knew Mark Campbell and immediately threw my name into the ring.

How does being involved early shape your involvement with a piece? Do you give creative input while working through drafts?

It’s great to think about everything through the entire process, including the whole theatrical structure, transition music, how things play out and develop. I don’t do any writing – I certainly don’t put any musical notes to paper – but I’m very involved in the forming of the structure… I’m very involved, ask a lot of questions, and try and be the sounding board.

My role as the director is [in part] to hear ideas and say when I know that they’re good.

What makes you excited about this particular piece?

It’s an incredible piece of theater. Mark and Kevin write very theatrical music and libretti, and so it has a real sense of suspense. It’s like watching a thriller on stage…it certainly doesn’t sound like movie music – it’s [definitely] an opera – but very cinematic. There are lots of scenes [and] a lot of exciting transitions. It’s [also] a multimedia production with a lot of video and a very fluid theatricality.

Mark and Kevin are really writers of the theater, first and foremost; I think it’s a very strong and exciting piece of musical theater. It’s very tightly constructed and has a lot of momentum and suspense to it…and it’s never boring, not even for one moment!

This is my first time working with Kevin, although I’ve known his work. Mark and I have worked together on a couple of things before; we’ve been friends for seven or eight years, so we’re always looking for chances to work together again.

How did you and Mark Campbell first meet?

We met at a holiday party, actually, and immediately started hanging out and became friends. We started collaborating on things [soon after].

I’ve read the novel and seen both films – the first one a couple of times. I engage with them, I watch them, and use them as a springboard – and then I ignore them. You want to be inspired by them, but not be distracted by them.

When you approach your directing, you have the rooted artifact of the score and the music. In this opera, there’re many scenes where the music comments on the text being delivered, but there’s a tremendous variety in how the score does so. How do you make sense of that?  If you told the average viewer, “This scene comments on the action using micropolyphony,” even your average operagoer might say, “Huh, what?”

That’s why these workshops are so helpful. A MIDI file or demo recording is not the same as hearing the music live and in person.

One of the things about the workshops, especially the orchestral workshop, is that you always know exactly what scene you’re in musically. It never sounds like you’re in another scene – it all makes up a whole, but they’re very unique, and that makes Kevin unique as a composer. I learn so much from being at these workshops; being at the piano-vocal and orchestral workshops helps you make sense of it all. Then you have those recordings to refer to… Minnesota Opera’s very unique in that way, in letting you hear the orchestration in advance. It really lets you do a lot.

What pathway led you to direct opera?

When I graduated from college, I wanted to be a theatre director, so I moved to New York. The first job I got was in the artistic office at New York City Opera, back when they were doing 120 performances per year of 15-20 operas. That was a great crash course; I started assisting other directors, and then moved up to directing operas… I do about 80% opera these days, but also do some theatre and film as well.

Some of the conventions [of opera] are different, but they all inform each other. I think that every time I do a film, it makes me a better opera director and vice versa. It’s all about good storytelling.

Tell me about your direction with the character Eleanor Iselin.

The actress playing her [Brenda Harris] is amazing. The key with Eleanor is to not tip her hat too early – to keep the people who don’t know the story well in suspense.

The love story has some very beautiful music, which could be a big distraction on its own. How do you approach this as the director?

We have to care about these characters. Caring about them and their lives makes the threats and fears so much more poignant. I think one of the things that Mark and Kevin have done so well is to vacillate between the political and the personal. If it was all political or all suspense – all Hitchcock, as it were – it wouldn’t be nearly as interesting because you wouldn’t care about the characters. When they arrive at the romantic music, they’ve really earned it and it’s especially pleasant as a break from the political storyline.

Dale Johnson has said that this is a story that he’s wanted to do for a long time. What was your initial reaction when you heard about this opera?

Oh, I thought it was a brilliant idea. Even though it’s set in the late 50s, it has all this fear and paranoia and their use in politics in everyday life. Those are such common themes today as well, I immediately wanted to be part of it.

This is a very period piece, set during the Eisenhower and McCarthy years, but the fear of the other and the persecution of the other, trying to defeat the other country…you don’t have to go very far today [to find parallels]. With the NSA and surveillance, and people accusing each other of communism…we don’t have to look far.

We’re telling this story in its actual period, and letting the resonances come through on the own. In some ways, it helps us to look at things today in a more indirect way; the resonance can be more provocative if you don’t set in 2014 with cell phones.

For audiences who are on the fence about seeing an opera, what would you tell them about why they should see The Manchurian Candidate?

It’s an exciting piece of theatre. It’s a great story, it’s tightly constructed, it’s a short, exciting evening with great singing actors. It’s really more like going to see a film or Broadway show than a normal opera. If you’ve never been to the opera before, this would make an ideal first opera – it’s in English, and it has really direct storytelling. It’s also really innovative and pushes the art form forward.