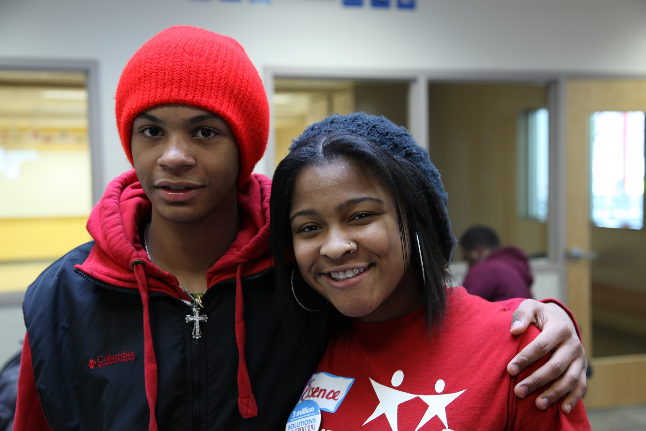 A frustrated teacher at the helm of an unruly classroom– students shouting, texting and throwing paper airplanes. Although this type of ‘disruptive behavior’ may be a reality for many teachers on a daily basis, this particular scenario was part of a role play exercise performed by students at a recent Solutions Not Suspensions event in North Minneapolis, aimed at getting Minneapolis students involved in school discipline practices.

The goal of this role play was to illustrate how inappropriate behavior might be labeled for students unfamiliar with terms such as ‘insubordination’ and ‘disruptive behavior.’ “It was really shocking for me to see, said Ivy Thomas, a freshman at Harding High School, “because I’ve seen everything that they showed up there, I just didn’t know technical terms. … Most of the terms that they were touching base on I really didn’t know, like ‘insubordination.’ I didn’t know what that was.” The role play included students working in small groups to act out “assault,” “harassment,” “extortion,” “disruptive behavior,” and four other terms used to label inappropriate behavior in the Minneapolis Public Schools Code of Conduct.

“I think a lot of times in school they actually mislabel what actually happens. But because kids don’t know the terms and what the vocabulary means, they just kind of get penalized for certain things that they probably shouldn’t have,” said Essence Blakemore, a 14-year-old student who is a member of the leadership council of the Minnesota Youth Council and a member of the Board of Directors for the Minnesota Alliance with Youth.

The February 12 event, titled “Solutions in Action” was held at the North YMCA, and focused on promoting youth empowerment and brainstorming ways to strengthen the communication about discipline issues between youth and staff in schools.

Representatives from several Twin Cities organizations were on hand to connect and engage with students about resources available to them through their organizations. Some of these included the Minneapolis Youth Congress, The Legal Rights Center, Juvenile Detention Alternatives Initiative and Minnesota Alliance with Youth.

Activities throughout the day were designed to teach students how to advocate for themselves and get more involved with their school administration. Youth leaders from the Boston Student Advisory Council (BSAC) spoke about their organization’s work during the past ten years with policy reform and educating students in Boston Public Schools about of their rights and responsibilities under district rules. Afterward, BSAC members teamed up with student leaders from the Minneapolis Youth Council to lead brainstorming sessions about action plans for how Minneapolis students could introduce their ideas to administration in their schools.

“There is a difference between school and education,” David Stovall told more than 200 Minneapolis middle and high school students at the event. “Education doesn’t always happen in school.”

Stovall is an associate professor of Educational Policy Studies and African-American Studies at the University of Illinois at Chicago, and a volunteer social studies teacher at Greater Lawndale/Little Village School of Social Justice High School. He highlighted several issues for young people during his keynote address, including the importance of building relationships with adults who support them both inside and outside of school and his concern over test-focused instruction in public schools.

“I’m not too concerned about tests, I’m concerned about us being able to make conscious, informed decisions because at any given moment it could mean our life or our death. That’s education to me,” he said.

Stovall expanded on his message of relationship building with students during his keynote at the “Education Equity in Action” event on the following day, February 13. This event was organized by the Minnesota Minority Education Partnership (MMEP). Teaming up with Cymone Fuller, lead organizer from “Solutions in Action” event and Malika Musa, a senior from Hopkins High School and intern with the Solutions Not Suspensions campaign, Stovall addressed an auditorium filled with teachers, school administrators and education advocates. He talked about the importance of honesty and transparency when building relationships with students. “If a young person is old enough to experience isolation, marginalization and degradation, they are old enough to be told the truth,” he said.

Musa spoke about how she felt about being in school, providing an example of the disconnect between students and school staff. “I do not like to be a school. I love to learn, by all means I love learning, but I hate being at school. That’s only because the environment has not called me in,” she said.