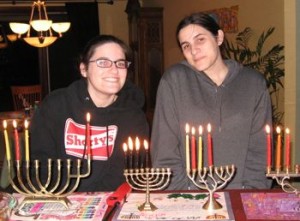 Chris Kellogg is the Jewish mom many strive to be. Mezuzahs adorn the doorposts of her kosher Golden Valley home, where knishes, kugels or matzah balls are staples on the table during Jewish holiday celebrations. Although both of her daughters have since left the nest, Chris still calls them every Shabbat to say the traditional blessing, a ritual she started when they were very young.

Chris is a frequent Shabbat morning greeter at Adath Jeshurun Congregation, as well as a Torah reader. She even serves on this Conservative synagogue’s board as the Vice President of Jewish Life & Learning.

“When I married my first husband, who was Jewish, I was not Jewish,” she says. “I agreed to raise our kids as Jews, but I did not convert until at least 10 years after our marriage — before our oldest daughter’s bat mitzvah.”

“I have been on both sides of an interfaith relationship,” says Chris, who also just this summer attended the wedding of her oldest daughter, Sarah Feingold, who also married someone who is not Jewish, but plans to raise Chris’s grandchildren as Jewish (once they come along — no need to rush the newlyweds!) 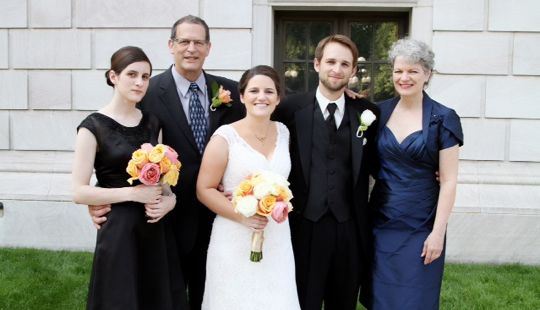 Chris Kellogg [far right], who has seen “both sides” of interfaith relationships, also has a daughter in an interfaith marriage. Chris will participate in a panel discussion about interfaith dilemmas at 7:30 PM Monday, November 19 at Adath Jeshurun Congregation.

Chris is sitting on an interfaith panel discussion at 7:30 PM Monday, November 19 at Adath to tell her story and to be a voice of encouragement, hope and support for others who may be experiencing a loved one in an interfaith relationship.

“What’s unique about this program is that it is intergenerational and looks at the holiday challenges that interfaith families deal with from many different perspectives,” says Barbara, who is the Program Manager of Family Life Education at JFCS and has written extensively about interfaith issues.

“The panel presentations are moving and insightful and the conversation that follows is always rich and meaningful. Participants leave with useful tools for dealing with these sensitive issues and a better understanding of their partners and extended families.”

Chris says that her siblings, who live in a different state, have always been very respectful of her religion. “When I was visiting them in Denver, and had to find a synagogue to say Kaddish for my parents, they were all very supportive and helpful.”

A lot of “getting along” and being understanding of each person’s differences is about respecting each person’s right to have their own beliefs, and not feeling threatened that this person does not believe what you do, Chris says. A big piece of it is incredible tolerance. For example, she says her husband “puts up with a kosher kitchen even though he could care less about it.”

Her daughter Sarah and son-in-law, Derek Swart, are now facing their first set of holidays as a married couple. “Sarah said to me ‘It is really nice that Chanukah is eight days long – so there is not a lot of emphasis stuck on just one day, like Christmas is.’” Still, Sarah’s in-laws are also respectful and she is not being asked to participate in any religious aspects of the holiday.

Sarah and Derek used JFCS for pre-marital counseling about religion, says Chris. “It was a good space to talk about these issues. They knew it was going to be a huge mistake to put off talking about it.” Chris says she did not do such counseling before marrying her children’s father, but that programs like this panel discussion are very helpful for all family members.

“There are incredible conversations and ‘aha’ moments,” at these discussions, she says. There are many other people in the same boat.

“An Exploration of Judaism for Interfaith Couples, Jews and People of All Faiths” is another related event Adath will host for the community on Tuesdays, January 8 – February 19, 2013.

“Virtually everyone in our community is touched in some way by interfaith marriage,” says Nina Samuels, the Adult Learning Director at Adath Jeshurun who is coordinating Monday’s discussion and taking RSVPs for it at ninas@adath.net. “This is one of the ways we are striving to provide a welcoming environment and to encourage people in interfaith marriages and relationships to find a place within our synagogue.”

The Interfaith panel discussion is in its 18th year at Adath. “I have attended nearly every program,” says Nina, “and I can say that each is unique and each is deeply meaningful. It has been very valuable with the help of JFCS.”

Top photo: Sarah (l) and Miriam (r) Feingold were born into an interfaith family, but mom Chris Kellogg converted to Judaism before Sarah’s bat mitzvah. Chances are you know a family like this.