Painting the Pavement in Corcoran (Photos by Cynthia Frost)

While a band played on the street corner and burgers cooked on a grill, more than 100 people gathered on Sunday to don painting clothes, pick up a paint brush, and plop down in the middle of an intersection in south Minneapolis.  They came to paint the pavement as part of a public art project, and by the end of the day an ordinary piece of street had become the pride of the neighborhood.

This Paint the Pavement event is one of several public art projects organized by Corcoran Neighborhood Organization (CNO), and the project came about due to residents’ concerns about cars speeding down a street right along a busy park.  “The block club did this one year ago with chalk,” drawings in the intersection in an effort to slow down traffic, said CNO Assistant Director Eric Gustafson.  “The project was already conceived by the residents – all we needed was some funding and an artist.”

CNO received a grant through the Metropolitan Regional Arts Council (MRAC) to fund ten public arts projects over a two year period.  Local artist Elise Kyllo, who has done several murals in the area, was selected for the project.  Kyllo met with local residents to create the design and was on-site Sunday to supervise the painting. 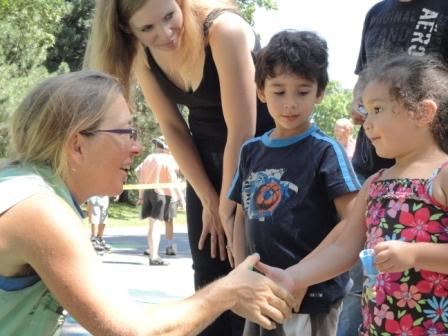 “I’m still buzzing with excitement,” said Kayllo a few days after the painting.  “It was just such a beautiful event.”  The art project was to meant to express the values of the neighborhood, and sustainability was a major theme. “They didn’t want a geometric shape” said Kyllo, “they wanted something organic and flowing.”  She focused in on the concept of a squash, with its long tendrils circling the intersection and squash blossoms bursting with color.

Melanie Casiday, who lives on a corner of the intersection and was part of the planning and painting, described how much people loved being part of it.  “The kids would come and paint, and they really took ownership of that one little area they were painting.  They would come back again later in the day to see what had happened to their work,” said Casiday.

Street murals got their start in the Twin Cities with just that thought in mind, sometimes described as Placemaking.  St. Paul resident Andrea Erickson became inspired by City Repair projects in Portland Oregon that were “reclaiming urban spaces to create community-oriented places.”  She approached the City of St Paul, and a pilot project was launched through the public works department in 2006.  More than eight intersections have been painted (see map), many in the Hamline Midway area.  The Hamline Midway Coalition has acted as an incubator for these projects, serving as a resource for groups that want to do it, according to Executive Director Michael Jon Olson.  The projects are consistent with their Placemaking activities, bringing residents together to turn generic public spaces into community places.

Back in Corcoran neighborhood, Casiday is seeing neighbors coming to the spot, walking around the mural and claiming it as their space.  An event that invited neighbors to create art together has turned a dangerous street corner into the beginning of a community center.  Neighbors are planning a street dance and harvest festival on the site this fall to close out the season of the nearby Midtown Farmers Market.