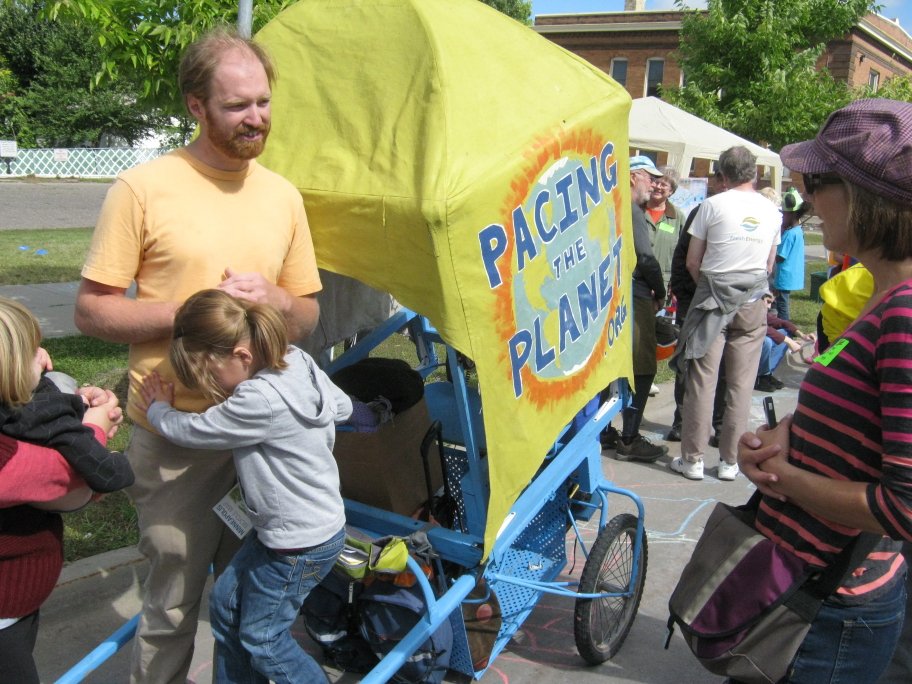 from northern Missouri to Duluth, MN

While taking in the Open Streets and Harvest Festival in North Minneapolis’ Lowry Avenuelast weekend, I met an amazing young family that is making a most unusual journey.  Gavain U’Prichard, his wife Dana, and their two-year-old daughter, Tillwyn, are walking 1,000 miles on a trek between rural northeast Missouri and Duluth, MN, as witnesses to a global crisis.

The U’Prichards had joined forces for the day with the local conservation organization MN350, which was holding an event called Draw the Line to raise public awareness regarding climate change.  A prime attraction was the hand-towed wagon they had fashioned from a pony cart and outfitted with a canopy emblazoned with the name of their project: “Pacing the Planet.”  Even more unusual than the wagon itself was the manner in which they were propelling it up and down the avenue: on roller skates!

The early summer of 2012 had brought the worst drought in anyone’s living memory to northern Missouri, and the garden that was to sustain the U’Prichards family had withered and died.  “We needed to do something,” reads their blog.  “We wanted to illustrate with our own lives that the occasion calls for putting down our routines, leaving our old ways pristinely and utterly, the way the old city of Pompeii was left frozen in ash, tables still set, business abandoned in mid-stride.”

The U’Prichards then created “Pacing the Planet” to inform the public about the cause, consequences, and solutions for the climate crisis and to convey the urgency with which bold and innovative action is needed.  They are doing this by engaging in conversation and passing out information sheets to all with whom they come in contact.  The substance of their message:  destructive weather events are being triggered and worsened by global warming. America must lead in curtailing the use of fossil fuels – those that produce heat-trapping carbon dioxide emissions — and replacing them with wind, solar, and other renewable energy sources.

Their daily routine involves strapping on knee and elbow pads, wrist guards, and helmets to accommodate conditions at the shoulder of the road.  While avoiding hazards like pebbles, car parts, nails, and dead racoons, they have found that skating provides them with both mental and physical diversion as they travel.  However, they never skate the wagon with their toddler aboard; only when she is safe at camp with her other parent does the skating begin.

Having spent the prior week in the Twin Cities of Minneapolis and St. Paul, covering nearly 50 miles while traversing both, they planned to resume their race for Duluth the day after the festival to beat the return of cold weather.  I accompanied them on my bike for a short distance toward their camp to help in any way I could, watching anxiously as Dana guided the wagon up and down hills, along highly traveled 4-lane streets, and through treacherous intersections.

The U’Prichards are on a truly spiritual journey, having relinquished most of the comforts the rest of us consider essential to our lives — especially those involved in raising a family.  I am deeply moved by their will to leave behind the shelter of their Missouri home to help alert the country to the urgency of the climate crisis. Their idealism and dedication to this cause is truly inspirational.  More information on their journey is available on their web site, http://www.pacingtheplanet.blogspot.com/ .