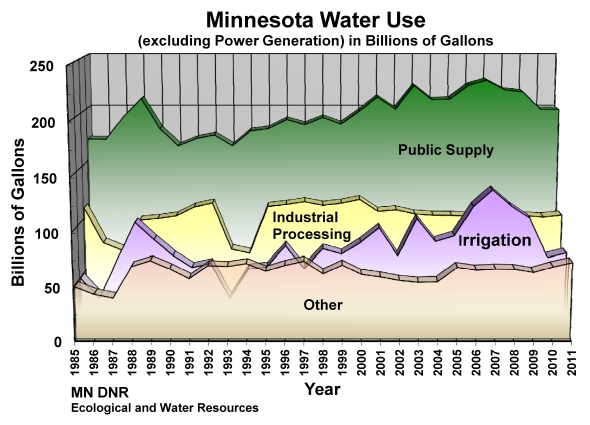 It’s no secret to most Minnesotans that the Land of 10,000 Lakes is in the midst of a drought. What might surprise some, however, is that lack of precipitation is just one cause for lower lake levels and groundwater scarcity.

Parts of Minnesota are not achieving groundwater sustainability, and residents do not always have adequate information to make informed decisions that could mitigate the problem.

For that reason, a joint meeting of the House Environment, Natural Resources and Agriculture Finance and the House Legacy committees, heard testimony from a panel of groundwater resources experts on the challenges Minnesota faces.

“We can simply think about this in terms of two key risks,” said Jason Moeckel, section manager of Ecological and Water Resources for the Department of Natural Resources. “One is the overuse of our groundwater and the second is the contamination of our groundwater.”

A joint committee meeting next week will focus on contamination; the topic under discussion at this meeting was overuse.

Ali Elhassen, manager of water supply planning for the Metropolitan Council, told lawmakers that in three DNR observation wells around the Twin Cities metropolitan area, there has been a trend of water level decline, with some showing a drop of 1 foot per year since monitoring began.

Seventy percent of people living in the metro area now use groundwater as their water supply, which has adverse impacts on surface water bodies like White Bear Lake, Elhassen said. He said studies conducted by the USGS have concluded there is a correlation between increased groundwater pumping in the area and the lake level decline, which is an example that shows “greater reliance on groundwater resources is not sustainable.”

Jim Sehl, a DNR groundwater specialist, said that rural Minnesotans face similar challenges. With about 7,000 irrigation wells now in the state, nearly 68 billion gallons of water are used each year for irrigation in Minnesota. He noted that in 2010, considered a fairly wet year, as much water was used for irrigation as in the historic drought of 1988.

In southwestern Minnesota, Sehl said the city of Marshall, which uses about 1 billion gallons of water per year, has lost 50 feet of head on its aquifer since 1990 and had been forced to drill wells 13 miles north of the city, spending $10 million to put in a pipeline to bring the water to residents.

In 2012, Worthington had to “do an emergency interconnect” with a town in Iowa to bring in 350 gallons of water per minute and sustain production in the community.

Despite the challenges, Stark said Minnesota has “a unique opportunity to ensure sustainable water” and that a lot has already been done, including the Clean Water Legacy Act. The targets for sustainability are moving targets, but the process shouldn’t wait, he said.

“White Bear Lake, declines in some of our key aquifers and the drying up of some of our urban wetlands are some examples of why we need to focus on this problem now,” Stark said.

Rep. Paul Torkelson (R-Nelson Township) pointed out that the problems in White Bear Lake were not new and there had been an issue with lake levels there for quite some time.

Stark said low precipitation was certainly “a part of the story” on the decline in levels on White Bear Lake, and others in Ramsey County, but that “several lines of evidence” suggested that municipal pumping around the lake was “adding to the problem and effecting lake levels.”