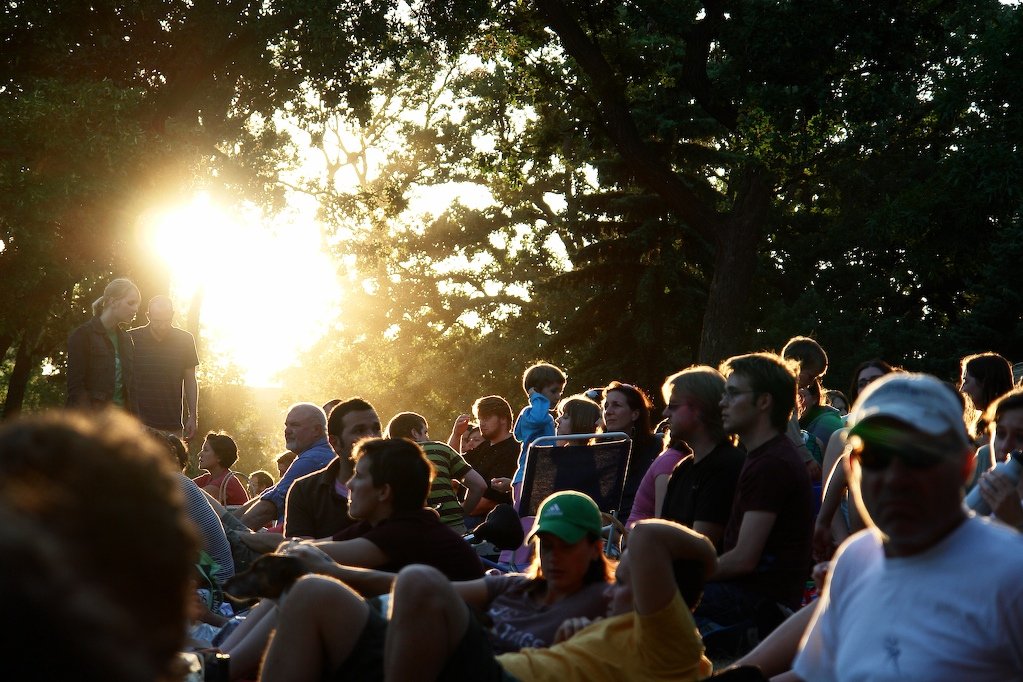 A crowd settles in for a movie in Loring Park, 2008. Photo by Marcus Metropolis (Creative Commons).

Over the past decade, the Twin Cities’ outdoor movie scene has been changing. The other day my friend and I were talking about drive-in theaters, we could only think of one still operational locally: Vali-Hi Drive-In off of East 94 and Manning in Lake Elmo, on the outskirts of the Twin Cities. Drive-in theaters are disappearing; many of us probably have fond memories of going to the drive-in at some point, but they—like video stores—are slowly becoming extinct.

With the decline of drive-in movie theaters, there has been a recent rise of outdoor film screenings (and even some film festivals) that have dedicated programs to serve your dusky movie-watching (and music-listening) needs. A few weeks ago, Madeline Island, located at the very northern point of Wisconsin in Lake Superior (and about 90 miles east of Duluth) held a three-day film series. Screenings taking place outside, where family and friends could bring blankets, chairs, and tables and set up before each screening. Matching movies on a gigantic blow-up screen, overlooking Lake Superior, sounds magical, and I wish I could have attended the series.

This weekend, July 26 and 27, the tenth annual Free Range Film Festival takes place in Wrenshall, Minnesota—about two hours north of the Twin Cities and 30 minutes south of Duluth. Over the two days, the festival will be showing films and hosting live music performances in a barn. Yes, a 1916 barn, and one that is big enough to host a 24-foot wide screen inside the hayloft! I asked one of the four coordinators from Free Range, Annie Dugan, what the story is; she replied in an e-mail, “We basically started because we had this big, beautiful barn and no farm animals to put into it. There was a group of us: Val Coit, Mike Scholtz, Janaki Fisher-Merritt, Robin DeCaire, and myself that got it started and we have had a lot of help along the way. The main purpose was to show cool movies in a big old barn and I think we’ve pretty much kept to that mission ever since.” Look for musical performances by Portrait of a Drowned Man and William Gamble in between film screenings—and see their music featured in two of the films screening at the festival.

In a few weeks, on August 10, the 11th annual one-day Square Lake Festival in Stillwater, Minnesota will take place with an eclectic line-up of bands playing sets in between short films by local animators and filmmakers—with one of the featured bands, Dark Dark Dark, performing live accompaniment to at least one of the short films. (The film schedule has not been released as of this writing.) One of the big attractions to Square Lake is it encourages people to ride their bikes from the Twin Cities to the festival, and they are welcomed to camp at the nearby Square Lake County Park. Bikers also get an additional ticket discount for purchasing tickets in advance and also, bikers can meet the day of the festival at Hub Bike Coop (or Cycles For Change) and bike together with Peace Coffee providing a sag wagon to help out with anyone who has also brought their camping gear. Tickets should be bought in advance, as this event sells out every year.

For the past few years now, the Twin Cities have featured not one, but two different music-and-movies-in-the-park series, put together by the Walker Art Center and Vita.mn, respectively. This year, both series, free as always and open to the public, have tempting film titles and intriguing bands that will be showcased before each film screening.

The Walker series, “Summer Music & Movies: Roadways,” begins next Monday, July 29, and continues for the following three Mondays in Loring Park (in the event it rains, the music and movies will take place in the Walker Cinema) starting with music at 7 p.m. and films starting around dusk with food trucks A Cupcake Social, AZ Canteen, and Gastrotruck on site. Three out of the four film titles are somewhat off the beaten path but were selected by Mexican artist Abraham Cruzvillegas, whose work is featured in an art exhibit at the Walker. He’s chosen Italian master Pier Paolo Pasolini’s comic road trip The Hawks and The Sparrows to kick off the film series, with local rockers Prissy Clerks providing the tunes for the evening. The series continues with the Mexican narrative Cochochi and music by Charlie Parr + Roe Family Singers (Monday, August 5); the Mexican documentary In the Pit and music by The Chalice (Monday, August 12); and the series concludes with Tim Burton’s 1985 (still-classic) comedy Pee-Wee’s Big Adventure and music by Zoo Animal, Aby Wolf, and Grant Culter (Monday, August 19).

Vita.mn’s fifth annual “August Music & Movies” starts on Friday, August 2. It will also feature four films and music acts in its series, taking place at the Lake Harriet Bandshell with music starting at 7:30 p.m. and films starting at 9 p.m. Kicking off the series will be local wunderkind darling John Mark Nelson playing before a film older than him: the 1985 adventure film that never dies, The Goonies. Filling out the remaining Friday dates will be 1987’s far-fetched Adventures in Babysitting with music by Now, Now (Friday, August 9); Starring Leaf Phoenix (better known as Joaquin today) is 1986’s dull Space Camp with music by buzz band Strange Names (Friday, August 16); the series concludes with everyone’s favorite inventor father, Rick Moranis, in the 1989 family mega-hit Honey, I Shrunk the Kids with music by Frankie Lee (Friday, August 16).