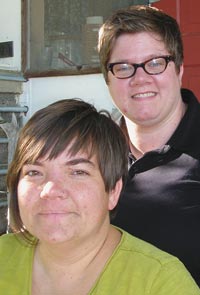 Both Jessi Tebben and Ashley Schuman try to keep open hearts and minds as social and human services workers, and as moms.

But nothing-not Tebben’s former work as a coordinator of a Twin Cities LGBT school program, Schuman’s work in affordable housing, nor their community activism-could have prepared them for the past 15 months.

Tebben and Schuman each knew they wanted children when they met one fateful night in November 2007.

Tebben moved from Minneapolis to Cambridge in 2008 to be with Schuman, who had bought a house in her hometown.

They had a commitment ceremony and were filling out adoption paperwork while on their honeymoon in the Colorado mountains.

Being a mixed-race, same-sex parent family in Cambridge has brought its own challenges. On the positive side, the Cambridge-Isanti schools have been wonderful, they said, accommodating their children. A county mental-health caseworker has been terrific, too.

“But here’s the big pushback: Jessi and I can’t walk down the street and hold hands because we’re terrified,” Schuman said. No one’s ever threatened them, but people have come to their house and questioned their lifestyle.

“Where else does this happen?!,” Schuman exclaimed.

Their kids have also faced racism-one was taunted on Martin Luther King Jr. Day, Tebben said. The two have coped with the help of friends of color plus some self-honesty about their own whiteness and privilege. “I can’t imagine doing a transracial adoption without having some connection with people of color.”

Fitting in means being “safe,” Schuman said. “We feel like we have the rainbow banner on our shoulders and that we have to be safe and palatable to everybody and if we aren’t, we are doing a major disservice to the LGBT community,” she said.

Tebben, who jokes that she used to be “gay for pay” when she headed the Minneapolis schools’ “Out for Good” GLBT program, said: “There are moments … when you’re having to make decisions about what it is you’re going to say. Every time you’re just telling a story about your life, you might be bringing up a subject that’s up for debate … You don’t get to bring your full self to the table.”

Being moms to their children-three girls and a boy who are siblings, ages 3 to 12-regularly involves keeping chairs from crashing through windows, navigating emotional meltdowns and heading off self-destruction of the psychiatric emergency ward variety. Tebben and Schuman have juggled this while Schuman commutes an hour each way to work every day to support her family of six-and Tebben manages the home front, having given up a good job and health insurance to do it.

“It’s beautiful to me what she does every day for our kids,” Schuman said.

Both give love and connection to kids who mostly don’t understand their new surroundings. All the children have experienced and witnessed significant physical and emotional abuse.

Some days have minimal blowups while others end with breakdowns in the waiting room or parking lot of the hospital psych ward. A few have family closeness and connectedness as picture-perfect as the family’s Christmas-card photo.

“The amazing thing is that all our kids are super bright, resilient and in so many ways, survivors,” Tebben said. “They have all made progress and are surprisingly connected to us and call us Mom. They understand in some part of their brain that we’re trying to keep them safe, and that we’re a family,” Tebben said.

“It’s a gift to be in a space with people who maybe have very different perspectives and maybe even disagree greatly-not just about run-of-the-mill issues but issues that come down to your own identity-and find common ground. And it’s not comfortable and it takes work,” Tebben said.

“The only way to do that is to thoroughly let go of your desire to change people and to accept that really scary idea that you might walk away a little changed yourself.”

Ironically, Tebben is uninsured. Despite Schuman’s good job with the state of Minnesota, her lesbian partner cannot be on her benefits policy due to the state’s current Definition of Marriage Act.

Looking around their jungle gym-filled backyard on an atypically quiet day without children home, Schuman said, “It’s amazing how people create families in all sorts of different ways.” Asked if these children might become too challenging for them, Tebben responded: “That’s not an option.” Her partner added: “To see it through, we know that we may be asked to do more than we ever thought possible.”