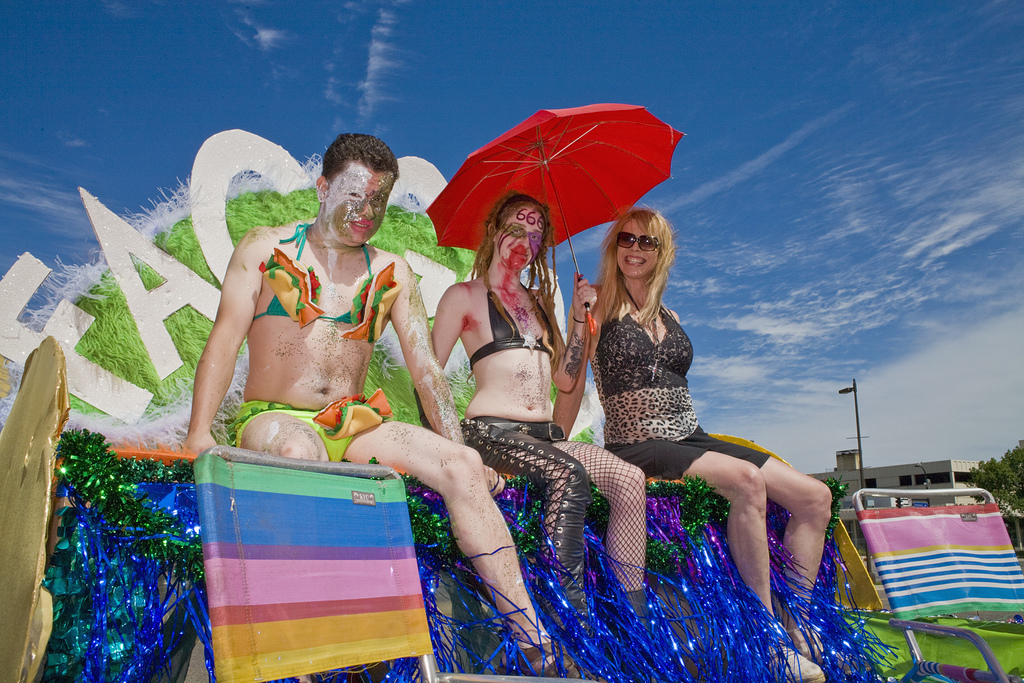 Out for Equity in June's Pride parade. Lane gives a thumbs-up.

As Minnesota’s largest district (Anoka-Hennepin) waded through the consequences of neglecting its not-straight population, St. Paul Public Schools, the state’s second-largest district, was ramping up its already-strong LGBT program.

St. Paul Public Schools’ Out for Equity program is rare – the 18-year-old program is one of fewer than 10 district-level LGBT programs in the nation. (Minneapolis has one, too.) Two staff members host school support groups and a weekly LGBT teen social night, provide resources to school Gay-Straight Alliances, advise the district on policy, and offer one-on-one counseling to students who are struggling.

This year, with new director Tiffany Lane at the helm, the program’s offerings widened to include monthly support groups for staff and parents who identify as lesbian, gay, bisexual, trans, queer or ally.

The Daily Planet sat down with Lane to talk about what to do when the Marriage Amendment comes up in class, why LGBT parents and staff need support, too, and whether programs like Out for Equity can prevent disasters like the one in Anoka-Hennepin.

I understand why school-based LGBT programs like Gay-Straight Alliances are valuable, but what impact can a district-level program have?

It’s another avenue of support for everyone in our district. It’s also a way of holding the district accountable, and making sure that everyone feels safe and included. It’s hard to be someplace where you don’t know if anyone else is like you. You can’t see anyone else; no one is advocating on your behalf. You don’t want to feel that you’re alone and that you don’t have anywhere to go or anyone to talk to.

Can you tell me about the new parent and staff groups?

There was an employee group a number of years ago. I started it back up, because I heard from some employees that they didn’t know of any other [LGBT] employees in the district or in their school. They felt that they were the only ones that were out, so what I wanted to do was connect employees to other employees — provide time to socialize and talk about some of the issues that do impact these employees.

Same with the parent group. I was told when I came in that not a lot of parent activities had been done in the past, so this was a way to connect parents to parents, whether they were LGBT-identified themselves or had kids that were LGBT-identified, so they could build that support group right there, and also socialize and have some fun.

Parent group was an average of a couple parents. So that’s pretty low, but when you start a new group you start out pretty small, which is not a big deal. The employee group had five or six people.

What issues come up in the staff support group?

Domestic partner benefits, some conversation about the marriage amendment. What can we do if there were [homophobic] remarks or things that were said? A few employees said there were remarks that were made, and they didn’t know what to do, because in the moment you’re shocked that someone would say that. It’s like should I say something? Should I not say something? Especially if you’re not out — that can add another dynamic to it.

I just tell them, if you feel comfortable speaking up, say something. If you don’t, maybe pull that person aside, or even talk to your supervisor. We don’t want to create this environment where it’s hostile and people can’t be who they are.

What issues come up in the parent group?

One parent mentioned when she came to the district she wasn’t sure how to decide which school would be best for her student.

Another one: the marriage amendment — about the nasty messages that are coming out, and what they’re saying to our students and their kids. How can they react, knowing that so much hatred is going to be out there in the next few months?

Can you talk more about how the marriage amendment is affecting staff, parents and students?

As a school district we can’t take a stand. [But the school board can. They recently passed a resolution opposing the marriage amendment.] We’re focused on educating, so having information available about what the amendment is, what it specifically says. It’s a controversial topic and those are topics that are really hard to facilitate and discuss in the classroom, so helping teachers get some pointers for if it does come up. That’s not just for the amendment, but any conversation that is seen as controversial or difficult — how to foster a healthy conversation in your classroom without it turning ugly.

What advice do you give?

I tell people it’s really important to know what the amendment says, and [to encourage students to keep] an open mind. Yes, people can share their opinions, but also this is a classroom where everyone is welcome, and we’re not tolerating certain things.

In a Daily Planet interview a few months ago, new school board member Mary Doran also mentioned the challenge parents who identify as LGBT confront as they search for the right school – what advice do you give those families?

Set up meetings, ask questions. What’s your parent makeup? Some parents have been flat-out honest and asked, ‘Do you have LGBT families? Have there been any issues with tension around having LGBT students or families in your school?’ Why beat around the bush? Be straightforward.

Have you done any work around bullying?

I sit on the bullying task force for the district. We’re looking at the policy and making sure it’s good, making sure it addresses everything that needs to be addressed

I’ve had a few calls, about a kid being harassed. What I really did this year was try to raise the visibility of the program, so people generally know how to get ahold of me. We’ll brainstorm what people need to do, or what they’ve done. We check in on them to see how the situation has been handled and how it’s being settled.

What I’ve realized is, people want to do something, but they don’t realize what to do or what is protocol, so they look to me as a resource, so it doesn’t get to a point where you have a bigger problem or even a legal issue, on top of that.

How often have you gotten calls about bullying issues?

Oh, they’ve been very few. Maybe a handful, not even.

Do you think a group like this could have prevented what happened in Anoka-Hennepin?

I think if you don’t have things in place, such as a policy that’s inclusive and an environment that already is welcoming to people, that is going to be detrimental to whether or not you have bullying or kids that are out. So I think there’s a lot of factors as to why the whole Anoka-Hennepin thing kind of blew up. People see problems, and they think it’s easy to ignore it, and it will go away, but that never happens. As history has pointed out, that’s never the case. It just gets bigger and bigger until finally a bomb goes off, and then you’re dealing with media and legal issues, five or six suicides. You’ve got to handle situations. You can’t ignore it. It won’t go away.

Do you identify as LGBT or queer?

Was school difficult for you?

No, but I came out later. I came out in college when I had the language. I knew I was different, and I was looking at my friends differently, but I didn’t know what the word was yet. Then I got to undergrad, and I figured it out. I was one of those brainy kids. I was in the honors. I was kind of active, maybe overly active. I just kind of did my thing.

I’ve been doing LGBT work since I was in my undergraduate, so seven or eight years. This is second nature to me.

I feel very welcome. I feel that my programs are welcome and I feel like I have a lot of good people in my corner.