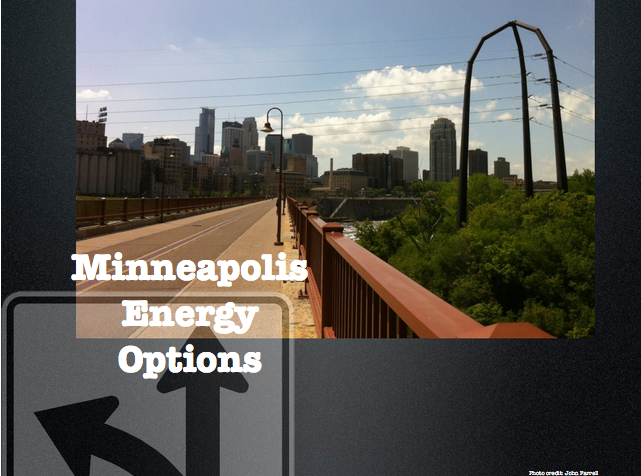 Should Minneapolis explore the possibility of having a municipal energy system?”

That would mean taking over the infrastructure of Xcel Energy in Minneapolis, and that’s the question we want on the ballot in 2013. We in the Minneapolis Energy Options campaign are just asking for an exploratory process to determine whether we could do it as well or better than Xcel and have a system that is consistently incorporating more clean, affordable, reliable, and local options to our energy system.

Both Xcel and Centerpoint Energy contracts with the City of Minneapolis are up for renewal. Contract isn’t exactly the right word, but it’s basically a 20-year contract. Xcel’s comes up in 2014 and Centerpoint’s comes up the following year.

What we have at this point is sort of like a once-in-a-generation opportunity, and it comes at a critical time when the city is also trying to come up with its own climate change action plan. The way the contract is written, the city gets approximately $15.5 million dollars every year from Xcel, but if we were in fact paying ourselves, that money would stay here. We control here, like the water, which is a municipal utility.

The Minneapolis Energy Options Campaign began as conversation between George Crocker (North American Water Office) and myself and a young man named Timothy Denher Thomas back in about November 2011. That conversation was some kind of spark because Timothy began to pull some people together. We began meeting in the winter of 2012 and it’s been steadily growing since then, with individuals and community councils and environmental groups signing on.

In Minneapolis, there have been citizens sitting around in a steering committee and working groups to feed into a city climate action plan that would be a blueprint for how the city can lower its emissions by year 2025.

I see a relationship between this municipalization campaign and the climate action plan. because if we are going to meet certain targets, we have to have mechanisms to measure how we are moving from where we are to where we need to be.

Even if we don’t actually decide that a municipal system is the way to go, we at least want to make sure that we have a specific “ask” that the energy company is obligated to meet by a certain time. We think that a 20-year contract is not the way to go again. We think we need a shorter contract with specific measures to determine whether we are meeting our goals to become a greener, cleaner city in its energy consumption.

We also think that any plan should have a lot of localization. This could be creating more positive ties between rural and urban Minnesota. If western Minnesota is an ideal place to have wind energy as one of the energy sources for the state, Minneapolis could be a place for production of that machinery for both wind energy, for solar energy and other green means of producing energy. We could be creating jobs here.

In a way, it reflects a growing trend of relocalisation. Because that’s also happening with food — more and more people growing food locally, both in the city and in rural Minnesota, of course. But what we are looking at is not genetically modified seeds and crops but organically grown food, producing more jobs by people working in this local ag industry that is providing for ourselves locally.

We are also finding that there might be different ways of approaching this thing. We think it’s important to have it be a referendum that requires us to network with communities across metro Minneapolis, sharing with people the information that they need to make decisions that are in the interest of Minneapolis citizens, both the ones who live here now and the ones who will be living here, like our children and our grandchildren.

We’ve got to have a vision that is not just about immediate profit, increased consumption and a mindless disregard of the consequences of the choices that we make that contaminate the water, the soil, that contaminate us.