Born and raised in Texas, Oscar Del Sébastien came to Minnesota at the age of 15, “as a migrant worker in a migrant family.” After completing high school, he “majored in confusion” at Moorhead State, but graduated from the University of Vermont with a degree in art and literature. After a decade in New England, he came home to Minnesota and became a teacher during the day and a musician after school hours.

As a teacher and musician, Oscar Del Sébastien was already familiar with many forms of social media. “I was aware of most of the social media that we looked at, but it was nice to put it all together and talk about them as one cohesive thing that we could use as a tool,” he said. “Up until this cohort, I was just fragmented about it. I didn’t know what you could use specifically, [how] would they compete.” 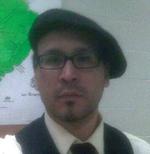 As editor of the Corcoran neighborhood newsletter, he has strong feelings about the importance of journalism. “We have a responsibility to share in that,” he said. “Mass media — where most of us are not represented — is like the jet stream around the earth. You can get on a hot air balloon and rise up but you’ll bounce off of it until you get to a crack … As journalists, we should look for those cracks.”

He’s making big plans to pass on social media skills to groups that he works with in the community.