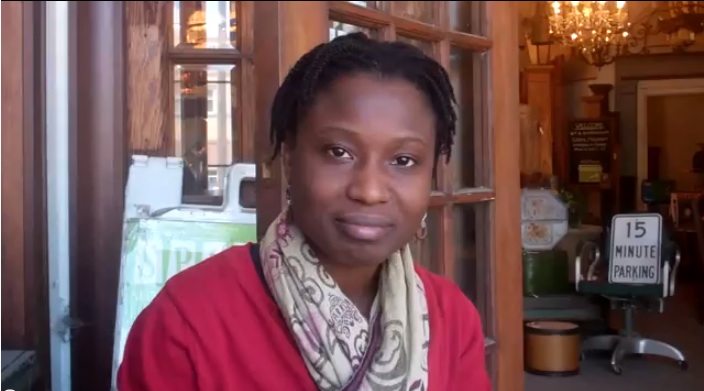 Meet Beaudelaine Pierre, a Haitian diasporan living in Minnesota who is working toward bringing the Haitian community in Minnesota together. She wants to create a more organized and unified Haitian diaspora in the Twin Cities, which is separated by both geography and internal struggles.

Pierre currently works with women and immigrant communities as a coordinator in a leadership program for girls, and as women’s program coordinator for a non-profit called Women’s Initiative for Self-Empowerment (WISE). She also brings her lived experiences and expertise working in development, nonprofits and journalism in Haiti.

So far, Pierre has helped convene two community meetings to discuss issues affecting the Haitian community in Minnesota. The first meeting was at the Minnesota Humanities center in November, and the second took place at the Wilder Foundation in mid-March. More than 60 people – both young and old – attended the March meeting, she said.

“People need space where they can work together and talk about issues. It’s a way to connect and find out how we can work together,” Pierre explained. “Haitians are capable of doing something not only for themselves, but for the larger community in Minnesota. We have such a rich history and culture… but we’re not working together.”

She also taking the lead on two main projects Haitian community members are working on: building a Minnesotan Haitian community center, and creating a Haitian arts and cultural center. The purpose is to guide Haitian Minnesotans, connect them to resources, and share their cultural heritage with the rest of Minnesota.

Pierre first came to Minnesota four years ago on an international fellowship from Haiti at the University of Minnesota Humphrey School of Public Affairs.  She left with her two young children right before the earthquake hit in 2009. Immediately, Pierre observed how disconnected and dispersed the Haitian community was, she said; it took her nine months to see or meet another Haitian.

That first encounter was with a complete stranger she spotted on the bus. “I saw him and I knew he was Haitian!” Pierre said. She recounted how she purposely opened a book with a French title on the cover to get his attention. Since then, she has taken on the task of building more relationships with Haitians in the Twin Cities, and bringing them together.

“We don’t have many Haitians in the Twin Cities, the census says we have only 19 Haitians living here, but I know there are at least 50 Haitians that go to our church every Sunday,” she explained. She said she knows there is a community living on Lake Street in Minneapolis, and her pastor has told her at least 500 Haitian families live in Minnesota.

But nobody really knows the exact number. “That’s why we are in need of building this community. It’s so dispersed,” Pierre said.

Pierre is excited to see how the Haitian diaspora in Minnesota moves forward and is optimistic to accomplish her vision of unifying the community, she said.