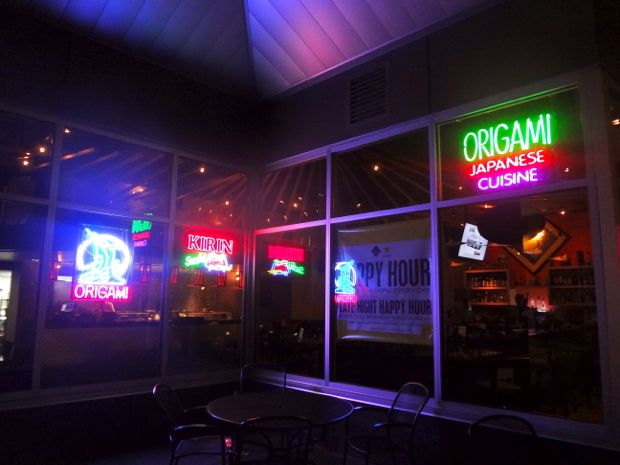 Origami Izakaya: can the Japanese restaurant be saved?

I don’t know if you have noticed this, but a lot of Japanese restaurants have started adding Izakaya to their name, or their menu, or both. I’m not sure which came first, but we now have Zenbox Izakaya; Wasabi has added an Izakaya and hot pot menu, Obento-ya has an Izakaya happy hour menu; and Masu Sushi and Robata has a separate Izakaya list. The newest addition to the Izakaya crowd is Origami Uptown’s new’s late-night Izakaya menu.

Izakaya, according to Wikipedia, is “a type of Japanese drinking establishment which also serves food to accompany the drinks.” What it means locally is a bunch of menu options that go beyond sushi, tempura, and pseudo-Japanese hibachi cooking.

Why izakaya? Why now?

I have a theory. The massive influx of fake Japanese restaurants and cheap sushi has just about destroyed the whole Japanese brand. Ten years ago—or maybe 20—Japanese restaurants were uncommon, and Japanese cuisine was considered very sophisticated. Putting raw fish or sea urchin roe in your mouth was considered a bit daring. Then, some enterprising restaurateurs figured out that the profit margins on sushi are huge. (Sure, raw fish is expensive, but the amount of raw fish in a typical serving of sushi is very small.)

Now you can get sushi everywhere from Chinese buffet restaurants to supermarkets. The glamor is gone.

So “Izakaya” offers Japanese restaurants exactly what they need to remake their image and recapture some of that old mystique: something new and exotic and authentic-sounding.

At any rate, the good news is that Origami’s new late night Izakaya menu now offers some adventurous new small plates that aren’t available on their other menus, such as the ika mentaiko (cured squid with spiced pollock roe [$6]), tuna poke (actually a Hawaiian dish, but why quibble?), and takowasa (raw octopus). The ika mentaiko has a slightly fermented flavor and a slithery texture, but is actually quite tasty, while the poke is basically a coarsely chopped tuna tartare. We only sampled a few of the small hot plates: the moist and flavorful ebi shumai (steamed shrimp dumplings, $5) and the ika tempura, squid deep-fried in a light and delicate batter.

The menu also offers reduced prices on some other items, including their pork ramen noodle soup ($8, regularly $11.75) and downsized portions of their donburi (rice bowls):  grilled chicken donburi and yaki-niku domburi (broiled sliced beef ribeye with onions) are both $6, regularly $13.75. A few of the specialty sushi rolls are offered for $1 off the regular price.

True to the original spirit of the Izakaya, Origami Uptown offers a full bar, including a decent selection of sakes, Japanese beers and shochus—a clear, subtly flavored spirit—typically around 25% alcohol, distilled from barley, sweet potato, or rice.