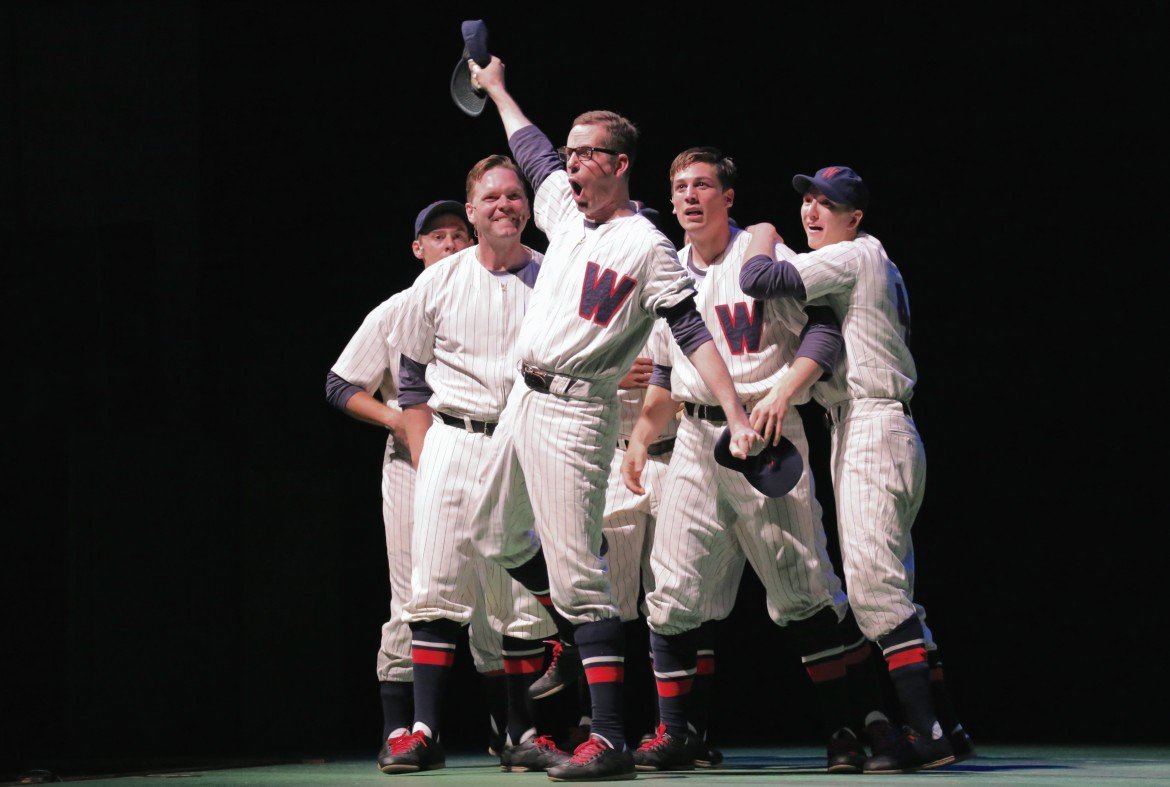 From the doorman welcoming patrons to “Griffen Stadium,” to the hotdogs and beer for sale, Ordway Center blends baseball and Broadway in its revival of the 1955 smash musical show Damn Yankees. Though a bit dated, the Richard Adler and Jerry Ross musical, under the direction and choreography of James A. Rocco and Sharon Halley, shows one does not need to be a baseball fan to have an enjoyable summer evening at the ballpark.

The musical is a re-telling of the Faustian story with Joe Boyd, a middle-age real estate agent, who is a die-hard fan of the Washington Senators (the team that later became the Minnesota Twins) in the 1950’s. The Senators can’t seem to beat the New York Yankees. Upset with the Senators’ latest loss, Joe cries out that if the team had a “long ball hitter” they could beat the “damn Yankees.”   He then seals his fate uttering: “I’d sell my soul for a long ball hitter.” On the spot pops in “Mr. Applegate” who takes Joe up on his offer. He promises to turn Joe into the greatest baseball player of all time who can lead the Senators to the pennant. Although reluctant to leave his wife, Joe agrees to the bargain but insists on an escape clause – allowing him to back out of the deal by September 24th.   Applegate transforms the middle-age Joe into a young Joe Hardy and gets him a tryout with the Senators. Everything is going well with the Senators heading to the pennant with Joe’s help, but Joe misses his wife. Applegate brings in Lola, who sold her soul to Applegate more than 170 years earlier, to distract and seduce Joe as the story works its way to the inevitable foiling of Applegate’s plans and Joe’s reunion with this wife.

I saw this musical decades ago when I was a child, but I never realized its rich trove of song classics including “Heart,” “Whatever Lola Wants,” “Two Lost Souls,” and the heartrending ballad “A Man Doesn’t Know.” The Ordway brings together a top notch singing cast of both national and local performers to do the songs justice. One of the funniest numbers in the show was Applegate’s singing of “Those Were the Good Ol Days” recounting his ability to generate evil over the centuries, but the song had a couple of inappropriate racial stereotypes that I was surprised had not been excised in this revival.

The program notes that even though in 1955 very few African-Americans were playing professional baseball, this production casts two African-Americans in the roles of both Joes in this multi-racial cast. Lawrence Clayton plays the middle-age Joe while Thay Floyd convincingly playing a younger version of Joe. Both actors, with their strong tenor voices, provide a moving duet singing a ballad about their love for Joe’s wife Meg. Tari Kelly as Lola excels in her musical numbers, and both she and Floyd have the voices and moves to carry off the jazzy tune “Two Lost Souls.” Monte Regel Wheeler as Applegate makes the most of his scenes and creates a campy but sinister villain. Other strong performances were provided by Kersten Rodau as Gloria, a Lois Lane type hard nose reporter, and Ann Morrison as the beloved Meg.

One drawback to the production was the placement of the orchestra at center stage. It left only a very cramped space for the dance numbers. The dancers accompanying “Two Lost Souls” seemed particularly constrained for such an exuberant song. Also, with the orchestra’s close proximity, it sometimes drowned out some of the singers’ words.

From the show’s opening number about sports’ widows to the final rendition of “Heart,” this Ordway production of Damn Yankees serves up campy and energetic performances demonstrating the continued vitality of this 60 year old classic.