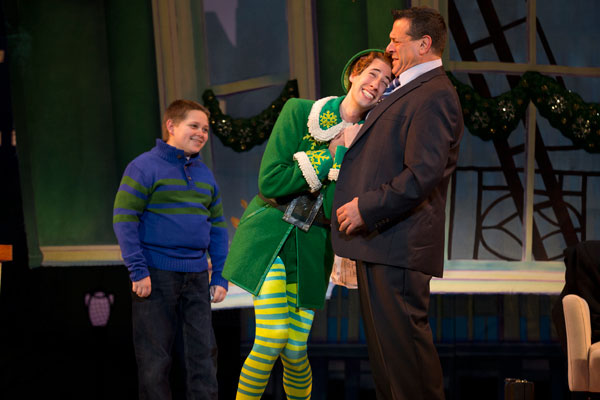 The Ordway Center for the Performing Arts this month introduces the Twin Cities to a new Broadway musical dedicated to spreading Christmas cheer. Years ago they introduced Irving Berlin’s White Christmas; showing now is Elf the Broadway Musical. While watching Elf I was comparing the two, and found Elf lacking in extravagance.

Elf the Broadway Musical tells the story of Buddy, raised at the North Pole by Santa and the elves. As Buddy gets older he finds himself towering over all of his peers and one day he overhears the elves talking about the secret: he is human! Santa fills him in on his true parentage, and Buddy decides to head to New York City to find his dad. He has dreams of the two of them sharing in all of the traditions he believes come with a father-son relationship: playing in the snow, having tickle fights, making gingerbread. What he finds instead is a stressed-out publishing executive struggling to find time for the rest of his family. How Buddy shows his dad the true spirit of Christmas unfolds in the play, based on the 2003 movie.

The challenge of creating the height difference between Buddy and the elves is handled by director Sam Scalamoni by having all of the actors portraying elves working on their knees.  This is becoming a common stage practice, so there is no attempt made to cover the fact from the audience. I was hoping for something more clever, but I’m not sure what that would be.

The set, designed by Christine Peters, works well. Transitioning from the North Pole to New York City to an office in the Empire State Building to Santa flying away in his sleigh from Central Park is handled using minimal set pieces that are moved easily in and out. One example of this is having the front of the Empire State Building opening up as Buddy goes through the revolving doors and then believably steps out of the elevator into the offices of Greenway Press.

The costumes, designed by Gregg Barnes, seem to have been kept understated in order to make Buddy in his bright green suit and striped tights pop out and appear even larger. I did not find the lyrics by Chad Beguelin to be very memorable. It is a challenge to write a song that can tell a story and still be catchy. Of course, many other musicals have done just that—time will tell whether Elf will become one of those enduring classics.

Matt Kopec, playing Buddy, does a wonderful job of bringing the childlike qualities of Buddy to the life, despite following Will Farrell, who will always be Buddy in the minds of most who have seen the movie. Drew Pulver as Buddy’s dad Walter, Julia Louise Hosack as Emily the sympathetic mom, Connor Barth as Buddy’s brother Michael, and Kate Hennies as Buddy’s love interest all do an admirable jobs as they help Kopec move the story along.

Elf the Musical is not Irving Berlin’s White Christmas—but it doesn’t pretend to be. Instead, it is a lovely story of a young man venturing out into the world to find himself and spreading the Christmas spirit.