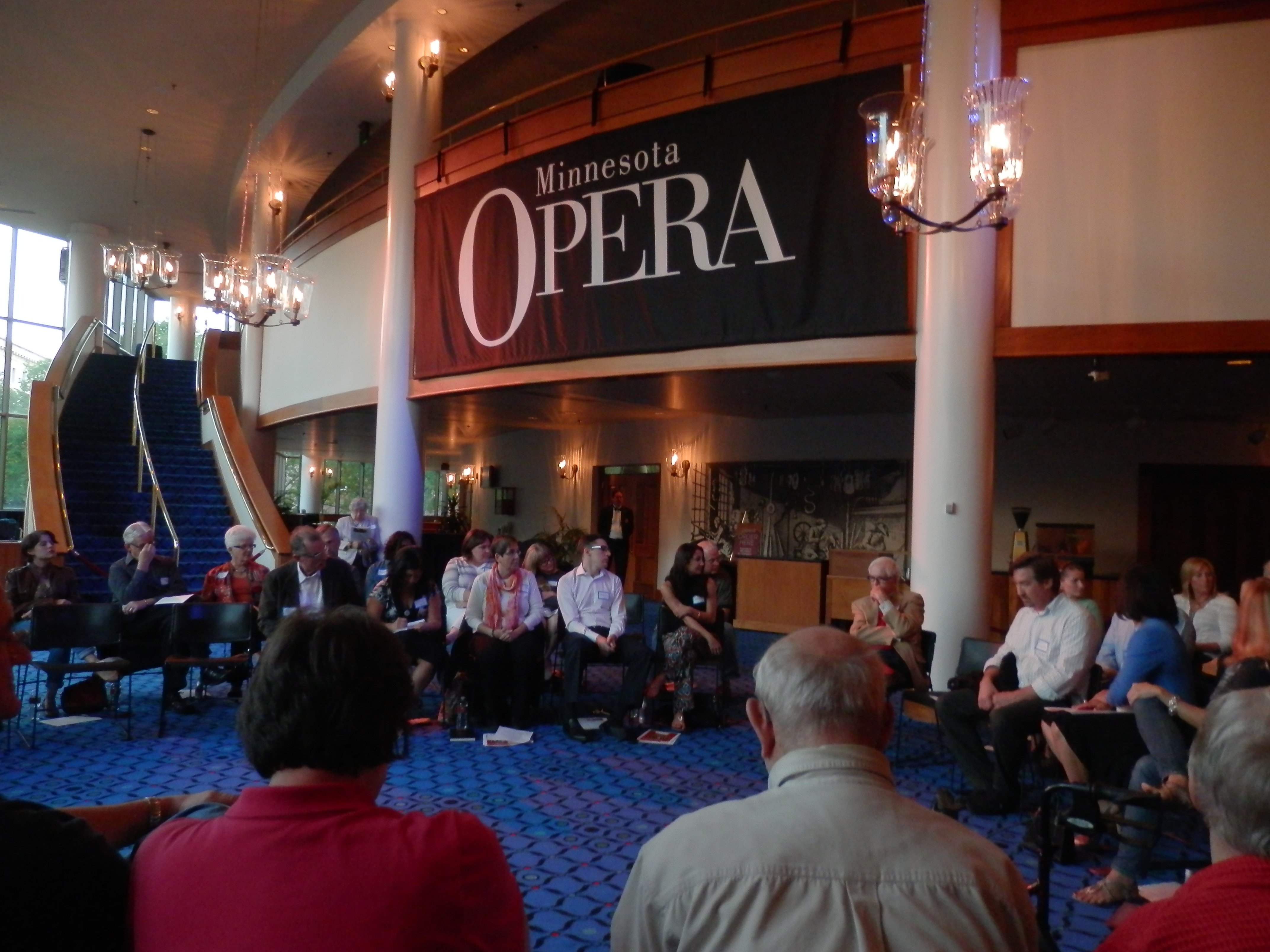 With the Asian American community hurt and angry about the Ordway Center’s decision to continue showing Miss Saigon,  you’d think that the Ordway Center would do its best to reach out and invite Asian immigrantsor Asian American leaders or organizations to their ‘community conversation.’ But as I walked into the room, I quickly realized that out of the 50 or more people that were there, I was one out of five Asian Americans/ immigrants present. It maybe the Ordway Center’s lack of commitment to a real conversation to do outreach, or simply the Asian community of Minnesota sees little importance in having yet another conversation, but it was apparent that the conversation lacked any sort of real compassion, action, or commitment to challenging racist art forms.

Many of the attendees stated that they had already bought their tickets, and didn’t even know that there were protests against Miss Saigon. Some said they didn’t see a problem because it’s not really an Asian story but a human one. “This is a common story! One that has happened to every group of people, not just Asians. This is about war,” said one of the attendees.

The writers of Miss Saigon also wrote Les Miserables, which also has a character who was a prostitute, but we don’t associate French women, or white women, with prostitutes, do we? You wouldn’t see French women boycotting Les Miserables, right? To say that Miss Saigon doesn’t perpetuate harmful stereotypes because it’s a human story is to ignore that that race matters and racism still exists. People of color don’t have the privilege to be carefree about such portrayals of their race, because when there are such representations, it matters, and it hurts.

Ordway Vice President and Producing Artistic Director James Rocco stated that he protested the showing of Miss Saigon in the 1990s, but has come around and see the value in the musical now. The musical serves as a way to talk about hard issues and sparks interest in these issues.

But a reply from an attendee was on point when she said: “Why do I have to bleed in order for you to learn?”

Why do we have to feel hurt and angry about the constant portrayal of our community, so that you can learn, feel something, and be entertained? Can’t conversations be had about sexism, war and violence, death, prostitution, military bases, and racism without such plays or musicals like Miss Saigon? Of course, but the purpose of Miss Saigon is not to spark meaningful conversation; instead it’s just another copy of a common narrative we see in the US that reaffirms the values and beliefs that people of color are second.

The argument that this is art weighed in heavily during the discussion. Many of the attendees stated that art was meant to be thought provoking, challenging, controversial, and outside the box; Miss Saigon is art, and should be appreciated for the lessons it teaches us.

I originally attended this conversation with the Ordway Center because I wanted to cover this story and the different viewpoints, but as I sat through the conversation, taking notes and pictures for a story I wanted to write, there weren’t many different viewpoints at all. Certainly, at this point, the Ordway has already booked Miss Saigon and will not discontinue the show, but why not commit to not showing Miss Saigon again? Or even commit to having it’s Cultural Board review musicals like this before putting it on? There are many ways to show commitment to diversity and respect, and that night I didn’t feel any of that. It was simply to ‘learn’ again.

The majority of the people there had good intentions. They’ve been ticket holders for a very long time, and wanted to see the famous Broadway show. Many of them didn’t understand why people would protest the show, but isn’t it chilling to think that a group of people, one that is barely visible in mainstream society and use to discrimination, is crying out and saying “this hurts us,” while the majority says “I don’t see anything wrong with it?”

I do commend the Ordway Center on their mission that the show must go on regardless of who they hurt or alienate, but since the Ordway Center has been painted in this light, its integrity for the arts and for the communities in Minnesota is going to continually be challenged by its history of contradictions. Just because Miss Saigon finishes its run in their theater and closes its curtain, doesn’t mean the show ends.