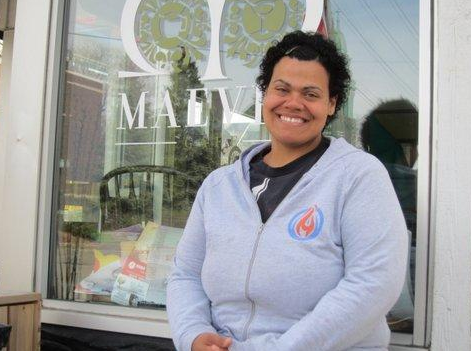 Lena K. Gardner, one of the core leaders in the local Black Lives Matter movement, is about to graduate from United Theological Seminary of the Twin Cities (UTS) with an M.A. in Justice and Peace Studies.

Growing up, her family steered clear of the church intentionally. Her grandfather was a conservative Baptist preacher and some of his ideas were oppressive, she said. Still, her parents instilled in her the values of giving back to her community—specifically the black community.

After undergraduate school, she began “dipping her toe” in politics, working on gubernatorial campaigns. She decided to go to seminary in part because she wanted to have a better framework for making ethical decisions in public life. She also wanted to become more familiar with the Bible and religious foundations that others had that she did not. And she wanted to learn how to be more effective in her community work. “A lot of my activism was not effective … because it was coming from a place of anger,” she said.

Gardner chose United, an ecumenical seminary in New Brighton with about 140 full- and part-time students. It long has championed social justice as an important part of its training, but social justice is getting a new emphasis and approach there.

Dr. Barbara Holmes, United’s president, said the school’s new strategic plan focuses on three areas: justice, reconciliation, and faith in public life. “We changed our tagline to “Education for Transformation,” she said. “How do you do that in a society that is conflicted around issues of race and gender and sexuality? We dare not send ministers out into congregations without adequately preparing them to be transformers of society—not just proclaimers of the word, but also proclaiming and transforming.”

And United is not just training future ministers. Some students like Gardner do not see themselves becoming pastors, at least not right away.  According to the Association of Theological Schools, the accrediting body for 273 seminaries in the United States and Canada, only about 50 to 60 percent of seminary students become pastors; the others follow different paths.

At United, Holmes said “we are preparing students for however they are called.”

How do you teach justice?

The word “justice” appears 130 times in the New International Version of the Bible, according to Biblegateway, an online search tool. For instance, Proverbs 21:15 says: “When justice is done, it brings joy to the righteous but terror to evildoers.” That gives seminary students plenty of opportunity to parse and reflect on the concept of justice.

But it is one thing to talk about justice, and another thing to actually do it. What do seminaries teach to prepare students to do justice?

Daniel Aleshire, the executive director of Association of Theological Schools, estimated that one third of the ATS schools include justice work in their curriculum. There are many different approaches. For instance, the historic peace churches—the Quakers, Mennonites and Anabaptists—focus on issues of peace and war. A seminary like Meadville Lombard Theological School in Chicago has developed a medical school model where students move through a series of rotations, and one of those rotations is on community organizations.

“When you look at justice broadly, is it about war and peace? Is it about race? Is it about environment?” Aleshire asked. “Most [seminaries] would not focus on all of them. They would tend to focus on some of them.”

And that, in a nutshell, is the problem, says UTS professor Steve Newcom.

“A lot of the justice training that happens actually focuses on injustice—whether it is issues of racial profiling, treatment of Native Americans, climate change or other specific issue,” he said. “The training does not look at how to transform the problem with creative solutions.”

Frustration with the progressive church

With Newcom’s help, United is developing a radically different approach to training students in justice work. United’s goal is to provide students with the leadership and practical skills they need to be powerful agents for social change, regardless of the particular issue they or their congregations choose to work on.

[Full disclosure: I have collaborated with Newcom on a volunteer project.]

Newcom is an ordained minister (Community of Christ Church) and a UTS graduate (1980). But he also worked for 18 years as the executive director of the Headwaters Foundation, which supports grass roots work in a variety of social justice causes. Newcom fondly refers to his time at the foundation as “Liberation Theology meets philanthropy.” But watching the social justice landscape, he felt a growing frustration with the progressive church’s ineffectiveness in getting its message out and having an impact on the issues he cared about.

Newcom got a Bush Fellowship in 2006 to research how the church could be a more effective force for social transformation. His fellowship allowed him to research how seminaries were teaching social justice, and what was working and what was not. His big “Aha!” moment was realizing that seminaries were teaching social justice on an issue-by-issue basis rather than teaching the generic skill sets of social transformation.

Newcom developed a model identifying six key elements that faith leaders need to understand if they want to promote social change: 1) encounter experiences, such as immersion programs and global justice trips; 2) issue education, with a focus on faith and beliefs; 3) advocacy on issues and legislative action, such as the work done by the Joint Religious Legislative Coalition; 4) faith-based community organizing, such as the work done by ISAIAH; 5) catalyzing large scale social changes, such Black Lives Matter; and 6) proclaiming, such as he work done by Faith in Public Life or Nuns on the Bus which offers public expressions designed to reframe world views.

Churches and church leaders typically are more comfortable doing education and encounter programs, Newcom said. “It is a jump to get to advocacy and organizing.”

Newcom went on to join the United Seminary staff and found the Kaleo Center for Faith, Justice and Social Transformation to pursue teaching this model.

ATS’s Aleshire would argue that other seminaries—like United—are teaching the nuts-and-bolts of justice work. But what makes United’s approach unique, Newcom says, is building an integrated curriculum around it these six strategies of social change. To Newcom, no one strategy is more important than the other. To be effective, you need them all.

“They are not random tools in a toolbox,” he said. “They are an integrated set of tools.”

One key piece of United’s training is a 400-hour practicum with a social change organization.

Gardner did her social justice practicum working with the Minnesota Unitarian Universalist Social Justice Alliance (MUUSJA, affectionately referred to as Moose Jaw). It was her first exposure to community organizing. She worked with Minnesotans United around the Marriage Amendment and supporting the freedom to marry, and she worked with Take Action on voting rights issues. Her main focus was working with people at her church and other UU churches on “how to have those heart-changing conversations to change people’s votes.”

What did she learn? First, that organizing is messy. Second, no one can tell you the right way to do it. You can learn what tools might have worked in the past, but you always are adapting to new situations. She learned a lot of soft skills: patience, compassion, and clarity about why she was doing the work.

“I learned how to temper my sense of urgency so that people can hear me better,” Gardner said. “It’s like this weird sort of paradox. These problems I feel so pressing in my heart and my mind and my soul, but that actually turns people away.”

The work led to a shift both in her spiritual journey and at her learning at the seminary. “I had to reflect a lot in the practicum about my own messiness as a human, and on just the challenges of organizing people,” she said. “We all lead complex, full lives. And trying to organize people in that context is just inherently challenging.”

The Art of Ministry

In the fall of 2014, United elevated social justice training to what it calls an “Art of Ministry.” This is a term used for the core areas of seminary teaching, those basic skill sets that ministers need to know to do their job well. Other Arts of Ministry are skills such as preaching, counseling, administering, or working with volunteers.

When seminaries teach a subject like “preaching” as an art of ministry, Newcom said they do not focus on all of the conceivable sermon topics someone could preach on. They focus on the skills needed to write and deliver a good sermon. They are now doing the same thing with justice. Instead of focusing on an infinite set of justice issues, they focus on the skills needed for encounter, education, advocacy, organizing, movement building, and proclaiming.

The bottom line is that “we all do what we know how to do,” he said. “If we are not training pastors to know how to do justice ministry, they will do the things they know how to do. They will preach, they will do pastoral care. But they may avoid taking on justice concerns because they don’t feel confident to do that.”