If you’re reading this, you very likely already know more than a little about the proposed “Trans-Pacific Partnership” trade agreement. Now, I have seen claims from the left about this that likely cross the line into hyperbole; if it goes into effect as it exists now, it won’t really mean total corporate world takeover and the end of all hope. But it unquestionably is a very bad deal, and needs to be blocked, or at least cut way, way down to size. Thankfully, there are growing grounds for optimism.

The TPP is becoming politically toxic. Over the last year there has been a steady stream of emails and phone calls to Congress. Members have faced constituent meetings and protests where TPP is being raised. Some examples of protests: Los Angeles, Seattle, Washington, DC, Salt Lake City, Minneapolis, US Trade Rep Office, Vancouver, Leesburg, New York City, . . . we could go on. Americans have sent a clear message to Congress members that they better not be associated with the TPP in an election year.

Five members of the Senate Finance Committee told US Trade Representative Mike Froman they will not support the Baucus Fast Track bill because Congress needs to be involved throughout the process not just in an up or down vote after it is completed. 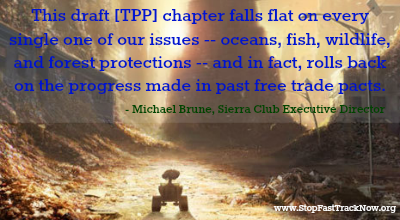 This would also be a huge black mark on President Obama’s legacy. But on this matter, he is presumably sunk in motivated reasoning. As we all are, about some things and to some extent, but certainly some much more than others, and politically, that “some” are called “conservatives.”

And here’s a good reality check about NAFTA. Contrary to the tidal wave of drivel from the rich man’s bootlicking propagandist curs, it’s been a horrible deal for Mexico‘s poor, too.