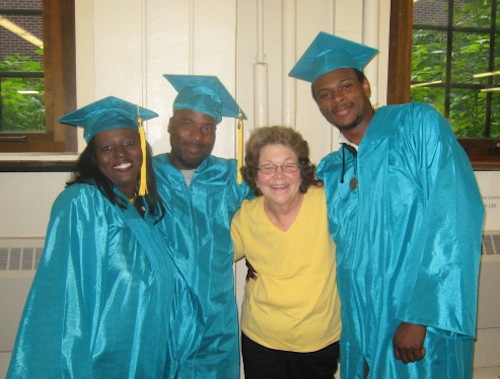 A difficult relationship. Mounting childcare costs. Poor access to educational facilities. The urge to give up.

“Accountability, unity. That’s what FATHER means to me,” says Carlos Hines, a participant in the non-profit project. “The support here is phenomenal. This is a good resource for building bridges into society, stronger family, and employment. It also helps you build yourself as an individual.”

FULL DISCLOSURE: Forrester Pack is a volunteer in the FATHER Project.  He says: “I feel I’ve had the opportunity to help others in a simple, yet transformative fashion. The wonderful participants and mentors of the organization explain the power of the FATHER Project in more eloquent words than I ever can.”

Headquartered at 2700 Lake Street in Minneapolis, the FATHER Project became an official program of the Goodwill-Easter Seals Company in 2004. (From1999-2004, it was administered by the City of Minneapolis.) Today, the FATHER Project operates in St. Paul, Rochester, Park Rapids, and St. Cloud, as well as Minneapolis. Its mission: to “assist fathers in overcoming the barriers that prevent them from supporting their children economically and emotionally.” The FATHER Project’s website explains that it incorporates educational mentoring, training, and testing skills as well as political advocacy, all under one roof.

“Employment, education, mental health, legal issues — these are challenges or barriers to success that we address through a specific menu of services,” said Guy Bowling, 2012 Spirit of Fatherhood Hall of Famer and manager of the Minneapolis facility. “We have an array of collaborative partners in the community, over 20 in fact.”

During a recent interview at the Lake Street facility, Bowling said: “I feel that having two loving parents in a household is vital to a growing individual’s success. In addition, education, role models, expectations, and a strong surrounding support system lead to a cadre of healthy citizenry. We provide the opportunity and individual stability to assist one in achieving self-sufficiency.”

Volunteers and mentors work closely with participants looking to change their respective situations regarding life, family, or finances. Together, the participant and the volunteer build a relationship, talking and listening to one another. Just having the opportunity to talk to a willing listener is important to participants.

“12 students earned their GED degree through the FATHER Project in 2012.

” 69 participants were placed in jobs by the FATHER Project… Rhe average wage for initial placement among this group was $10.34 per hour.

“91 percent of participants report that the FATHER Project increased their commitment to financially supporting their family.”

A recent program graduate, Keith Goss Jr, talked about his experience. “I entered last month, and FATHER gave me an opportunity to better myself,” Goss said. “It impacted my life in a large way, as I was going through things regarding my family. I was seeking the GED portion, but I also used other tools of the FATHER program, like job search assistance, and learning about career training from the volunteers.”

“FATHER has existed for a while, but not a lot of people seem to know about it. I hope more people utilize the great resources offered,” Goss said.

Want to get involved?

Further information on the program can be found on its web page or on its Facebook page.

Photo courtesy of the FATHER Project

Photo courtesy of the FATHER Project