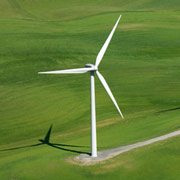 The deal to avert the ‘fiscal cliff’ legislation included a one-year extension of the federal Production Tax Credit (PTC) for wind generation. Had the PTC expired, its estimated half of the country’s 75,000 wind industry jobs would have been at stake, 2,000-3,000 of which are in Minnesota.

Although the extension will save many more thousands of jobs and prevent millions of tons of CO2 emissions from being released into our atmosphere, industry employees and investors of wind energy continue to advocate for greater certainty in federal policy.

However, the one-year extension doesn’t solve a continuing tradition of unpredictable federal policy that has left the industry in a boom-and-bust cycle. This was the fourth time in the last 14 years that the PTC has expired, each time decreasing wind installation in the U.S. by 73% – 93% compared to the previous year (AWEA). In 2012 wind was the fastest growing energy sector in the country, with installations existing in all 50 states, and manufacturing in 44 states.

The legislation did make at least one improvement when it changed the eligibility stipulations, requiring that a project only need to be initiated in 2013 to receive the PTC, not fully completed. While this language provides investors with greater opportunity to access the incentive, a one-year extension is not a viable solution for an industry that requires 18-24 months to complete a project.

The federal wind PTC is 2.2 ¢/kWh, and applies to the first 10 years of operation. As Will Nissen wrote in an earlier Minnesota 2020 piece, “This may not seem like much, but when you match it to the cost of building and operating a commercial-size wind farm it gives wind development a sizable economic boost that makes it more competitive with traditional energy sources like coal, natural gas and nuclear.”

He went on to compare the PTC with other energy pricing:

“The The U.S. Energy Information Administration indicates that the average total levelized cost (or break even price) for wind farms entering service in 2016 is roughly 97 $/MWh. This includes upfront capital costs, fixed operation and maintenance costs and estimated transmission investments. A 2.2 ¢/kWh tax credit for wind-produced electricity equates to a 22 $/MWh drop in that total cost, bringing it down to 75 $/MWh. This helps make new wind farms more competitive with new natural gas plants (break even price of 66.1 $/MWh), and cheaper to build than new coal (94.8 $/MWh) and nuclear (113.9 $/MWh) power plants.”

Minnesota’s wind potential is ranked 12th in the U.S. based on the area of land available for development (NREL). With one of the most rigorous Renewable Portfolio Standards (RPS) in the country, Minnesota has the potential to create thousands of wind manufacturing jobs, especially if federal incentives were less incremental. More predictable policies, like the bill supported by Representative Reichert (R-WA) and Representative Blumenauer (D-OR) in November, 2011, that laid-out a four year PTC extension, would result in greater benefits for wind industry establishment and job growth than four, one-year PTC extensions. According to Navigant Consulting, PTC policies that have a longer time horizon, such as four years, would result in 2,500 to 5,000 Minnesota manufacturing jobs between now and 2016.

In 2011, 12.7% of Minnesota’s power was generated by wind (EIA), but this is less than half of the renewable energy generation needed to satisfy the state RPS. That same year, the Production Tax Credit helped Minnesota be fourth in newly installed wind capacity. The effect of the PTC continues to be substantial for Minnesota, as the benefits do not just affect developers, but land-owners, rate-payers, and rural and suburban communities across the state, providing rent, reduced energy rates (AWEA), and a more distributed tax base for the future. With proactive investment today, Minnesota would be well situated to take advantage of future commerce not only in-state, but across state lines, as MN is adjacent to four other top wind potential states.

While we should take advantage of the PTC in 2013, Minnesotans need to tell their local and federal representatives that they support federal wind energy policies that provide certainty over a longer period of time, maximizing the benefits of government investment and Minnesota job growth. At the federal level policymakers need to be building support around this issue to ensure the passage of a multi-year PTC extension before late this year. At the state level there are also opportunities for policymakers to help create a more stable environment for wind industry growth while federal policies are not providing the needed predictability.