Minnesota finally passes marriage equality (otherwise known as legalizing same-sex marriage)! After a grueling campaign to stop the government from defining marriage as strictly between one man and one woman during last year’s election, supporters of marriage equality finally saw the governor sign the bill into law on Tuesday, May 14, 2013. That makes Minnesota the 12th state in the country to pass marriage equality. What does this mean for the Hmong American community? Hmong Americans who are lesbian, gay, bisexual, transgender, or queer (LGBTQ) will now be able to marry their partners. This will set a new precedent for us to rethink about our community and what is in store for us for the future. How will marriage change for us as Hmong Americans? Hmong LGBTQ may not be able to marry the “Hmong way,” but they are certainly going to do so the “American way.” Even then, we will all have to start rethinking how we see “family” and “community” in Hmong American society. 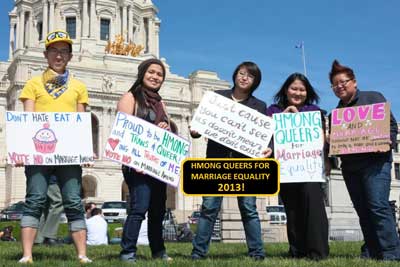 On the day in which the Senate passed marriage equality, I was rallying at the state capitol with other Hmong LGBTQ. An older Hmong woman had came to rally against marriage equality. Her concern was based on the fact that Hmong LGBTQ will not be able to procreate. She was concerned with the complete restructuring of Hmong society, in part through the change in gender roles. She says that Hmong men are to bring home their wives while Hmong women are to leave to go live with their husbands. She says this fundamental aspect of what is Hmongness will disappear if same-sex marriage is legalized. Will Hmong culture and society disappear? No. Will our culture and heritage change? Yes. However, she was compassionate. If, she says, we are comfortable with this change in Hmong society, then so be it, let the queers marry each other. My friends and I who were talking with her told her that we are comfortable with that. We are lesbian, gay, bisexual, transgender, and queer. We are comfortable with that and we are comfortable with rethinking the way we see and live our lives as Hmong American LGBTQ individuals. 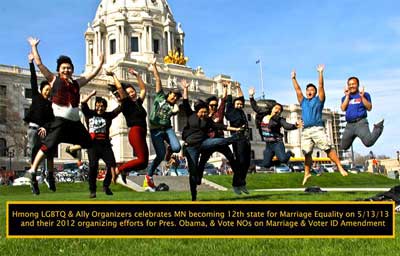 There was also an elderly gentleman who was shouting and rallying against same-sex marriage. He was shouting at the top of his lungs, “Dlaab Ntxwg Nyoog yuav coj mej moog dlaab teb.” This did hurt me, but I have heard this all before. I have heard people telling me that I will go to hell and that I will be ruined. We, as Hmong American LGBTQ, have heard this all too often. As it turns out, he was from the Hmong Alliance Church. There is still a lot of opposition to marriage equality and to being LGBTQ within American society. Yet, I am optimistic that through marriage equality, more Hmong American LGBTQ will stand up for their own rights and voice their opinions on issues that matter to them. I believe that our Hmong American brothers and sisters will begin critical discussions about gender and sexuality. We will talk about being LGBTQ openly and positively.

Hmong LGBTQ are very much attuned to the Hmong culture and heritage. We are seeking to establish our place in this world by understanding our culture, our communities, and ourselves. Marriage equality will allow us to legally and formally participate in marriage with our loved ones. Yet, it is also an opportunity for us to become visible to the rest of the Hmong community. It is also an opportunity for further collaboration between the Hmong LGBTQ community and the larger Hmong American community. It is a time for us to talk about the different experiences that we as Hmong Americans hold as part of the refugee community. Now is the time for us to speak to each other on how our values differ from one another in order to achieve the full potential that all of us as Hmong Americans have in this country.

Let us not be fooled that marriage equality will be the end of the LGBTQ movement. We still want our communities to participate in our struggles and our lives as people who are living on the outskirts of society. We indeed will be more visible because of the legal passage of same-sex marriage, but not entirely if we cannot participate in the larger Hmong American community. We will be making videos, writing books, and making artwork to depict our identities as LGBTQ people. The Hmong culture with its unique history of migration and struggle is deeply rooted within our identity. And that is the perfect opportunity, along with this marriage equality bill, for us to spread to the world that we have always been here and will remain here.

There are hundreds of Hmong individuals in the Twin Cities who identify as LGBTQ. We only come out to celebrate in private spaces such as our own homes or at the lesbian and gay clubs and bars. We are still unable to speak to our parents about what it means to be LGBTQ. This bill will allow those who are in relationships to marry, but it will allow for those who are not in relationships to come out and be open about who they are. Hmong LGBTQ people come from all over the United States to come to the Twin Cities to seek community. Legalizing same-sex marriage in Minnesota is another reason that the Hmong LGBTQ community in the Twin Cities is going to grow even bigger.

Hmong Americans will slowly begin to know and see Hmong LGBTQ in public spaces. Whether this is at Hmong Village, Golden Harvest, Destiny Café, or the Hmong New Year. I call for all Hmong people to celebrate this bill together. I call for all Hmong people to begin the conversation not just about being lesbian, gay, bisexual, transgender, or queer, but about the shifts in Hmong culture. What do we say or do when we see lesbian or gay Hmong Americans? What do we tell our parents? What do we say when we go to church? Being Hmong means more than just marrying. When we marry, our lives do not end there. We begin to participate in the community and in our families. Legalizing same-sex marriage in Minnesota will surely allow Hmong LGBTQ to speak about their lives, but it is also the time for all Hmong people to start talking about what it means to be Hmong, to be lesbian, to be gay, to be bisexual, to be transgender, and to be refugees in the new era.