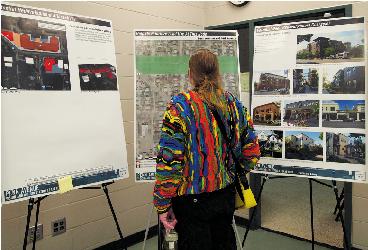 Seems like soon as I arrive at one of these open houses for community transit planning, there’s a particular biking enthusiast who pounces and bends my ear for a few minutes. The Nov. 13 open house for Penn Avenue planning held at the Harrison community center was no exception.

Among the issues on the table: Bike lanes on Penn Avenue North. Detailed charts on big boards showed the pros and cons of moving bikes off of Penn to either Queen or Oliver, and City of Minneapolis officials have apparently concluded that neither one is feasible because of the parks and schools that are in the path, so bikes have to be accommodated on Penn.

The planning process was driven by Hennepin County’s intent to put enhanced bus service on Penn Avenue, and the desire to see it drive economic and housing development in the neighborhood – solve all sorts of problems, create opportunities while they’re at it. The city is partnering in the process with Hennepin County; it’s my impression Hennepin County is neutral on bike accommodations but city officials are pushing.

There are three options being floated to put bike lanes on Penn and to make that thoroughfare more pedestrian-friendly. Some parking is lost in any of the scenarios, and traffic is down to one lane each way. 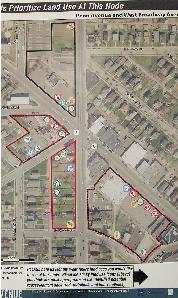 It’s common wisdom in traffic planning that if traffic can move smoothly, rather than in stops and starts and weaving in and out, drivers will use a route even if it appears to move slowly, and that is ultimately safer. I agree, “four lanes on a freeway are only as good as the jerks at the front of the pack,” I’ve often said.

Those who attended the open houses could see examples of increased-density commercial development at the nodes: 44th, Lowry, Broadway, Plymouth, Glenwood. And there were scenarios for adding high-density housing at the new light rail station area at Olson Highway.

In the middle photo at right, a group of Hmong students who got experience riding the Blue Line Hiawatha light rail as a way of helping decide what they think about the Southwest Light Rail, talked about their experience with Kelsey Dawson Walton, representing Hennepin County.

A prominent disclaimer posted: “Concepts do not represent actual development proposals and are for discussion purposes only. They do not imply that development is or will be supported by property owners, the community, or government leaders.”

I’m betting most property owners will privately say “sure, just buy me out for a decent price,” or “help me finance my expansion/new building.” 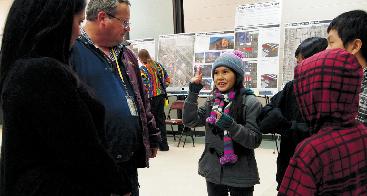 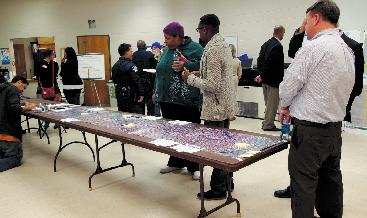 The open house format lets people pop in and out, talking to planners about the areas closest to their home or business. They are, after all, the on-the-ground experts in how things work or don’t work now. One can only hope they are really listened to, along with the “experts” on big picture things.

Some come toward the end to see what comments others have written, and add their own. At this particular session, people were given stickers to place on aerial views, that indicated ideas of what should go on vacant land, or in place of current buildings.

For example, in the picture above there were three stickers for “retail” along Broadway on the Capri block, and one for dining, one office, and one for townhome along 23rd. One sticky-note writer asked for a plaza on the southwest corner of Plymouth and Penn, with dimmable lights for showing movies.

Others asked for transit bus shelters on Glenwood, and “fix the Route 9 reliability.” Someone else said, “Near North needs a gas station.”

There is a survey app posted online, along with all sorts of information on the planning process, at: www.hennepin.us/residents/transportation/penn-avenue-community-works. Contact Kelly Hoffman at pacw@hennepin.us, phone 612-348-8276.