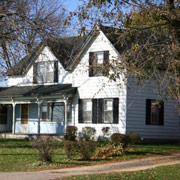 These are part of ongoing USDA efforts that blur the distinction between so-called “safety net” and “stimulus” actions that in the past enjoyed bipartisan public support. What’s more, data on people and communities affected show these programs work.

“We are one of the best kept secrets in Minnesota,” said Colleen Landkamer, USDA Rural Development state director. “We’re not happy about that. Everyone should know what these programs do and the impact they have.”

The linkage between jobs and the housing market has never been clearer than during the lingering slow economic period coming out of the Great Recession. USDA programs helped create more than 1,000 new rural jobs in 2011 and stabilize or retain thousands more. Agriculture is the state’s second largest employer and manufacturing is the largest, according to the University of Minnesota Extension Service, and long-term public investment is critical for both.

On a positive front, data assembled by HousingLink for last year’s third quarter showed 4,935 homes were foreclosed on statewide, which was the lowest number for any quarter since 2007, the realty tracking group said.

At the same time, mixed signals on the housing markets were found in the Minnesota Housing Partnership’s periodic “2 x 4 Report” for the third quarter, the last quarter for which data are available and consistent with the end of the 2011 fiscal year for USDA. Pre-foreclosure notices issued in the quarter increased to 14,600, up from 13,400 in the same quarter a year ago, and the partnership noted that 85 percent of the notices were in the Twin Cities metro area with suburban Hennepin County the hardest hit.

Data from Minnesota’s Department of Employment and Economic Development suggests a brightening jobs picture in rural communities. Unemployment numbers have decreased in all 12 rural statistical regions from November 2010 to 2011, with all of western Minnesota showing significant improvement along with the state’s southeast corner. Many of these areas have seen full percentage point unemployment decreases.

Again, USDA Rural Development programs play a foundational part in this recovery. Other highlights from these programs for the 2011 fiscal year include:

This was done through various direct loans and loan guarantee programs administered by Rural Development, Landkamer said. In addition to the housing loans and guarantees, rural business programs received $44.4 million in financial aid and assistance, $42.5 million was provided for community facilities, $32.9 million was made available for water and wastewater infrastructure, nearly $117.2 million in electric loans were provided to local utility cooperatives that are instrumental in rural economic development, and 422.4 million was provided to firms and groups expanding broadband coverage in rural areas.

Such projects stimulate local economies with job creation even though they are part of the ongoing USDA programs to support rural regional economic prosperity. This will help even more rural Minnesotans qualify for home ownership that will, in turn, also help revitalize communities. Landkamer said Congress has maintained funding levels for the current year for USDA to guarantee single-family home loans.

All this leads to steady even if slow economic improvement in rural Minnesota. If these programs’ vital roles remain somewhat obscure, here’s a partial explanation that all Minnesotans should remember:

Most of these USDA programs are lumped under authorization and appropriations bills that too simplistically get called “the farm program.” The main authorization for these programs is up for review and renewal by Congress this year. It should be clear that “the farm program” impacts the quality of life and economic health of all Minnesotans.