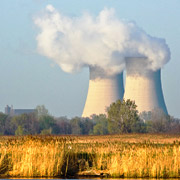 What happens when you take two of the state’s three nuclear generation units offline at one time? Well, apparently not much. Last week’s temporary shutdown due to a leaky pipe and exhaust leaks didn’t result in escaped radiation or produce much of a ripple in the electricity grid.

But the shutdowns at the Monticello and Prairie Island nuclear plants bring attention to the fact that these units are over 41 and 38 years old, respectively, using technologies installed in the early 1970s when nuclear plants were just starting to be built on a large scale. In fact, of the 104 nuclear generation units operating in 2009, Monticello and the two Prairie Island units were the 8th, 24th and 31st units to go online in the U.S., respectively.

Nuclear power has been a staple for providing continual, uninterrupted electricity in Minnesota for some time. Our state has steadily generated a little over a quarter of its electricity from nuclear sources since 1990, according to the U.S. Energy Information Administration. Even as coal has given way to wind and natural gas, nuclear has remained an electricity-generating workhorse.

There are safety and waste disposal concerns with nuclear power that have not diminished over the last 40 years. Earlier this month, the U.S. Nuclear Regulatory Commission (NRC) put 19 ongoing final reactor licensing decisions on hold, including licenses to construct and operate new plants as well as renewal licenses for existing plants. The NRC will address the fact that our country still has no plan for the disposal of spent nuclear fuel, beyond holding it indefinitely at reactor sites, before issuing more nuclear licenses.

Xcel’s Monticello and Prairie Island plants received 20-year license renewals in 2006 and 2011, respectively, so they are not in danger of being shutdown soon due to federal actions. But these plants are becoming more expensive to operate as time goes on. Last year, Xcel said it would spend $500 million on maintenance through 2015 on the Prairie Island plant following its license renewal. This combined with potentially cheaper electricity options available on the power market means nuclear power may not be economically competitive in the coming years.

A 2009 report from the Organization of Economic Cooperation and Development and International Atomic Energy Agency found that at 2008 consumption rates, total identified resources of uranium supplies is sufficient to supply nuclear power plants for over 100 years. The United States, however, purchases much of its uranium supply from other countries, and the price we pay to deliver that uranium to our power plants rose significantly in the latter half of the last decade.

So while fuel supply for nuclear power plants may not be at risk in the coming years, we rely on other countries to provide that fuel at increasingly higher costs. Of course, we haven’t solved the issue of what to do with all the hazardous spent fuel that is leftover from the electricity generation process.

Even if we decide to shutdown our nuclear plants, the decommissioning process can take decades. Some plants that shutdown in the late 70s do not expect to be fully decommissioned until 2036, as strict precautions must be taken to ensure that radioactively contaminated equipment and locations are safe to the public. In short, we will likely have these plants in some form or another for a long time.

The rest of our electricity generation infrastructure is changing. Coal is facing a downward spiral while natural gas and wind are scaling up. Nuclear has stayed steady but our plants are hitting or are past the 40-year mark and there is currently a moratorium on new nuclear plants in Minnesota.

The two downed Xcel units were back online and ramping up to full power earlier this week, but at some point these plants will need to go offline. It is becoming expensive to upgrade current plants or build new ones with current technologies, when there are cheaper energy sources available in the short and long-term that do not carry nuclear energy’s spent fuel burden.

In the coming years, we need to make sure we have a reliable, clean and economically feasible electricity generation structure in place so we can start moving forward with decommissioning our aging nuclear power plants.