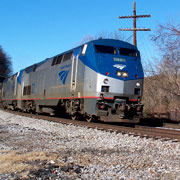 It’s become so commonplace that it barely makes news, but Amtrak just reported its eighth ridership record in the past nine years. In the federal fiscal year that ended Sept. 30, 30.2 million passengers boarded U.S. intercity trains, a 5 percent increase over fiscal 2010.

On top of that, ticket revenue of $1.9 billion for the national rail passenger system was up more than 8 percent, indicating growing market appeal.

These figures are all the more impressive considering that flooding in the Upper Midwest and hurricanes and record snows in the Northeast disrupted train service for significant periods. Meanwhile, Amtrak, long unfairly portrayed as a symbol of galloping government subsidies, is covering more than 85 percent of its operating costs from fares and advertising revenues. Compare that with the barely 50 percent of road and bridge costs drivers pay through user fees such as tolls and fuel taxes.

You won’t hear any of this in the autocentric conservative echo chamber, of course. Fact is, driving in the United States has remained essentially flat in good times and bad over the past decade, expanding its non-user subsidies, while both transit and intercity rail have surged. Amtrak’s passenger volume has grown 44 percent in that period.

And what’s really amazing is that Americans keep flocking to what remains mostly second-rate train service, at least compared with the speed, comfort and reliability of passenger railroads in Europe and Asia. Years of disinvestment in Amtrak are to blame for that. And now the conservatives are doing their darnedest to reverse President Obama’s efforts to upgrade the system.

The latest example of this comes from U.S. Rep. Chip Cravaack in a Star Tribune op-ed this week. He criticizes a recent $5 million federal grant for engineering studies on the proposed Duluth-to-Twin Cities Northern Lights Express fast passenger train, which he says “may make economic sense in the future, but … not … at this time.”

It’s probably wise for Cravaack, swept into office on Tea Party enthusiasm last year, not to rule out completely a transportation project desired by many of his northeastern Minnesota constituents. But no one’s talking about building the $750 million rail line “at this time.”

Preliminary engineering is just one early step in what may be a decades-long campaign to complete the NLX, which shouldn’t even be our state’s top priority for improved passenger rail service.

That distinction belongs to the long-planned Twin Cities-to-Chicago leg of the Midwest intercity passenger rail initiative, now facing a major roadblock thrown up by Cravaack’s conservative fellow travelers in Wisconsin. Where Cravaack really goes off the tracks, though, is in parroting the right-wing talking point that the pittance of federal money being devoted to rail development should be diverted to roads and bridges.

“The wisest course of action for us is to not spend money on a venture that can’t pay for itself,” he writes.”Instead, we must first attend to the crumbling roads, the bridges in urgent need of repair and the incomplete highway projects that we have throughout the state.”

Now, I’m all for a fix-it-first approach to roads and bridges. But let’s not fool ourselves that our vast motor vehicle infrastructure even comes close to paying for itself. It won’t as long as user fees for driving keep declining in real terms with the acquiescence of everyone from Grover Norquist to the president.

If Cravaack’s touchstone for transportation spending is really self-sustainability, his wisest course would be to boost investment in a mode that is steadily growing market share while moving toward paying for itself, and spending less on ever-more-subsidized roads and bridges.

Unfortunately, the Cravaacks in Congress are going in the exact opposite direction. Its intercity rail budget for the current fiscal year totals just $100 million — not enough to pay for even one of the 67 projects planned in the Chicago area to open up the nation’s biggest bottleneck for freight and passenger trains. Ground was just broken on a flyover railroad bridge there to eliminate a grade crossing shared by 130 trains a day. The cost: $133 million. By comparison, the Crosstown Commons highway separation project in Minneapolis cost more than twice that.

In another recent development, the Association of American Railroads said it will hire 15,000 people this year and another 15,000 in 2012. “These are jobs that are not going to be outsourced and shipped overseas,” said the association’s president, Ed Hamberger. “These are American jobs. They pay well,” as much as $100,000 a year in exchange for long hours, arduous travel and random tests for drugs and alcohol.

This railroad renaissance is being driven by high fuel prices pushing freight from trucks to trains. More semi-trailers are being loaded on rail cars for most of the journey instead of being pulled down the highway by a single tractor driver. That’s an economically efficient alternative that also reduces harmful tailpipe emissions.

The great growth of motor travel up until the past decade didn’t happen without massive government investment. The full promise of rail for moving both people and freight faster, more safely and more efficiently won’t be realized without a similar effort.