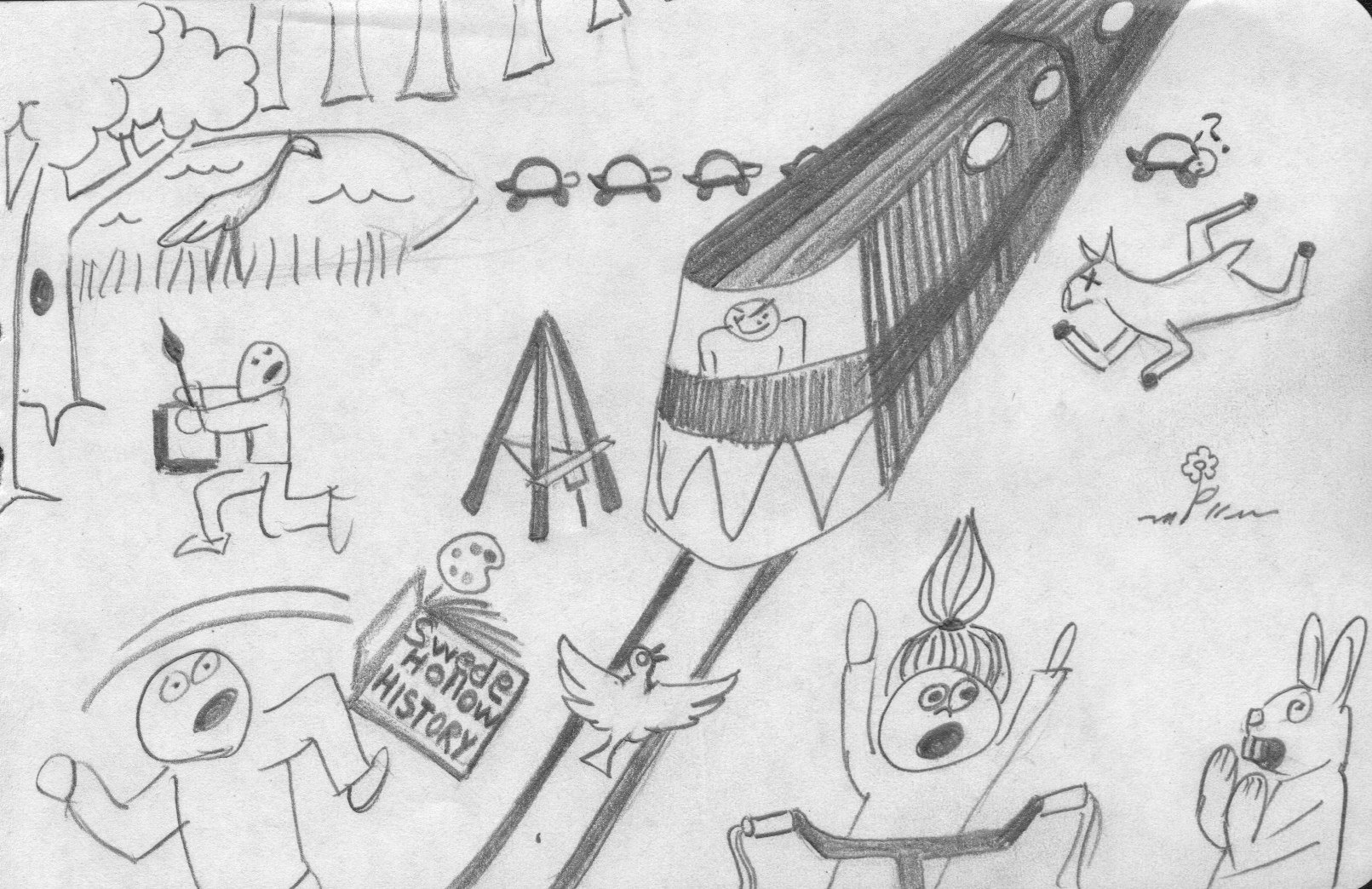 The cartoon above, by local artists Diane and Michael May, depicts what could happen if the Rush Line is allowed to be built through Swede Hollow Park.

Over the years since the Burlington Northern trains stopped rolling through Swede Hollow Park, it has become a beautiful, rich nature area full of wildlife right in the heart of the city of St. Paul. Visitors marvel at how when they are in Swede Hollow you do not know you are in the middle of a city. We believe the Rush Line would destroy the beautiful nature of Swede Hollow Park.

The Dayton’s Bluff Take-a-Hike started on December 5, 1990 as a way to show the world that the abandoned Burlington Northern Rail Line would make a wonderful recreational trail. The line was purchased by the Ramsey County Regional Rail Authority and the St. Paul section was leased to St. Paul Parks and Recreation, who developed the recreational trail. The trail was named Bruce Vento Regional Trail after a US Congressman who did much for the parks and trails and environment. The Take-a-Hike continues on the first Saturday of each month. The hike includes history of the community and now information on the light rail possibility.

The St. Paul Garden Club was the driving force in turning Swede Hollow into a city park, along with East Side residents and the St. Paul Parks Department.

Swede Hollow Park has been called “St. Paul’s hidden gem” by a local writer. Walkers and bikers enjoy the wooded Bruce Vento Regional Trail that passes through the park, where you may see wild turkeys, deer, foxes, turtles, and many other kinds of wildlife. The Park has provided educational opportunities for many schools including the adjacent Hope Community Academy and Metro State University. It is surrounded by historic structures such as the old Hamm’s Brewery, First Lutheran Church (celebrating 150 years), and the iconic 7th Street Improvement Arches.

Swede Hollow draws people from all over the Metro area and beyond to events. Swede Hollow Park has inspired music by Peter Ostroushko, and an original opera by composer Ann Millikan which debuted at Art in the Hollow. It is a favorite venue for Mixed Precipitation’s picnic operettas. The annual Art in the Hollow festival attracts talented local and regional artists and performers, and visitors from all over. The park also features a permanent sculpture known as the Swede Hollow “henge,” designed by local artist Christine Baeumler. There are many history tours of Swede Hollow attended by people from all over. Every autumn, Friends of Swede Hollow hosts a gathering called “Watch the Setting Sun on the Red Brick Brewery” at the henge, where some people who were born in the Hollow share their memories of this unique and beloved park.

Combining train tracks with animals, children, and adults in a ravine would likely be dangerous, irresponsible, and destroy a valued City Park and gathering place. If you would like to help us keep the Rush Line out of Swede Hollow Park, please sign our petition at www.change.org (click on Environment, then search for “Swede Hollow.”) For more information about Friends of Swede Hollow, email karin@swedehollow.org. For more information on Take-a-Hike, see the article on page 2 [of the November 2014 issue of the Dayton’s Bluff District Forum].